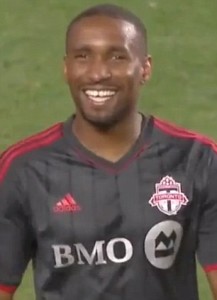 $7.5m for Altidore? Whatever you need to tell yourselves guys.

Remember yesterday when the vague unsubstantiated reports were of TFC getting a near MLS record fee for Defoe, with figures like $10m or $11m being thrown around. If not, here’s another one fresh from tonight from Kurt Larson  where ‘in the neighbourhood of $11m’ is the figure thrown out there. MLS record don’t you know!  Seemed impressive didn’t it? As if TFC had managed to play the game well, play all those desperate teams against each other and come up with a deal that came very close to if not surpassed what they actually paid for Defoe last year.

Well it seems like those numbers are all very vague for a reason. This was of course a player plus cash deal, so basically you have to minus the value of Altidore from that $10/11/whatever million to see just what cash TFC got. Who knows what that valuation might be?   Well, go to this article for TSN’s Gareth Wheeler, and it’s mentioned that to move ahead of TFC in the allocation order, New York Red Bulls and MLS were willing to give TFC $7.5m to make up for the fact that they’d no longer have the player involved in that player plus cash deal. So there’s a valuation for you, $7.5m!  And TFC turned that down, so they presumably value him at more than that.

TFC have chosen to spin that as $11m all together. I imagine Sunderland would be able to spin that as worth about $6m. And that’s going with the best case scenario for TFC, there’s equally vague and unsubstantiated talk from the Sunderland side of things that it was just a straight swap, no fee involved at all (edit, here’s a local paper putting that in print). Thankfully one of the clubs is from England where they and the media don’t have to care about protecting MLS’ ‘details were not disclosed’ policies so there’s a good chance we’ll eventually get the actual number this time.

I don’t write this to say that TFC got hosed on this. Unless it was a straight swap It’s not an absolutely terrible deal, probably the best they could have got given how desperate they were to sell and have the drama done with, and hey good on them for getting it over with relatively quickly. But let’s not try and spin this as some kind of triumph, a story of TFC taking on the big boys and winning. They didn’t.

Just because TFC and MLS say Altidore’s worth $7.5m doesn’t mean he actually is worth that.