Time for Voyageurs Cup second leg goodness!  Tonight Toronto take on the Fury in the second leg of their VCup semi-final (Montreal and Van play later on this evening) as their quest to threepeat as champions continues.  Last Wednesday they put together a very solid 1-0 win over Ottawa, highlighted by a lovely goal from Jonathan Osorio and some solid defensive work from Clint Irwin and the kids.  Not only did they get a clean sheet win on the road, they got a boost of confidence after a six game winless skid in MLS had put a great deal of doubt into the success of this season.

Tonight TFC have a margin of control going into the match – last year they won the home leg 4-0 after a disastrous 2-1 loss in Ottawa – with the road goal and clean sheet.   However with a 1-0 first leg result, there are a lot of permutations that could see either team advance to the final: 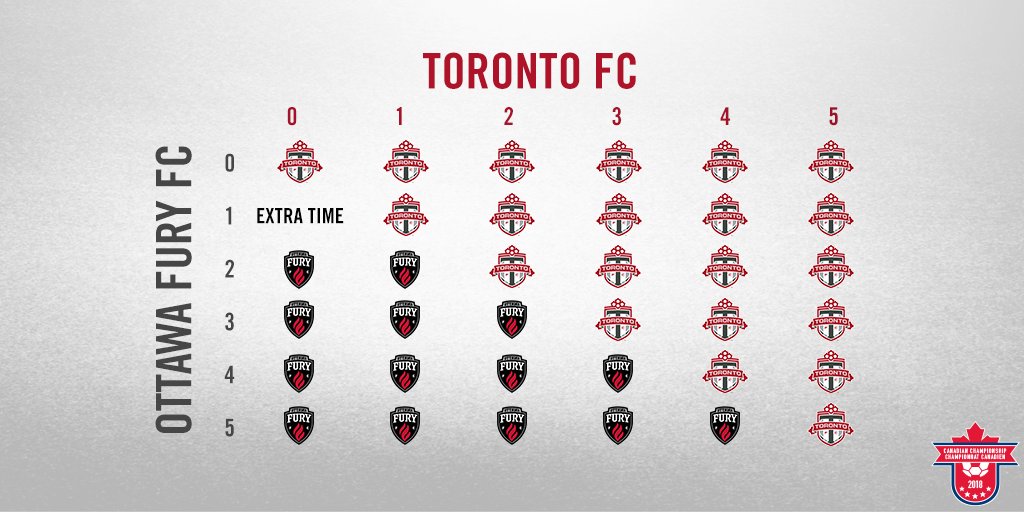 So who’s secretly hoping for a 1-0 to Ottawa result at the end of regulation time?  Just me?  What, it makes the games extra fun!  Come on, you know you want it…

Last week Greg Vanney leaned heavily on young Canadian players (Voyageurs Cup rules state there must be at least three Canadians on the pitch at all times) to fill out his lineup as he rested returning first team starters, but also put his faith in the youngsters to get the job done.  While the final few minutes of the match were a bit ‘oh dear gods no’ for Toronto, they managed to come away with the win.  There were of course other events that marred the game, but they’ve been given too much attention already and won’t be an issue this evening – and that’s all we’ll say about that (if you want to hear a discussion give this week’s episode of The Vocal Minority Podcast a listen.  Yes I just plugged the show, you’ll live).

So what will Vanney do this evening (and this week) in terms of lineup juggling?  With another important – OK, they’re all important – match against the Fire this weekend (didn’t we already live through this week?), does he want to potentially wear out newly returned players?  But if they don’t win to advance to the final, there’s a chance that this season will have been for nought – so what to do?  Will we see new striker Jon Bakero get his first minutes, will Jozy get some time as he works his way back to fitness, and is Chris Mavinga in good enough shape to play two games – or do we see the same lineup we saw last week?

There’s really not much else to say.  Hopefully it’s an enjoyable match with some good end to end play, and the younger players showing why they should be considered for starting (OK bench) roles going forward.  As for the other match – well, assuming that TFC advance, I’m ‘cheering’ for Vancouver as Voyageurs Cup finals against the Whitecaps almost always have some kind of drama, which make them extra fun.  Though I’m never adverse to playing the cheesemakers so really, I’ll be happy either way.  I think I’ll stick with my 3-1 TFC win prediction from this week’s podcast.