Whether you call them “The Baby Reds”; “The Deuce” or the name that all the kidz on the streetz are calling them – “Wunderland AFC” (ok, maybe that’s just me) – TFC II, Toronto FC’s USL affiliate, is starting to take shape. With the inaugural season kicking off less than two weeks from now against Charleston Battery, the organization added eight likely key players to its squad.

The most recognizable names for many are the five products of TFC’s 2015 SuperDraft exploits Clement Simonin, Skylar Thomas, Wesley Charpie, Edwin Rivas and Sal Bernal. Reading between the lines of official TFC propaganda, the club does seem genuinely high on Simonin so he may be the eye to keep on as the first to graduate to the big boy club but there are also signs that Charpie has acquitted himself quite well throughout preseason and beyond. Being a local lad, Skylar Thomas will be given every chance to succeed but may not be quite as ready to face MLS opponents as his defensive colleague Simonin. Barring injury crisis or TFC meltdown, Rivas and Bernal are likely to spend the year in Vaughan. 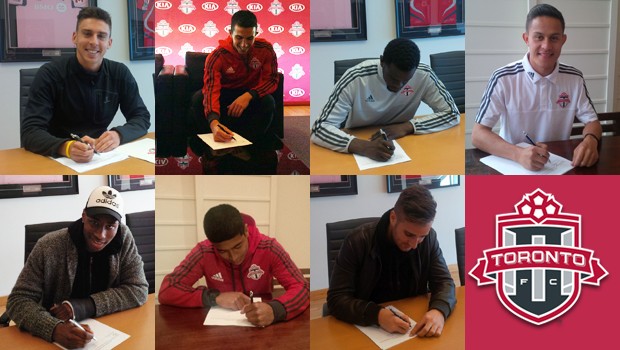 New Kids On The Block

The three remaining names are players who have had some or all of their development based with TFC Academy. While perhaps more in the frame of projects or dark horses, the three players – Molham Babouli, Luca Uccello and Mark-Anthony Kaye – are intriguing in their own right. 22-year-old Babouli is the 2014 League 1 Ontario MVP as well as Golden Boot winner with an impressive 26 goals for TFC Academy last year. If he can transfer those numbers up a level he could be very interesting to track.

Despite a spell with Wilmington last year, Kaye will very likely be playing out at least a full year in USL while at the age of 17, Uccello will need to learn plenty before being considered anywhere near the full TFC. That being said, both players should see their fair share of time in the TFC II starting XI.

With the players officially signed today, players currently with the First Team who will see time at Wunderland (see, it’s fun!) as well as some other talent that will be added in the next couple of weeks, TFC II is turning into an interesting little squad. While following them in any form outside of online or live won’t be particularly easy it may very well be worth your time. Competitively there will be USL squads far more developed than them from the get-go but for the first time, local supporters can get a real feel for the next generation of full TFC senior players. Will every TFC II player graduate from coach Jason Bent’s team? No, not at all but it may be fun to watch a guy like Simonin develop from NCAA prospect to USL standout to TFC depth and hopefully beyond. That’s certainly worth the odd $10 here and there.

Before we leave these new players on the outskirts of Canada’s Wonderland, it’s time for one last piece of analysis that all new members of the Toronto FC extended family deserve… potential nicknames. For your future homemade signage purposes: