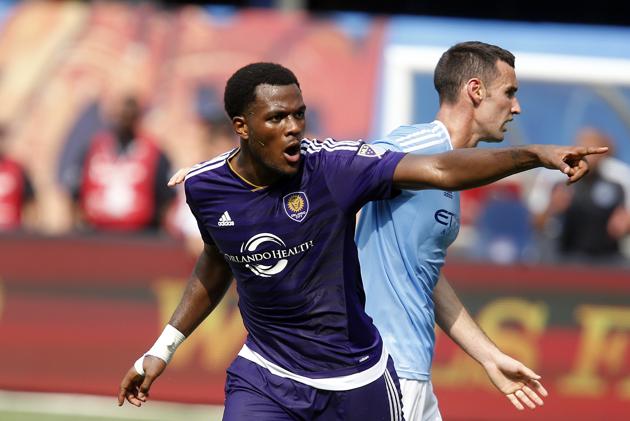 Here’s the player to be excited about from that game.

As always, you can listen to the increasingly odd audio version of this as part of this week’s Vocal  Minority Podcast, out later this week.

Mmmm, Andrea Pirlo made his debut for New York, mmmm, he was majestic out there, a man amongst boys, so smooth, so cultured, clearly man of the match, mmmmmm. That’s all you need to know, mmmmm back to you Kristin.  I kid, but sadly that was the tone taken by many despite there being plenty of players who did better things in what was a very entertaining shitshow of a match on even more of a shitshow of a pitch than usual at Legendary Yankee Stadium. David Villa scored twice, Kwadwo Poku had 3 assists and Cyle Larin got a hat trick and New York City ended up winning 5-3. fantastic stuff, especially the second half, but it was apparently all about Pirlo, who came on after 57 minutes, had a less than unprecedented 77.1% passing percentage and didn’t even get an assist on any of the goals after he came on. But oh my god, he’s there, and he high fived Kaka when he came on and oh my god so many emotions and mamma mia, why aren’t you mangiacakes as excited about this as you should be?

His arrival gave David Villa a chance to shit on his old teammates: “Everything changes, obviously we have a great coach and this is a team that needs to play. We’ve been playing the ball way too long and we haven’t really played the ball right, especially when we get the ball out. Now there will be no more long ball when Pirlo is in the game.”

Pirlo himself said via a translator that it was all very emotional, but he apparently finds the whole MLS experience a bit bizarre: “It’s a new thing for me to see all these people in the locker room and also to be on the pitch and hearing all this music. It’s different, but I’ll get used to it pretty quickly.” Hopefully everyone else gets used to him quickly and the gushing can be kept to when he does something, rather than just show up.

On the other side, Mark Watson was coaching in place of the suspended Adrian Heath and his post game analysis was strong

Again on Sunday, CJ Sapong scored the fastest goal in Philadelphia Union history, 7th fastest in MLS giving Philly the lead over DC after just 20 seconds, after DC had kicked off. They then went up 2-0 within 4 minutes, and then Fabian Espindola absolutely skied a penalty after half an hour. A very bad day for DC, but then cue the comeback, Alvaro Saborio scored on his DC debut, Nick De Leon equalised and Espindola redeemed himself by scoring the winner, heartwarming movie of the week stuff. Sapong capped his record breaking night with the biggest cliche in Union history: “All players know the two-goal lead is pretty much the most dangerous lead in soccer”. He actually said that. Hooray.

Orlando and Philly losing meant Montreal moved up into a playoff spot after an 88th minute goal from Laurent Ciman saw them beat Seattle 1-0, the Sounders 6th defeat in 7 games, though Clint Dempsey will be back next week. Other good news for the Impact is that they tossed some garberbucks at Chicago and have now officially signed Didier Drogba, I’m very intrigued to see how that works out.

Meanwhile Sounders defender Zach Scott is getting scared: “It’s hard to put into words, I’ve never been a part of a Sounders team where everything has kind of gone wrong at one time. …I don’t know what it is, if it’s matter of fatigue, team-wise, or just a lack of focus. Whatever it is, it needs to change. This is quickly turning into a season that had a lot of hope and now it’s one that’s very quickly slipping through our grasp.”

Finally in the East, the tea terrorists took on Chicago and continuing recent tradition, neither team came out of it with a win. Chicago got a debatable penalty, David Accam falling over roughly closeish to Jose Goncalaves, with Goncalves claiming that even Accam said ‘he didn’t touch me’. It ended 2-2 New England equalising lateish after some hilarious defending from Brazilian centre back Adailton who appeared scared of maybe scoring an own goal so rather than attempting a clearance, just allowed a low cross to go by him untouched him on the edge of the 6 yard box, right to Kelyn Rowe who scored, clinching the tea terrorists first point on the road since May 8th.  Sean Johnson was glaring at Adailton after the goal, and Frank Yallop piled on after the game “It’s a huge error at the back so I’m gutted for the guys, Adi’s got to clear it and he just lets it go. He just cost us the game.” In other malfunctioning Brazilian news, The Fire have of course signed Ol’ Gil, no frustration awaits there, oh no. meanwhile Yallop, the clear favourite for this year’s sack race, doesn’t care if you think that, saying: “If people don’t want to have patience because we haven’t been wining games, then so be it.”

Over in the West, the suddenly resurgent RSL took on and took down the Sporks 2-1, a game featuring two fantastic goals by Javier Morales and Benny Feilhaber and Luke Mulholland pulling down Sebastian Jaime’s shorts! An ineffective gesture given Jaime was wearing long bicycle shorts of the exact same colour underneath them.

Steven Gerrard, welcome to Houston in July. He and the galaxy did nothing, despite getting a refreshing blast mid game from the sprinklers, with the Dynamo winning 3-0. Will Bruin got a goal as he tries to keep his place ahead of Cubo Torres, and Lionel Miranda finished it off with a delightful dribble and chip for the 3rd goal.  That’s now 17 away games without a win for the Galaxy, but Bruce Arena brought his best to the post game saying: “Give Houston credit. They played a good game, we did not.” When asked what his strategy for the game was, he said “to win”, and when asked for his strategy after going a goal down early on said: “Try to get a goal back. It’s not rocket science out there” Magnificent.

We’ll end at the top of the table, where FC Dallas got their 5th straight win, stuffing the Timbers 4-1 in Frisky Frisco to continue leading the supporters shield race.

Then there is of course the transfer window, which brings a question- what’s better than one of Ian Wright’s kids?  2 of them! New Jersey have indeed abandoned their former big spending ways and their big splash is to bring in Shawn Wright Phillips, who’s 33 and hasn’t done anything of note in 10 years to play alongside kid brother Bradley. Brilliant.

And that’s you MLS wins and losses for the week.