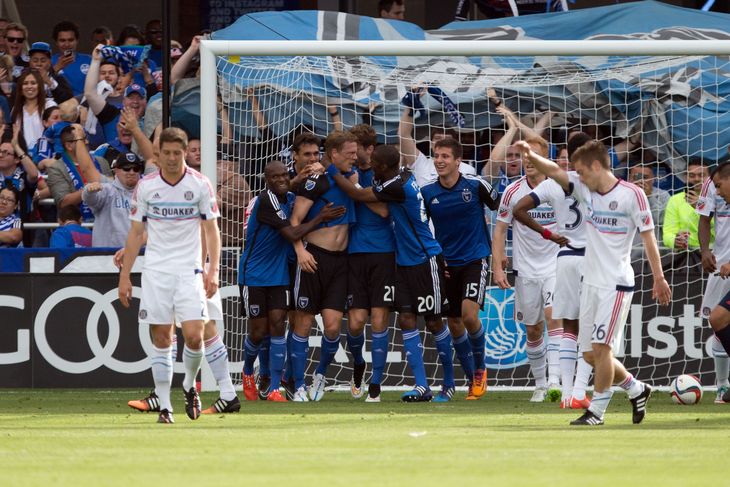 After all this time, it had to be the one game Ty chose to wear a belly shirt that he scored the goal and everyone took his picture. How embarrassing.

As always, you can get this in my fine dulcet Yorkshire-Canadian tones without all this reading and links clicking, with interruptions and digressions instead, you can listen to it in this weeks Vocal Minority Podcast, out later on this week.

Remember last week when goals and entertainment happened and all was good in MLS? Yeah, good times. This week? Well, not so much really, I’m left to rely on nasty tackles and fun quotes to fill this out but anyway let’s get to it.

Biggest winners once again are FC Dallas, for a) actually managing to score some goals, beating Philadelphia 2-0 in a game postponed from Friday night to Saturday afternoon, but sadly still with the awful Friday night Unimas commentators, and b) being the only team left with a 100% record in the entire league. After basically 2 1/2 rounds. yay for parity. It was easy enough for Dallas after Philly had Zach Pfeffer sent off for an elbow to Mauro Diaz. Pfeffer blamed Mauro Diaz for being too short, saying “If it happened to a guy like Blas Perez, I might have hit him in the shoulder.” The best thing about the Union was the banner someone brought of a bundled up Homer Simpson saying ‘lousy Smarch weather’ which I enjoyed.

The other team with a 100% record going in to the week were among the big losers here, DC United, who rather limply lost 2-0 to their arch rivals the New York Red Bulls, Bradley Wright Phillips and Lloyd Sam with the goals. Ben Olsen wasn’t happy. “It was Shit. I don’t know what we think we earned, what gives us the right to step on the field in the first half with that type of mentality. But that will change. I know that.”

Back to winners and this was San Jose’s big weekend, they opened up their new stadium and couldn’t have planned their opponent better, getting league patsies Chicago Fire. They duly went 2-0 up inside 21 minutes, including a first ever MLS goal by everyone’s favourite hard trier, Ty Harden, after 7522 minutes of MLS playing time. They then cruised home for a comfortable enough 2-1 win, everyone’s happy, and they now have 6 points from 3 games.

As for Chicago, they scored a goal, that’s nice, their first of the season, but they’re now dead bottom of the entire league, the only team without a point to their name. That’s because the other two teams going into the weekend with 0 points, and 0 goals, Montreal and New England played each other and came away with a thoroughly predictable and dull 0-0 draw. For the 2nd MLS game in a row Montreal lost a player to a weird injury, Cameron Porter injuring his knee by landing awkwardly after jumping with no-one really around him. Montreal also had Hassoun Camara sent off, which as any good TFC fan knows is an instant game changer and brings inevitable defeat with all blame going to the ref. Or not, here’s our boy Diego Fagundez. “When it was 10 men, I thought we were going to be able to score one, but they just went straight defense and it was kind of hard to get in the box. We were playing around the box and trying to get chances in, but we couldn’t get one in.”  Huh, go down to ten men, concentrate on defence and earn a point. Interesting.

Both teams now have a point, but still no goals, They’re joined in that dubious stat by Colorado who got their 2nd 0-0 of the season against New York City and have now gone 16 games without a win, closing in on the all time record. Not to worry though, those goalscoring woes will be solved by the addition of new DP………Irishman Kevin Doyle. Yeah, that’ll do it.

Two more winless teams played out another 0-0 draw, Portland and the Sporks, and we very nearly got a 4th 0-0 of the weekend until Octavio Rivero scored an injury time winner for Vancouver over Orlando. Probably the biggest talking point there was Kekuta Manneh’s two footed lunge that should have got a red card but the ref showed leniency and only a yellow because, hey, it was on Aurelien Collin, so fair’s fair, everyone’s wanted someone to do that for years now. Bad news for Sam Adekugbe though who had to be substituted and pulled out of the upcoming Canada squad after a collision with Donovan Ricketts left him with severely bruised ribs.

Finally LA and Houston tied 1-1. Robbie Keane scored and managed to avoid rude gestures, instead saving himself for a grumpy post game interview, here’s a selection of his quotes: “We need to get better. We need to get better,” “…when you have a game that’s there for the taking, playing at home, get off to a great start and give a silly goal away — at this level that’s not good enough.” “When we got the goal, we were good for about 10 minutes, and then we stopped playing” “you can see I’m not in a good mood.”  Good times all round this year for Robbie.

With the big news of Minnesota becoming the next expansion side set to happen on Wednesday, that’d be your MLS wins and losses for the week.