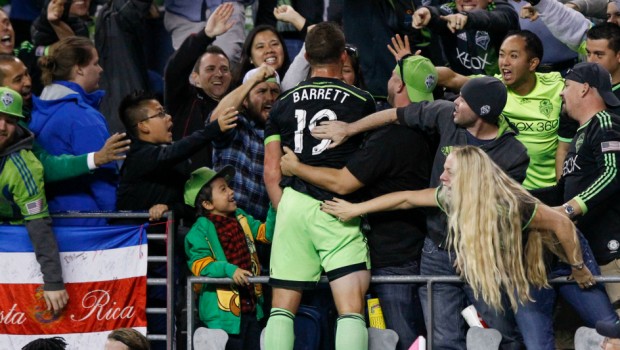 As always, you can hear this as part of the Vocal Minority Podcast when it comes out later this week. Sigi Schmid’s back! and he’s actually talking about food!

A few more teams were eliminated from the playoffs, a few teams clinched a playoff spot this week and overall things are incredibly tight in both conferences, all hail parity.

We’ll start in the East, Philadelphia are of course out after their defeat in Toronto, after losing the US Open Cup and firing Nick Sakiewicz, good week fellas. They Join Chicago on the outside, and they’re practically joined there by New York City, who really needed a win against the currently sadsack DC United. They went 1-0 up in the very first minute via a fat Frank goal, the 3rd time in 5 home games that DC have conceded within 2 minutes. But Fabian Espindola equalised and in injury time Alvaro Saborio got the winner. That left NYC watching the Orlando Montreal game, knowing a Montreal tie would officially end their season, Jason Kreis pronouncing himself ‘obviously shattered.’ DC meanwhile jumped back into 2nd place before Saturday’s game with 48 points, clinching their playoff spot and easing fears of slipping down into 5th or 6th. It was a particularly rainy night, and RFK stadium sprung plenty of leaks, poetically described by an unnamed security guard as: ‘The building is crying tears of joy’.

Late goals taketh away and late goals giveth for City as their hopes stayed mathematically alive with Orlando’s 80th minute winner meaning Montreal stayed on 42 points, Orlando a point back on 41.  A big win on a tough night for Orlando as Rafael Ramos and Tommy Redding headbutted each other and both had to be subbed out within 10 minutes, Ramos with a lot of blood gushing out of his head. One of the subbed in players was Seb Hines, himself playing with a shoulder brace after dislocating his shoulder last week, and he scored the winner, his first goal since August 2012 with The Smog Monsters in England’s championship. So Orlando still have hope but will have to play without Kaka and Brek Shea as both picked up yellow card accumulation suspensions in this one.

The big game in the East was New Jersey vs Columbus, and the Red Bulls came out on top there 2-1 to move 3 points clear at the top the East, and that held up as New England managed to lose 3-1 to Chicago, with Harry Shipp finally being played in an advanced role and Ol’ Gil getting another goal. That comes a week after they only tied Philly 1-1. There’s definitely something to be said for TFC’s ability to beat the teams below them.  So 2nd and 5th separated by just 2 points, with 6th and 7th just one point apart, should be an interesting end to the season in the East.

Over in the West, Colorado are now done, they lost 2-1 to Real Salt Lake thanks to 2 excellent goals from Joao plata and Luke Mulholland and are officially eliminated, though the loss was narrow enough to clinch the Rocky Mountain Cup.  Pablo Mastroeni tries and fails to be happy about that. “I’m happy we won the cup. How we won it was disappointing. I’m happy for the fans, but the way we did it leaves a void. Especially after the way we started.”

RSL are just about hanging on to a 4 way race for the final spot in the West on 41 points, joined on that total by Houston, who got hammered 4-1 by FC Dallas. Owen Coyle isn’t feeling good about his team’s chances: “It is what is. It’s horrible, it’s not a nice feeling. But we’ll pick ourselves up and go again.”

As for Dallas, the win takes them to 50 points and officially clinches their spot though they could easily fall down to 4th of 5th, Oscar Pareja saying: “There is nothing but happiness. But as well at the same time, there is a big responsibility for what is coming in front of us.”

What’s coming in front of them is 2 games against Vancouver starting this Wednesday, which could end up being a lot of fun, two of the best young speedy counter attacking teams in the league, that really didn’t like each other at the end of last year.  The Whitecaps are stumbling a bit and gave up a very soft equaliser to San Jose this week, allowing Chris Wondolowski to celebrate by finding his daughter in the front row and kissing her. aaaawww. The caps then muffed a glorious 2 on 0 breakaway in injury time that would have clinched their playoff spot. They’re now 3rd with 49 points, just one behind Dallas.

That tie enabled San Jose to finally climb into the playoff spots in 6th place, tied on points with, but ahead of Portland who crushed the Sporks but still managed to lose 1-0, Nat Borchers called it cruel, Caleb Porter said devastating, but a lack of goals has been killing the Timbers all year, they now have a huge game against RSL next Wednesday to try get it right.

For the Sporks it capped off a great week that also saw them beat Philly in a penalty shoot out in the US Open Cup final. Kristan Nemeth scored the goal on a mazy dribble that started in his own half and ended with a very tidy finish just inside the far post. Peter Vermes summed it up nicely: “I say this with all due respect. He picked those guys apart, and the finish was fantastic. That was a fantastic finish.”

Talking of fantastic finishes, MLS saved the best for last, Seattle vs LA in front of 56,097, though sadly on a freshly painted NFL pitch. Not a great game, but the Galaxy were winning after Robbie Keane scored via a terrible backpass from Zach Scott, but cometh the hour, cometh the man. Nelson Valdez was supposed to play but injured himself pre game so Sigi Schmid, fresh after being inducted into the US Soccer hall of fame, had to think quick. “The change was to put in Neagle and then bring Barrett away from his hot dog and sodas and bring him down to the locker room. It’s a good thing we did because he ended up getting a good goal.” Yes, brought in as a late sub, the fox in the box did his thing and kneed home a corner from a couple of yards out before running and jumping into the crowd to celebrate. Heartwarming stuff all round.

Bruce Arena’s heart remains unwarmed. His side clinched a playoff spot and when asked about that by reporters in Seattle, he said: “Oh, well, I think we’re going to have a parade in downtown L.A. tomorrow. We’re a team that expects to be in the playoffs, to be honest with you. We certainly want to accomplish a little bit more than being in the playoffs.”

While we’re talking playoffs, congratulations to the Ottawa Fury who clinched are still going strong in the NASL and clinched their playoff spot over the weekend.