Home » Analysis & Opinion » Forget the results, look at the vision!

Forget the results, look at the vision! 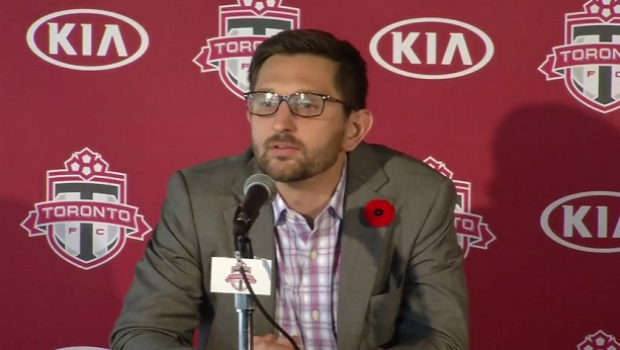 You wouldn’t believe everything that went on behind the scenes to make this beard happen!

As we all know, yesterday was when Toronto FC outlined it’s ‘vision’ to select media. As a non invitee, I had no choice but to first make fun, (this is practically the Vocal Minority’s hippocratic oath: – ‘First, make fun.’) then sit and wait for the tweets and articles from the poor mopes who’d had to go all the way out to Downsview to hear it.  Most of them chose to barely address it, with just vague tweets with varying enthusiasm of an impressive presentation and articles that politely ignored it before getting into the juicy post presentation questions side of it all. Defoe’s still part of the plan don’t you know!

So we didn’t really know what the presentation was really about, but then thank Fagundez for those media types who aren’t beat reporters and thus don’t have to think about jeopardising their relationships, or how awkward it might be the next time they go to TFC looking for quotes and can properly focus on the ‘vision’ part of the morning. Enter Cathal kelly, with a very entertaining read, go there now if you haven’t already.

Plenty of TFC supporters don’t like Kelly, due to past articles he’s written. He likes to stir things up every now and then, he seems to enjoy some cosy relationships that appear to affect his coverage of certain people at certain times, and he can certainly exaggerate and embellish for the sake of his stories, but I’ve always found him a very entertaining writer. On this occasion his bias and derision are pointed very much in the same direction mine would be so I thoroughly enjoyed it, and hey, at least he provided some details of what the whole thing was about.

Basically, we’ve seen this act before, whether it was when they got prozone back in 2008, or when they built the new training ground and proudly showed it off (and continue to show it off) to pretty much anyone who’d come and take a tour, or when they brought in Jurgen Klinsmann to tell them what to do, or when they went all in on Aron Winter and co, developing a philosophy to go all the way down to the youngest kids levels, and so on and so forth, through all the different regimes we’ve had.

They’re practically screaming ‘stop focusing on the results, look at our processes, aren’t we impressive? Stop being mean, we’re trying really hard, and investing lots of money and we’re doing things the right way! Everyone talks about analytics now, well look at our analytics, just look at it! Please focus on all this stuff, not the constant losing at the end of it all!’

To introduce a modicum of fairness to the article, the facilities and all this science do seem kind of impressive, and I genuinely think TFC’s academy will be a very helpful place for kids to go to and develop. These are all good things when it comes to player development, which is what the academy should be all about.

Sadly when you get to first team level, development and the process and facilities don’t matter at all, other than what they can contribute to winning. It’s all about results, and that’s the bit that TFC and MLSE just don’t seem to get at all.  Writing this brings to mind in 2010 when Paul Beirne mentioned to me at a townhall meeting that Preki (you know, the only coach they’ve ever hired with a winning record, and one who had made a decent start at building a team that could be competitive.) was fired in part because ‘he didn’t fit in with how we work here’. Yes, because ‘how you work here’ had been going so well. It all further cements a theory I already had.

When Ryan Nelsen was fired, and Greg Vanney introduced as his replacement, we were all given what sounds like the coles notes version of this presentation, and clearly Bezbatchenko and Vanney are big believers in all this and are on the same page with it.  I think it’s fair to say that Ryan Nelsen probably wasn’t as invested in it, and it’s very obvious that Tim Leiweke, great salesman that he is, is not a details guy. It’s no co-incidence that as soon as Leiweke announced his departure, and before anyone could be brought in above him who might disagree, Bezbatchenko initiated a public spat with Nelsen and quickly fired him. It’s also no co-incidence that Greg Vanney was happily in place and ready to step in and take the job and bring all the analytic stuff they talked about to the forefront.

Bezbatchenko tried to say that it was about the results, and I think in a way it was, but not the way he’d want you to believe. Nelsen’s team was in a playoff spot, had a fairly favourable schedule coming up and given the previous results they’d been able to get against the poorer teams in the league, would probably have limped their way into a playoff spot. And this being TFC and the playoffs the holiest and most unattainable of holy grails, that would have made him unfireable. Bezbatchenko would have been stuck with him and that would have got in the way of all this stuff that he and Vanney so believe in. Once again results sacrificed for the sake of the process.

Hopefully they’re right and that late season collapse was just a temporary step back on the way to better things, success that would be repeatable and long term because it’s based on a lot of solid behind the scenes work that will continue working, rather than merely a big chequebook bringing in impact players. There’s certainly a chance that it is, the last ten games of last season would be a very harsh thing to base any ultimate judgement on, but I doubt it. Rather I think TFC will continue ultimately failing, but just look at how impressive their facilities and processes are, concentrate on all that instead.  Right until they get fired and the new regime will point to all the things that were wrong with this approach and how this time, their new ideas, new processes and new priorities will get it right. This sentence from Kelly’s article, from the moment that reporters got to ask questions, sums it up nicely.

The first question boiled down to, ‘How confident are you that, if you’re fired tomorrow, any of this will outlast you?’ “We don’t know,” Bezbatchenko said brightly.