Home » Match Previews & Reports » Toronto FC vs Portland Timbers: If TFC Falls In Portland, Does It Make A Difference?

Toronto FC vs Portland Timbers: If TFC Falls In Portland, Does It Make A Difference?

Posted By Kristin Knowles on May 1, 2016 in Match Previews & Reports, Uncategorized | 0 comments 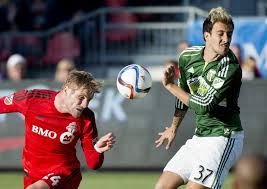 Not my face, my beautiful face!

To paraphrase REM: ‘It’s the end of the road as we know it, and TFC feels fine…’  Perhaps a bit of an overstatement, but that’s been the prevailing message from the team – things are good, they’re pleased with Toronto’s performance during this seemingly endless road trip and their focus on the defense has paid off.  So really, what’s to stress about for this last game before a very welcome return home to BMO Field next weekend?  EVERYTHING!  No, I’m just kidding – but every game brings something to worry about, regardless of how in form your team is at any given moment.

Toronto is on a two game winning streak, two clean sheets and as mentioned, putting together some nice defensive performances all at the same time.  And for the last few weeks we’ve expected them to have that game where it all falls apart – and honestly this could be that game.  TFC have never won at Providence Park, Diego Valeri (who’s been far too quiet so far this year) is nice and fresh having been suspended for their mid-week game, Fanendo Adi is on a scoring tear – did I mention that Darlington Nagbe is back from injury?  Sigh…Oh and they play on turf.  Whee!

Toronto have some absences due to both injury and loans to TFC 2 – most notably would be the ongoing loss of Benoit Cheyrou, and the recently injured Jonathan Osorio. At the moment not having Oso is the bigger issue for TFC, especially after it appeared he was returning to form last weekend against the Impact. His contribution to the attack and work in the first look at the diamond midfield was noticeable and gives hope that perhaps this will help him find his feet (and maybe his scoring boots).  Either way his injury means it’s likely that we’ll see Dan Lovitz start in his place – although Jay Chapman has also traveled with the team and is looking to get more than late game sub minutes under his belt.

However the big storylines for this game are as such:

So can TFC pull it off?  The Timbers are playing a bit tired after a mid-week game away, Portland have only won once in their past seven games, they’ve not had their top lineup available for some time (although that may change today) and even with the loss of Osorio, Toronto have close to their top starting XI for this game.  The Reds will want to carry the momentum of recent games into next weekend for the home opener, and as there are always questions about whether TFC can turn their solid road game abilities to excellent home games.  However none of that matters today – it’s all about keeping Valeri, Adi and Nagbe silent – as well as Timber Joey!

TFC could win today – they probably won’t, but then again I said that last week.  The Timbers (on paper) are a pretty good team.  They’re also the reigning MLS Champions which should count for something; except this year they’ve looked (and been) very beatable.  I still think a solid draw is within expectations and I’m sticking with my 1-1 prediction from the podcast.