Who’s Your Derby?: “The New Soft” and TFC’s Rivalry Matches 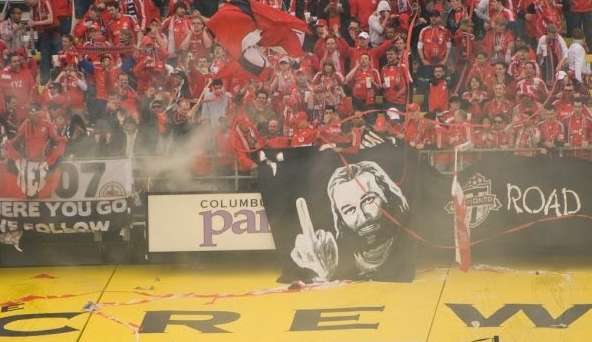 “No one likes us….something, something”

When you are the lone club in a province that is geographically larger than all of England, the idea of a local football derby becomes slightly amusing. But such is life for the North American supporter where – except for a few cases – the idea of “The Away Day” as perfected in Europe, is more akin to a long weekend mini-break. Residing in one of MLS’ most polar outreaches, this is especially true for the Toronto supporter.

When The Reds joined the league in the 2007 season there was no natural rival for the club. Lacking that obvious historical, geographical or competitive foe, the league – as per MLS marketing laws – decided to designate Columbus Crew as our automatic nemesis. With this new “derby”, a term that is used widely to this day to describe this fixture, came a faux trophy, (a “fauxphy” to its friends) called The Trillium Cup. Because after all, what stokes the fires of cross-border “ooooltras” and professional athletes like a shared official flower? Grrr! Floral arrangements!

MLS already had a number of fauxphies in place but the expectancy that Torontonians should suddenly despise a mid-Ohio town most had only flown over was absurd. But there it was again – the word “derby”. The enforcement of this branding in 2007 lead me to only refer to this fixture as “The New Soft” – the complete opposite of what is arguably football’s most fiery derby, Glasgow’s “The Old Firm”. The initial hilarity of this manufactured event was mostly cringeworthy but as the years have passed – not unlike the mighty trillium flower itself – things have grown. However, they grew organically.

It is that very organic nature what MLS marketing gurus and those aiming to re-create international flair in this league forgot. The world’s greatest derbies – even the world’s not so great ones – weren’t thought up on paper, they germinated outwards from the terraces. If a created derby falls in a forest (not Derby falling to Forest #NeverForgetBrianClough) and no fans care – is it still a derby? That was Toronto v Columbus until events put things into motion and the fans decided to say different.

The genesis of any emotion being attached to this fixture was undoubtedly the 3,000 or so travelling Toronto supporters who invaded the Ohio State Fairgrounds back in 2008. There was a convoy of buses, beers were chugged, bagels were thrown, churches were piddled upon and bros got tased. Everything you want in a good away day. Except a win of course. Columbus fans were not too thrilled with the display at their ground (except their win of course) but seemed to have absorbed the blow only to come back stronger.

While Crew itself were holding a lopsided advantage on the pitch, the tete-a-tete between supporters began to fester and has now become a nice little hate-on. Columbus support, and recently the club itself, have undergone quite the evolution which generally adds a testy feel to these days on the schedule. However, apart from the sponsored fauxphy, (which always makes me embarrassed when an international player is forced to lift it in “victory”), is there anything beyond some website graphics that qualifies this as a derby over a simple rivalry in the truest sense? 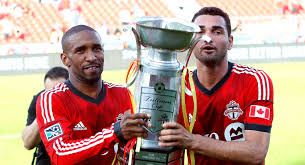 With this in mind, we want to hear from you the TFC supporter or even casual observer: Picking one – what is the true TFC derby? Is it indeed “The Trillium” aka “The New Soft” or one of the following?

Okay, for me and many this is the one and only Toronto FC derby. Call it “The 401 Derby” – call it what you want. In North American terms, this fixture has all the ingredients and more to qualify. Based of course on a couple of centuries of wild and crazy times, Toronto vs. Montreal is steeped in the English vs. French kerfuffle. On top of history, this rivalry bubbles with social tensions, political grumblings and the Pepsi vs. Coke debate.

There is an actual palpable dislike in each of these opponents’ grounds when the other visits. You can feel the nasty. The fire is stoked by the proximity and ease of travel between the two cities, the cooperation of the two clubs to house large away support and perhaps most importantly by the competitive matches the two clubs contest which tends to fly in the face of which side is in form. MLS conference fixtures plus Voyageurs Cup dates on top, cement this for me as TFC’s true derby. And no, this is not about the Leafs and the Habs – not everything in Canada is about hockey – this is only about two sets of football fans with little respect and no time for each other whatsoever.

It’s such a shame about Northern Ontario, Manitoba, Saskatchewan, Alberta and Eastern BC. You guys are really getting in the way of a good potential derby. Sadly, distance (despite some TFC fans great efforts last weekend) will always eliminate this matchup from being able to hold the name “derby” in my eyes. It’s mockingly referred to as “The Great Canadian Bagel” for a reason – great on both sides – nothing going on in the middle.

It’s too bad really – the matches between these two clubs are usually exciting affairs and often full of piss and vinegar. Whether in MLS or the Voyageurs Cup, TFC vs. Whitecaps has had its share of great dramas. The rivalry has one great derby ingredient in the Canadian regionalism angle (without the sometimes ugly language thing – even if Vancouverites pronounce “pants” as “pawnts”) which sparks quite the battle of egos. Two cities that think so highly of themselves that not even The Economist can decide which the best city to live in is. Fun – but not quite enough. TFC vs. Caps is always a fixture I look forward to… too bad about that flight.

Maybe you have a different rival that you feel is – personally at least – the TFC derby day to outderby all derbies. I always thought that Chicago made more sense than Columbus. MLS’ two Great Lakes clubs battling for Copa de los Grandos Lagos and the reward of superiority over the waves! We are almost the same size and type of metropolis and we both love pizza and sausage. No worse reasons than a flower.
New England? Nope. Despite us representing Olde England in the league there isn’t much else to go on. Yes Mark Wahlberg is fond of shooting movies here but that’s about it.

New York(s)? As TV gangsters say “forget about that”. Toronto may be “New York run by the Swiss” but New York is “New York run by New Yorkers” and that’s way cooler. They don’t care about us any further than what happens on the pitch. Plus, they now have each other to actually have a real olde tyme derby.

D.C. United? Apart from being the respective capital cities of our two nations (I saw it on CNN – it must be true) there is nothing to go on. They’re into eagles we like a bit of hawk on the side. End of.

Perhaps you have another choice… perhaps you don’t really think there is a true Toronto FC derby at all. Vote in the poll below and share your opinion in the comments section as well. Or have us bring 3,000 of our closest friends over to your house to make a giant mess. It’s your choice!