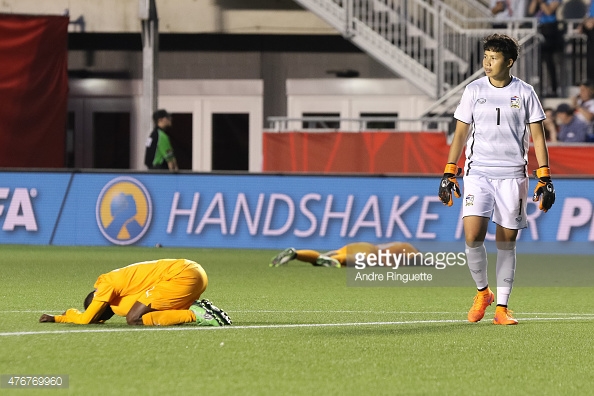 Cote d’Ivoire. A team that deserves your sympathy.

Thursday’s action started with Germany and Norway, I didn’t see much of it, but the result is definitely a surprise, 1-1, good for Norway and a very nice equaliser direct from a free kick. The Germans picked up another injury to a midfielder that they’ll be hoping isn’t serious, but will still have enough to beat Thailand and the goal difference advantage they have should hold up. Norway have now got to be kicking themselves a bit for not running up the score as much as they could against Thailand. The real losers though are probably Cote d’Ivoire as Norway might fancy their chances of challenging the German goal difference advantage and really go at the Elephants in the 3rd game.

Netherlands and China was next, and the first half was all China. They got a few shots off from distance, forced a few saves, though generally easy ones, Holland did bugger all, I’m puzzled as to why so many were tipping them as a dangerous dark horse kind of team?  Awful so far.  Then I switched to the Canada/Dominica game.

That was OK I guess, had the control of the game you’d expect, but that old Canadian lack of ruthlessness is still very much there. Cyle Larin scored a nice goal, that’s good, Tiebert got a penalty and then Milan Borjan had to handle outside the box and got himself sent off. Fun. Ah well, 2-0 could definitely be worse, should be comfortable enough next week for one last time at the National Soccer Stadium.

While I was distracted with that, China continued to batter Holland but had to wait until injury time to squeak a 1-0 win with their 26th shot, so now both sides have 3 points. Good or bad for Canada? Netherlands will be going for the win = not good, but at the same time should leave them more open defensively = good? We shall see.

Meanwhile back to group B and the battle of the Elephants was, as predicted a bit of a classic, entertainment wise if not in quality. Thailand up 3-1, then CIV come back to 3-2, then hit the bar in injury time (2 bars and a post in the whole game) and eventually couldn’t quite equalise. Here’s the highlights.

Tournament over for the elephants, and the rest of Group B seems fairly predictable, Germany will win, Norway will come 2nd, Thailand will be 3rd with 3 points and a terrible goal difference, and that might well be enough to get one of the top 4 3rd place finishes.

The it was Canada’s turn, I’ll write more about that elsewhere, but it finished 0-0 and Canada didn’t look good.  But, they have 4 points and a guaranteed top 3 finish, and pretty much all but guaranteed to be one of the top 4 3rd place finishers, so qualification is almost assured with one game left and they know a win will be good enough to get 1st overall. You can’t complain too much about that situation.  Behind them, China and the Netherlands both have 3 points and New Zealand have 1, so it’s very much all to play for for all the teams on Monday, should be fun.

Group C goes on Friday with what should be two predictable results. Cameroon beat Ecuador 6-0 in their first game, Gaelle Enganamouit with a hattrick, but they still shouldn’t be considered a good match for Japan who are very much favourites to win the group. That they only won their first game 1-0 reflects well on Switzerland, and suggest they’ll have way too much for Ecuador to handle. These two games may well be all about the goal difference, the Swiss looking to pile the goals on and Cameroon hoping to limit the damage as they both should have 3 points heading into the last game and whoever’s ahead on goal difference will be able to guarantee second place with merely a tie in the 3rd game.

D for death, and after the first day, that looks about right. Nigeria and Sweden played to a very entertaining 3-3 tie, Nigeria answering very affirmatively questions about whether their 2nd place finish in last year’s u20 world cup means anything as they looked dangerous in attack, if not all that organised in defence, expect more goals in their games. The other  game saw the US team look less than convincing against a very game Australia side that outplayed their more prestigious opponents without being able to build a lead from it before tiring and letting the States eventually overwhelm them.

Friday sees the Aussies take on Nigeria first of all and both sides need a win if they don’t want to all but kill off their chances of advancing. After that, the highest profile game of the tournament so far when the US take on Sweden.  Obviously Hope Solo is dominating the off pitch storylines but Abby Wambach is perhaps the biggest problem for the US as their game seems to be designed still to revolve around her, but she’s not quite good enough to warrant that any more. Will Jill Ellis make the tough decisions that some are calling for and limit Wambach’s role, maybe even drop her to the bench? Personally I hope not, I hope they tie themselves to the good ship Abby and it all goes horribly wrong, that would satisfy me immensely.

Australia exposed the US defence repeatedly, especially on the break and Sweden definitely have the added quality to make them pay if they get similar opportunities. On the other hand, there were large holes in the middle of Sweden’s defence that Nigeria repeatedly exploited with through balls and well timed runs. Given Sweden needs a result here so will have to take chances and commit players forward there might well be similar opportunities presented and you’ve got to think the likes of Lauren Holiday will be able to slip balls through for Sydney Leroux or Alex Morgan if and when she plays coming back from injury to run on to and that probably won’t lead to good things for the Swedes. But who knows, maybe the states will still be focused on ‘get it down the wings and put in a cross for Abby’. We can but hope.

It’s a very Western day so things don’t kick off until 5 eastern with Australia vs Nigeria from Winnipeg. Switzerland vs Ecuador starts at 7, then that overlaps with USA vs Sweden starting at 8 before we end with Japan vs Cameroon at 10.