You wanna put what, where? Rationale and the Argos at BMO Field

Home » Analysis & Opinion » You wanna put what, where? Rationale and the Argos at BMO Field 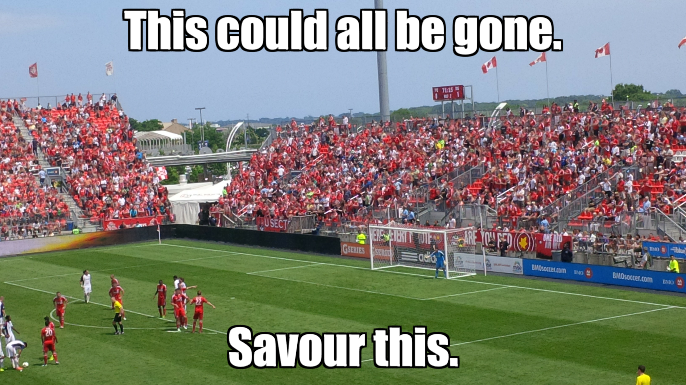 So they removed the President of Toronto FC and during the brief press conference it was revealed that MLSE is “kinda” still looking at shoehorning the Argos into the ground.

I’m sure the cost of the retrofit doesn’t remotely equal the money they’d make from a rental. And where is this money coming from?  And the much revered (well, it used to be) South End… it will get displaced where exactly?

As much as I think Tim Leiweke is doing a good job (sacking Payne is a start), I’d like to break down and challenge some of his statements.

I’m going to go out Sunday and meet with the season seat holders. We’re going to stand front and centre and look them in the eye and communicate here – good, bad and indifferent. We deserve it. What we’ll tell them on football is that we did football at (the Stub Hub Center) in L.A. with different games including the high school championships and a whole series of games there.

To me, it’s not a debate about do you do football or not. It’s a debate about if it’s the CFL can you design the stadium so that it grows for the CFL and shrinks back down to its current intimacy for soccer. That’s money, and it requires cash and we’re trying to figure out what that means.

Oh, a retractable stand then?  Now it’s hard to find numbers on retractable stands.  The latest example was that of the Olympic Stadium where West Ham will take up shop in three year’s time.  The retrofit calls for the demolition and reconstruction of all four sides of the ground’s bottom two tiers.  The cost is a staggering £120-150 million.  Granted, we’re talking about a fraction of the work, but even a fraction is still not going to be cheap.  Hypothetically, are the Argos worth $10-20 million (speculating, but it cannot be cheap) for one stand to move 30-50 feet?  And that doesn’t include a roof.

Whether or not we can do that, it means we have to spend more money… We do other events there, including rugby which is just as tough on a pitch as football if not more so.

Comparing rugby to pointyball is a bit of apples to oranges.  Yes, rugby is as tough on the pitch as pointyball, but:

If anyone has any doubt that this is a terrible experience, try to watch a soccer game at a field with football lines.  I had the pleasure of supporting the Hamilton Cup of Soccer back in the day, a one-off week long tournament played at Ivor Wynne Stadium, home of the Tiger Cats.  Though it was great seeing these teams play in person, watching seasoned pros unsure of where out-of-bounds is, takes away from the spectacle of the sport.  The game is tainted because the participants are confused due to the markings on the ground.  The gridiron lines took away from the damn game.

If BMO Field wants more dates at their ground, bring in a NWSL side, a USL-Pro side and market both to season ticket holders at a discount and make your money at concessions with cheap beer and food.  Let the supporters light flares and go nuts. Make the lesser clubs more accessible for customers and then beat them over the head with TFC advertisements all game long.  Friday night footie?  Sure, I’ll stick around for that.  A true community spirit.  One stop mecca of local football.When this franchise came about in 2006, a conscious decision was made : to put my money where my mouth and heart is, and stump up for tickets as soon as they were available.  Day 1.  Purchasing a pair in the dead center of 113.  If someone, anyone, was going to make that kind of investment in a serious (not you Toronto Lynx, and not anyone in the then-CPSL) professional soccer team in this area, then it was my duty as a supporter to back them up.  In return, a beautiful soccer-specific ground was built for this club.  Traveling every day on the GO Train, passing it, muttering “home” and then smiling as we passed by.  Even though the operating club is dysfunctional, it still appears to be footie, and that will suffice.If MLSE shits all over this dream for the sake of 9 more dates for the wrong damn sport that the stadium was built for, well then, my hatred for this organization will officially never die, I will surrender my seats, and begin researching the process into what it takes to have a ‘fan owned’ club in the NASL.Come V-Cup, we’ll show you what a real derby looks like.