Aw Man, Why Always Us? – Jozy Altidore Out 4-5 Weeks With Hamstring Strain

Posted By Kristin Knowles on May 19, 2015 in News, Uncategorized | 6 comments 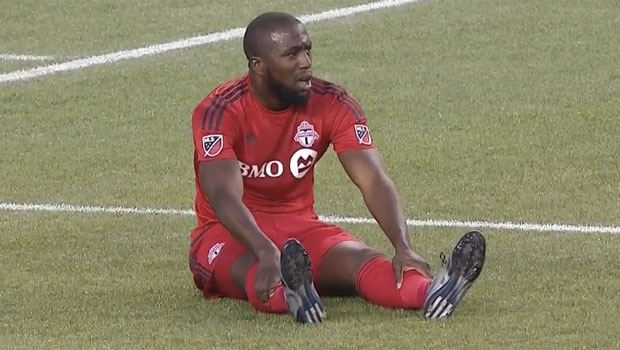 Well this couldn’t happen at a worse time.  We all know that Jozy was injured in the game on Saturday night in Foxborough.  Everyone groaned as the curse of playing the New England Revolution seemed to have struck again as Jozy signalled to be pulled off, pointing to his hamstring. However as much as I’d love to blame the carpet at Gillette Stadium for his injury, this isn’t 2012 and this isn’t Danny Koevermans; this is sadly just a hamstring injury and now Toronto FC are without one of their best players.

He’s out 4-5 weeks – not too difficult to stretch that out to 6 or 7 weeks and then we’re running smack up against the Gold Cup and his expected call up to the US Men’s National Team.  We’d already expected him to be gone for the Gold Cup and while it’s never ideal to lose players to international tournaments, in the end you want that for your team – to have the quality that gets called up for their country.  Jozy is always in Jurgen Klinsmann’s plans and both he and Michael Bradley have long been tapped for this. But – and yes this is worst scenario thinking – if he’s just healthy enough to join the US team and re-aggravates the injury then we’re looking at months without one of our best players. Awesome.

Replacing not only his production, but his presence and the effect he has on opposition defences will not be easy. He’s scored six goals so far, assisted on one and in the last couple of games been very involved up top causing a nice bit of havoc.  The big question is then of course who replaces him?  Bright Dike is not available to be recalled from San Antonio until mid-July so Luke Moore, Robbie Findley and Jordan Hamilton come on down.

Not exactly the most exciting list of prospective replacements is it?  Robbie Findley’s been mostly terrible/invisible out on the wing, Luke Moore has just been completely terrible (and invisible) and Jordan Hamillton might as well be invisible given how little time he’s been given.  After Saturday’s performance you have to hope that Vanney will leave Moore on the bench and give Findley a try up top. This is his preferred spot and who knows, maybe this will work. They went out and snatched him up for a reason, right? As for Hamilton, I truly hope this sees him get some minutes – he’s a talented player and should be one of the future stars of this team.

Really the only other concern with any of these players is that they are not the same type of hold up, physical players as is Altidore – Luke Moore notwithstanding that is.  Bringing up Dike will have no effect because he’s not available until mid-July and really he’s an unknown quantity

It is not an optimal situation and will be a stern test for TFC. Everyone will be looking to Vanney to not only set strong lineups but to make sure that his attacking options are working well with both Giovinco and Bradley. It’s going to get a bit bumpy folks; batten those hatches and hopefully we can ride out this storm.