Home » Analysis & Opinion » BMO Field Expansion: Renovations Will Go Down To The Wire & Argos Talk Is Being Kept Quiet

BMO Field Expansion: Renovations Will Go Down To The Wire & Argos Talk Is Being Kept Quiet 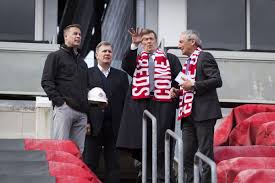 “And that’s where you should put the end-zone!”

New seats, fancy suites, cost overruns, delays and quiet talk about the Argos – those were the topics of the day on Friday when current Toronto mayor John Tory was given a tour of BMO Field along with (still) MLSE CEO Tim Leiweke and Bob Hunter in attendance to say all the right things.   Both the mayor (who is trying to show how tech savvy he is) and Toronto FC employed the latest app Periscope to stream parts of the tour live.   Sadly I have none of those for you to view but take a look at the latest video from TFC to get a vague idea as to what’s happening:

Aren’t you excited now?  Come on, not even a little?  All those luxury suites under construction doesn’t get you hyped?  But the shots of the seats in the rain, that had to have an effect, right?  Doesn’t it make you nostalgic for just about every game we’ve ever watched at BMO?  Thank goodness we’re going to have a canopy, right? But not til next year.  Which will keep out all of the elements; when they fall straight.  Which as Bob Hunter put it, “Unfortunately the rain doesn’t fall straight in Toronto”.  Funny how we’ve never noticed that over the past eight years.  Nor does the wind gusting in off the lake but hey, a canopy!

There are lots of pieces (this one by Neil Davidson is a good resource) available giving a more thorough breakdown of the tour from people that were actually there – VMP isn’t quite high enough the media order of importance to rate first day invites; but we may get an invite later on this month so stay tuned!  Anyway, there were a couple of things that really stood out for me from the parts I was able to watch on the interwebs during the tour.

Running Behind:  They are so behind that the tour didn’t get to tour the primary reason for this little gathering; the new East Stand.  Instead they had 350 workers on site frantically (I presume) putting in more seats and other structural pieces while Tory, Leiweke and Co. looked at where some of the new suites will be as well as a photo op in the gusting wind pitchside.  And then TL let the assembled folk and press know that they are running so far behind that they don’t expect to be finished with this phase of the renovation until May 10 (May 1 being the original completion date).  What’s that you say?  But isn’t that the date of the home opener?  Why yes, that is the date of the home opener.  I’m half expecting a letter asking fans to bring dusting cloths or for the pre-game handout to be commemorative Swiffers for the first 30,000 fans.  It is so typical TFC though so I guess we really shouldn’t be surprised.  But somewhere in the back of my brain is this tiny fear that the game will be moved to a different date because of this.  Surely that would never happen, right?

Over Budget:  Shocking no one is that the renovation is running 10-20 million dollars over budget.  Leiweke tried his best to make a joke of it – ‘yes, we’re over budget, no I’m not telling you how much’ – but then to spin it as a positive that the owners (MLSE) are willing to do what it takes to make BMO a first class stadium.  John Tory – “This is principally being done to make this a first class facility for TFC….”

Argos:  Of course this was brought up; with both Leiweke and Tory in attendance this was going to be mentioned.  However both glossed it over with Leiweke (and later on Bob Hunter) saying that the deal was far from done, that it was good that the conversation was being kept “quiet” and that after the Raptors, Toronto FC is the top priority of MLSE at this moment.  Both TL and Hunter threw out the idea that the window of opportunity for the Argos is shrinking and that a deal needs to be done within the next month if things are to happen during Phase 2 for the Argos to be at BMO next season.  Check out Duane Rollins’ take over at CSN for some additional details.

For me really – other than Argos talk – what stuck out is of course all the chatter about the new suites being the focus of most of the talks when discussing the renos and really that delay.  Who wants to go down to BMO early on May 10 and watch them frantically running about trying to finish things before they have to let us in?  It’ll be interesting to see if they manage to fill all 30,000 for the opener and give credence to all of the time and money they’re putting out into the media (and construction of course) trying to convince everyone that this expansion was needed.