Bye Bye Bekker: Kyle Is Off To FC Dallas

Posted By Kristin Knowles on Jan 21, 2015 in News, Uncategorized | 5 comments 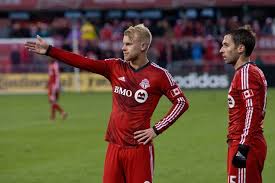 Mr. Hinkley told me I’d like Dallas. And then gave me some SPF 100

Bye Bye Bekker – looks like Kyle Bekker is heading off to FC Dallas in return for everyone’s favourite, allocation money.  Word broke on twitter from multiple places last night that the Canadian midfielder was heading off to the toasty environs of Frisco, Texas.  They’re going to have to dip him in sunscreen during summer games – a more combustible player we’ve not seen since the departure of Ecks.  For me personally I’m not sad to see him go – I don’t wish him ill but it’s pretty clear that regardless of skill set that Toronto is not the place for him.

Bekker was of course the prize draft pick for TFC in the 2013 SuperDraft (so super); going third overall and highly touted by then Toronto GM & President Kevin Payne, as the prize they wanted.  Bekker was well regarded but it was a surprise to many when he went so high in the draft order.   However his time with TFC over the past two seasons was very much hit and miss on the pitch – although he fared better playing with the national team – it was still a frustrating two years as one of the more polarizing figures on the pitch for fans.

Bekker is a talented player and possesses skills that make him valuable in a number of situations for teams. Over the past two years he’s shown a decent dead ball ability and his free kicks (while yet to result in goal or assist), at least get placed where they’ll do some good – unlike those of some of his teammates.  It’s hard to peg Bekker though – often not seeming that offensively minded is fine if you’re going to play defensive mid; especially if you’ve got Michael Bradley on the pitch next to you. So many back-passes though. So many.  Possibly the most uttered words surrounding Bekker’s game at any given time is his apparent unwillingness to push the ball up the field.  Add to that is the second slow reactions to everything – so often he seemed lost and unable to read what is happening around him.

However Bekker suffered defensively as well, in fact most of the ire that gets directed at Kyle (present company included), is from that side of his game, and for many of the same reasons his offensive game suffers.  Slow reactions to what’s happening, passing the ball in the direction of danger instead of out, and most damning – disinterest.  I’m not saying he is completely disinterested in playing defensively, but watching him casually jog back on far too many an occasion is enough to get me riled up.  As I said above Bekker fares better with the national team – whether that’s a better place/system for him to use his talents or Floro not having much choice (likely a combo of both), he almost thrives but still, no goals.  Which, from a player that was known for his ability to score and create for his teammates before being drafted, is frustrating.  His play with the national team is often more positive and causes far less ire than when playing for TFC – hmm, is this all Toronto’s fault? Something in the water?

Of course we know that development of talent in the first team has never been TFC’s strong suit and that may be part of the issue, so a new situation will hopefully bode well for his game (and for Canada).   In the end Toronto has too many midfielders (both existing and newly signed), that can do what Bekker does and do it better.  A trade to a team in a different conference and for some allocation money is really the best we could hope for as Toronto fans.  Less of a likelihood that he will burn us when/if he finds his feet in Frisco and a place where he can hone his skills, skills that may help Canada in the upcoming months – here’s hoping that’s the case at least. One interesting side note; FC Dallas now with three Canadians (Janeill Hollett, Tesho Akindele and Bekker), RSL drafted a Canadian player as did a couple others – are the roster restrictions with Canadian players on US teams about to be lifted?  That of course is another story, but if true would be fantastic.   Good luck Kyle, see you at the Gold Cup.