Posted By Duncan Fletcher on Mar 12, 2015 in News, Uncategorized | 0 comments 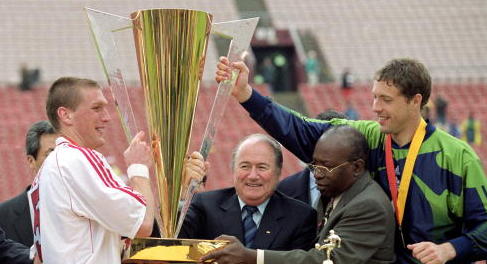 I love how De Vos gets real close to the trophy and forces Warner and Blatter to squeeze into Forrest’s underarm.

The news came out a while back that Toronto would get to play host to a Gold Cup double header this year, featuring two games from Costa Rica’s group. Very exciting, but just who might be the other 3 teams that would emerge from what was surely a fair, random and in no way rigged draw by Concacaf.

Well hold your breath no longer Toronto, as the draw was announced, not shown live or anything like that, oh no, merely announced, but not to worry all above board behind the scenes no doubt. Let’s see who we got!

Canada!   Wow! Amazing! what are the chances? Well that will certainly help ticket sales.

So yes, Concacaf did it’s thing and ensured that Canada would be in group B, and if you’re one of the other countries at Canada’s level, you’ve got to be a bit pissed off that we got the automatic draw away from either Mexico or the US. Sadly though, even when things seemingly get Concacaffed in Canada’s favour, they don’t really, as Costa Rica are quite good these days, World Cup quarter finalists, and for what it’s worth ranked 13th in the world, highest of all the Concacaf teams, so yeah, thanks for nothing Concacaf.  Ah well, so we won’t finish first, what about the rest of the group? Jamaica and El Salvador you say? Bugger. Wait, who’s the minnow in that group, there’s usually one weak team everyone can beat up, why don’t we have that team?  What’s that? Canada IS that team? Oh, I see.

So yeah, it’s a tough group to get out of, and given Canada plays Jamaica and El Salvador, the two teams it’s presumably chasing, first, there’s a plausible chance we might even have got knocked out before they even get to the gloriously dignified National Soccer Stadium.

But maybe there isn’t, after all there are 8 teams in the quarters out of 3 groups of 4, so the top 2 3rd place finishers also qualify. That seems possible, but does make the lack of a minnow to beat up on hurt that little bit more given that goal difference might well come into that.

It’s not like Canada is going to repeat it’s 2000 Gold Cup winning heroics though, so the main goal for Canada is to do well enough to qualify for the 2016 Copa America. How do they do that? Well, here’s the basics, there were 6 Concacaf spots, they gave 2 to US and Mexico, just because. Costa Rica also qualified as the 2014 Copa CentroAmerica winners, as did Jamaica as the 2014 Caribbean Cup winner. So two spots left, which will be determined in the Gold Cup.

If any of the other teams beyond those 4 wins it all, they qualify and then the next best 2 finishers have a playoff to decide the other qualifier.  If one of the already qualified teams wins it, which is likely, then the top 4 finishers of the others play off for the 2 remaining spots. the winner of 1 vs 4 and the winner of 2 vs 3.  So get to the quarter finals and more than likely, though not guaranteed, that would at least get Canada into that playoff game, however that would work, details so far seem non existent on that.

Anyway, here’s the link to the full draw details. Canada plays El salvador on July 7th in L.A, then Jamaica on the 11th in Houston (two great places to play in the summer, fantastic) before playing Costa Rica in Toronto, with El Salvador vs Jamaica the opening game of that double header.  One ticket gets you into both games, so there’ll be 4 fanbases to buy up tickets, who’ll all presumably end up mingling together in some unholy mess, should be an interesting night. Also, there’s a good chance that all that extra seating currently being built will get put to full use. Tickets are already on sale, with a pre sale code of concacaf15, ranging from $25 to $150 each, but if you’re planning to go there and support Canada, I’d advise getting tickets through the Voyageurs who’ll presumably be announcing plans soon.

Hopefully there’ll be a big crowd for both games, I certainly intend to be there for both, and hopefully the Jamaican and El Salvadoreans will stay behind for the 2nd game and cheer on Canada, though probably it’ll be all about cheering on whatever result helps their team qualify. That thought’s a bit alarming really, Canada’s often up against it in the stands when there’s only one nation cheering against them, so if you’re waffling about going to this game, don’t! Not only for the sake of supporting Canada but given we have no Women’s World Cup, this will be one of the most important games ever played in our crappy ground, and might well be a test run for further games, ie a Gold Cup shared equally with the US, or even hosted entirely within Canada, or even that whole 2026 dream.  At the very least it’ll be fun.