Home » Analysis & Opinion » DP Strangelove or: How I Learned to Stop Swearing and Tolerate Thierry Henry

DP Strangelove or: How I Learned to Stop Swearing and Tolerate Thierry Henry 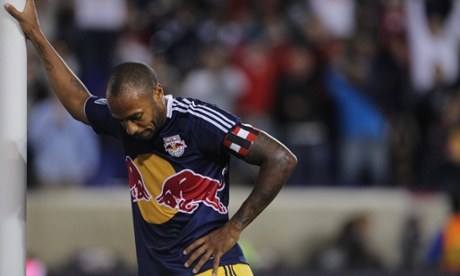 Mon Dieu! It is exhausting being moi.

It hurts to write this. Hurts real bad. Even thinking about it makes me feel dirty.

My earliest – and still many of my best – sporting memories are of my younger self craning my neck from amidst the burly throng of Londoners packed together on White Hart Lane’s Shelf Side. It was in that volatile, rotating mass of humanity where I was baptized into football, learned some of the most hilariously vile curse words, felt comradery with total strangers and also figured out how to channel my footballing frustration towards a solitary villain.

While many fixtures at Spurs’ famous ground have wonderful electricity, no other has the innate ability to make every hair on your body stand on end like those against local rivals Arsenal. The disdain both sets of supporters feel for each other is a birthright, no explanation needed – it’s just there. The venom you learn to direct at the opposing side is all encompassing but there is always a talisman that is your particular, personal lightning rod.

For me, that target eventually manifested itself in the form of Ian Wright; the prolific Arsenal striker. His limitless ego and bravado was backed up by his undeniably natural goal-scoring touch. My swearing game was drastically enhanced in the direction of the charismatic poacher. All of that bitter rival club’s success was encapsulated in that all-knowing grin of his. Wright darting around in that famous red kit as they began to ascend the football table while my dear club lurched to-and-fro cuts to this day. I will still never buy a JVC product.

However, as we grow older, our favourite heroes and most exasperating villains age with us, their careers petering out with time. While Ian Wright’s bombastic persona could have been supplanted by the likes of Tony Adams, Patrick Vieira or David Seaman as my lead villain they just didn’t seem to have the same effect on me. Then in 1999, via transfer from Juventus, Thierry Henry arrived in North London.  My eyes tightened. My lips pursed. The next one had arrived.

Like his predecessor in my bad-guy football film cast, Henry immediately embodied all that you want in your villain: arrogance, swagger and a self-awareness that only has an effect when backed up with infuriating talent. The fact that he had extra Gallic pomposity and a mischievous charm (to his fans at least) made Ian Wright seem downright cuddly. He spent eight prolific seasons at Arsenal terrorizing opposition keepers, Spurs keepers in particular (so it seemed to me) while strutting about in that famous red kit. I will still never buy a Sega Dreamcast.

The heavens eventually parted and Henry departed North London for the exotic climes of Barcelona.  That was it. I could safely ignore him with the exception of the odd La Liga highlight. Saturday mornings were breathable again. His part in the Great Irish Football Robbery irked my fondness for the Irish side but only enforced my long-standing knowledge that he was football’s greatest scoundrel. For the most part I was rid of him. Or so I thought.

Flash forward to a transplanted life where the Shelf Side has become a trip “back home” and my new footballing domain had become BMO Field’s South Stand. Surely this was a safe place to support local football; where the nearest thing to a villain was a Kansas City Wizard or Crew Cat, right? Then he showed up. Thierry Henry, the shiny post-David Beckham Designated Player signing for New York Red Bulls. That same swagger, those familiar goals, that confident smirk. Thousands of miles from the last place I saw him live, yet I instantly reverted to that boy yelling ridiculous words at Ian Wright.

Henry’s arrival in MLS introduced some horrifying side effects. Arsenal supporters arriving in Toronto FC’s Supporters Section, decked out in that kit which has haunted me for so long. Singing songs for the best player on the opposing team? In essence, cheering against the home side? Disgraceful! How could this happen? Not in my safe place! Especially not while Henry was proving to be one of the league’s better DP signings! Woe is me – I had my villain again. However, years later and upon his recent retirement announcement, I have been forced to re-visit my feelings on my long-time Franco-foe’s time in Major League Soccer.

So, what brought about this navel-gazing you may ask? Two words: Jermain Defoe. If you had asked me one year ago today who I would have preferred as a Toronto FC designated player – Henry or Defoe – my scoff would have been heard for miles. Defoe – the longtime hero of the club I was born into would cleanse my MLS palate just as Henry’s career in this league wound down. That was the plan anyways.

As Henry slowly started to draw the curtain on his time in New York – as close to a model DP as a club in MLS could ask for – Defoe’s Big Bloody tenure with TFC began nose-diving into a nightmare scenario for The Reds. Where Henry spent four years embracing the league, the city and the supporters – all part of the unique off-field responsibilities that come with being a MLS DP – Defoe seemed to quickly lose his zest for TFC’s latest project, the lustre of his financially-driven move across the Atlantic dulled.

Like it or not, a DP in this league of Henry or Defoe’s stature not only has to produce on the pitch (although Henry sometimes chose when to produce based on mood) but must also accept the cross of being the face of their club. This can mean a few more demands than they may have had in Europe but that is often rewarded with a contract that few clubs in the “old world” were willing to bestow upon them. The juxtaposition of Thierry Henry studying up on MLS opposition while taking a PATH train to Harrison, New Jersey versus Jermain Defoe sitting in First Class on his latest flight back to London to “rehab” couldn’t be more illuminating. One of those men embraced his MLS “project” and his new home, the other quickly lost interest in this sometimes peculiar, young league.

If Jermain Defoe had welcomed this opportunity to become the face of TFC, and possibly MLS, even half as much as Thierry Henry did in New York, TFC supporters would probably be a happier lot today. It hurts to say that – but it’s true.

Make no mistake – I will never, ever be a fan of Thierry Henry. I still don’t like him as a player, his personality is one that only ingratiates itself to fans of the club he is playing for and the image of his eternal smirk in that famous red kit is a red flag to my inner cockerel. I’ve still never flown Emirates.

However, as Henry leaves professional football and in particular Major League Soccer, I am left with a grudging respect for the role he accepted and excelled at in this wacky league that adult me now finds himself attending. As a supporter of MLS’ growth, I have to appreciate that – if little else about the man.

Now I have to go wash out my keyboard with soap.