Home » Analysis & Opinion » Feeling warm and fuzzy? Surprise, here’s TFC and MLS to take care of that for you.

Feeling warm and fuzzy? Surprise, here’s TFC and MLS to take care of that for you. 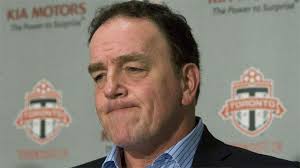 This feels like a ‘regretful looking Anselmi’ kind of moment.

So, Wednesday night was awesome, the playoffs have been great, hell most of the season has been very very good on the pitch. Even off the pitch, things are much better, there’s very few really annoying decisions, playoff pricing and season seat renewal were reasonable, they took the Voyageurs Cup seriously, didn’t play a friendly, so many good solid sensible decisions from TFC, and also much less hype and wow aren’t we awesome than usual, even in a season where it might be deserved, I like the Bill Manning era.  All very refreshing, and after Wednesday, many people were saying that it was the rewards for all the hard times, that it makes it all worth it, that those many years of shitshow can now be forgotten and moved on from.

Perhaps they can and should be, but hey, right when you’re feeling your best, here comes TFC with a nice little reminder of why we’re always leery and mistrusting. MLS final tickets. This didn’t go well.

The quick version, MLS snapped up a bunch of premium seats for their sponsors and such like. That meant a lot of season ticket holders now didn’t have their seats. The South end wasn’t included in this, they all get first refusal to their seats, a wise decision for quite a few reasons, but everyone else, you don’t get your seats, you just get to go on ticketmaster and you’re guaranteed as many seats  as you usually have, with the choosing done in sessions based on your tenure as a season ticket holder. Some people were able to go in and grab their usual tickets, no problem, that’s how it went for me. Many others weren’t so then just had to grab any tickets. Obviously that means the next chunk of people, their tickets might not be available so they have to displace others and round and round we go. A big game of musical chairs with a lot of people now not able to sit in the seats they’ve had for god knows how long, unable to watch the game with the people they usually sit near. A big part of the game day experience, now gone, right when it matters the most.

First off, the caveats.

Yes, this was a shitty situation imposed on the club by MLS, who wanted to take all the swanky seats for themselves, media, sponsors all that nonsense that comes with a championship game, and apparently for 1500 travelling fans which is at least a noble cause. TFC would probably rather not have to deal with this.

Yes, it’s something that happens at these games, this isn’t all that unusual.

Yes, it’s not entirely TFC’s fault, and certainly not the fault of the ticket reps who will have borne the brunt of this, whether answering calls, or trying to put out fires on twitter.  They did their best, given the tools and constraints they have to work with.

And yes, #FirstWorldProblems, who’d have guessed we’d have to deal with a problem regarding MLS Cup final tickets to see TFC play, in Toronto? I certainly wasn’t expecting that, and I’m sure 19 other fanbases would like to be having to figure this out right now.

And yet. And yet.

How TFC chose to handle this was really really not good at all. Unlike what many in the media, or some of the usually vocal supporters groups in the south end (all of them seemed to shy away from it more than anything, disappointing if not surprising) might be trying to tell you, they fucked up, and they do deserve plenty of anger directed at them, as well as having to take the share that should really be going to MLS.

This was not a surprise to TFC, it can’t be, arrangements have probably been made, or at least negotiations have been happening between MLS and all 3 possible hosts as soon as the final 4 teams were decided 3 weeks ago. And yet nothing was said, no kind of notice was given at all.  People went to the game on Wednesday, had a great time, left with a casual ‘see you next Saturday’ to those around them and away they went all happy and expecting another very smooth process to grab their tickets, dreading only what level of increase big bad MLSE might impose for such an occasion (turns out the pricing wasn’t too bad, another increase, but a smallish one, acceptable in the circumstances.)

Then the email came on Thursday letting people in on the secret that there were no guarantees on location, and you’ll have to go buy tickets in less than 24 hours, and no we can’t tell you what the price is, good luck trying to organise things!

That led to a lot of fretting and complaining, which of course carried over into today and throughout the day after people went through the process, with many reports on twitter and elsewhere of people having to take unfamiliar seats, in worse locations, or cut off from the people they enjoy watching the game with. I haven’t seen anyone saying they ended up being forced into a higher ticket bracket, but I’m presuming by the time the music ended towards the end of the day some people had that problem.

The whole thing couldn’t have been avoided, but the damage could have been mitigated, the raw emotions smoothed, with just a bit of notice, to give people a chance to try and figure out an alternative rather than a mad and hurried scramble on ticketmaster  (with some people not even given the option of choosing seats, instead getting just the ‘best available’ option).

One ticket rep mentioned on twitter that the team didn’t want to jinx anything. If i thought that were serious I’d be furious, but instead I laugh, this is a team that loves to tempt fate by planning ahead, we get 2 voyageurs cup tickets every year in the season ticket package, then a refund if we lose the first round. Remember getting playoff tickets for the wild card round? They came bundled with the ticket for the next leg, again with a refund if we didn’t make it. Which totally makes sense, but it was very much jinxing it.

Notice should have been given, at least a week beforehand, shrouded in all the ‘IF we make it’ caveats you can throw in an email that this might happen. Would people have been angry then? Absolutely. Would it have been pointless anger if TFC had lost? Sure, big possibility of that. But people would have at least seen that the club was trying to make the best of it, was trying to help them get through a crap situation not of their own choosing. But to instead choose to leave it to the last minute, thus ensuring maximum anger, with little time to move to acceptance and try to do something else? That’s a shocking decision. That’s not good planning, it’s cowardice, on behalf of team and league, that has pissed off a lot of their customers, souring the biggest game they’ve ever been in, and their long term relationship with the club. Right at the moment when everything should be puppies and rainbows, forgiving the past, enjoying an awesome present and looking forward to a bright future.

A football club is about so much more than what happens on the pitch. Feeling respected, or at the very least not feeeling tooooo exploited by the club to which you’re very much a captive audience is a necessary part of what makes a happy fanbase. TFC use their fans for marketing, and really have relied on them over the years to be their best salespeople, and fans will go along with that as part of the bargain. ‘All for one’ and all that. It’s an uneven relationship, with fans doing all of the giving, but hopefully there’s enough good times and not to many bad times so it seems worth the effort.

Then something like this happens, a simple reminder of just what the relationship actually is, and which can generate so much emotion, anger and festering resentment from those affected. It’s all so so unnecessary.

Anyway, at this point, the club should be looking at damage control to get back that loving feeling.

First up, this is such a 100% no brainer I’d actually be surprised if it isn’t happening behind the scenes. Anyone who was forced into a higher price bracket should be given those seats at the price for their regular seats. Absolute minimum they can do.

After that, the club should be very actively working to go over and above and compensate anyone that was affected by this, whether it’s a price break, vouchers for food or merchandise, whatever they need to do to make things better.

TFC fans have been shat on in many ways over the years, and many just keep coming back, such is the nature of sports supporting. It has generally been very better recently, but they need to be going out of their way to show that this isn’t just the same old TFC, supply and demand, apples and oranges, people LIKE Marlies packs, get used to it and so on and so forth. Show you give a shit about people who’ve been buying your tickets and paying all your wages all these years. For a team that just got to it’s first ever MLS Cup, and gets to host it, there is way too much negativity out there. It’s totally justified and it really didn’t have to be this way.