Home » Analysis & Opinion » So then, about that whole playoffs thing.

So then, about that whole playoffs thing. 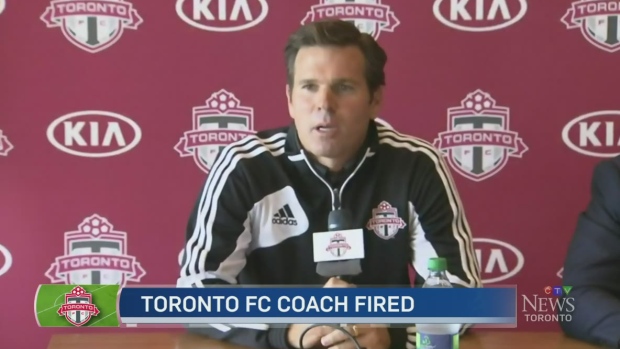 Yeah, I’ve used this before, but a boy can dream can’t he?

It’s been a few days since TFC’s grand playoff adventure came crashing to such a miserable and predictable halt, this is clearly a bit late, but really it’s taken a while to rouse the energy needed to write this. The whole thing was just so dispiriting, it wasn’t ‘a hard fought game and well, one team had to lose’ kind of game, it was one of the most thorough defeats in the club’s history, that was 5-0 in New Jersey all over again, and the way it happened was so so predictable.

The one post game quote that really got my attention was Greg Vanney, putting up the fight he was so clearly unable to inspire in his team, saying: “It’s not the ‘same old TFC’. We made the playoffs. We did a lot of different things this year that haven’t been done in past years … This is a project. It’s a process.”

That’s just ridiculous though, this was so so the same old TFC. The entire season. Start off a bit wobbly, come on strong in May and June then start to struggle in July . The ‘summer swoon’ after an encouraging late spring run is something that has happened in many seasons, aside from the truly lost years of 2011-13, it’s happened every year, under Johnston, Carver, Cummins, Preki, Nelsen, even the 2012 season kind of fits the pattern despite the coaching change near the start of the upswing, now add 2015 and Vanney to that list.

So the way the season went and ended was no surprise, but what’s the reason for this? Well for that we can go back to another quote, this one from Tim Bezbatchenko earlier in the year.

“Teams tend to get found out in July. You have one system and one way of playing and over the course of the season things happen and people learn about you. Everybody is watching everybody’s games.  The best coaches are the ones that have success over the years by adjusting, can make tactical changes, and are not just reliant on personnel changes.”

It’s fair to say that generally speaking, TFC have never employed ‘the best coaches’ and thus their teams have been found out and the good times stopped flowing, you can add Greg Vanney to that list. TFC’s inability to beat the good teams in the league since July, those with the good coaches who are making the adjustments, has been well documented, and Thursday’s playoff loss exposed his inability to adapt in excruciating fashion.

The season ending this way, the way many other have, albeit with clearing the ultra low bar of 6th in the East, wasn’t the only thing that inspired deja vu, Thursday’s performance was perfectly representative of all the problems TFC have had this season.

There was the defence that was way out of it’s league, with a right back who’s not really a right back as the focal point, none of them really getting the support they need from the midfielders and the teamwide defending as a whole. Robbie Findley once again out there, contributing nothing, providing no threat the Impact really had to pay attention to, allowing them to focus more on Giovinco. There was Jozy Altidore and Michael Bradley  being invisible and ineffective, not a constant by any means but something that has happened way too often given their price tags and reputations. Given the lack of support he received, it’s no surprise that once again against a good team Sebastian Giovinco was nowhere near the dominant, unequivocal MVP he looks like against the poor teams.

Mainly though it was all about Greg Vanney, and once again, the lack of adjustments, in both the short and long term. The first half of the previous game against Montreal had gone well, Bradley and Cheyrou able to impose themselves on the game and help get Giovinco into the game, with Montreal offering very little. As good coaches do, Mauro Biello made adjustments, taking off Venegas at half time, replacing him with Dilly Duka and solidifying the midfield, making it harder for TFC to break forward while putting pressure on the defence. Also more attacking down Toronto’s right side proved very effective. Vanney was unable to react quickly enough and thus the game was lost and back to Montreal everyone came a few days later.

After that game Vanney talked not about making changes to adapt to what worked so well for Montreal in the second half, instead it was promising more of the same, that TFC just needed to focus on aggressively pressing Montreal back, playing in their half. Basically it was Vanney saying he didn’t need to adapt, he didn’t want to be reactive but instead to impose his game, that his plan was right, his players just needed to commit more to it. It was alarmingly similar to what we heard from him when explaining all the defeats at the end of the 2014 season, a philosophy that’s been proven ineffective and easy to counter many times over.

Still there was hope that might be a bluff, that we might see something different, something clever and unexpected, perhaps a different formation, or even just replacing Findley with a more defensive minded player to help protect Jackson and the defence as a whole. Then we saw the tweet, and he actually had picked the same lineup, in the same formation and was hoping for better. Biello meanwhile doubled down on his previous adjustments. Patrice Bernier added to the midfield with Reo Coker and Donadel meant Montreal was winning the midfield battle, Bradley and Cheyrou getting nothing going and thus the forwards were starved of service. As for the Jackson at right back weakness, they threw Piatti right at him, early and often.

That worked incredibly well, Jackson got no help from Findley or the midfielders as TFC were trying to push forward, and thus he floundered. That put way too much pressure on Josh Williams and thus he floundered. Piatti ran riot. And Vanney did nothing. There was no noticeable change in formation or tactics to help protect the defence and unsurprisingly , they looked panicked and lost and the goals poured in due to mistakes and horribly chaotic defending.

3-0 at half time, and it was game over, the change to 3 at the back with Jackson pushed into midfield was as ineffective as it was too late and the Impact cruised home, with the luxury of throwing Kyle Bekker out there just for trolly shiggles.

There are many arguments that can be and have been made in favour of Greg Vanney getting the sack, the outrageously bad defending, the stumbling into 6th in a particularly weak conference, the tactical naivety that’s been exposed often. But these two games, right up there among the biggest games in TFC history and both unequivocal coaching failures speak louder than any frustrated fan, blogger, podcaster ever could.  The lack of progress and obvious improvement over the long term of the last year and a half (hey, this is TFC, long term’s a relative thing here) are disappointing, the lack of adjustments within 2 games over 4 days against the same team is absolutely mind boggling.

The main argument in favour of Vanney is simply stability, and given TFC’s history, it’s an attractive one, but you really should make sure you have a good coach before you commit to him for the long term, and Vanney has in no way shown he can be that man. ‘Student of the game’ is a label we use fairly derisively here at the Vocal Minority, if these games could be seen as the final exam, well let’s just say he put the F in TFC.