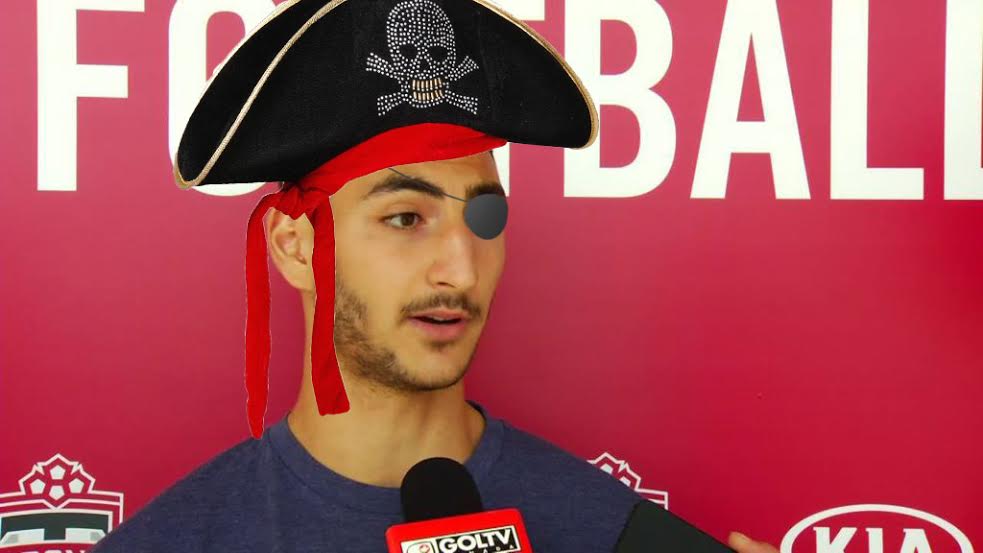 It seems like the partnership between Toronto FC and its USL affiliate TFC II (“The Search for Mo’s Gold”) is already proving beneficial at both levels. The organization announced today that the big club would be sending seven players currently on its roster on loan to the USL side as they prepare for their club opener versus Charleston Battery this weekend.

While most TFC observers were pleased when the announcement was made to create a “Mini-Me” version of the club in Vaughan, it is heartening to see its benefits being put into practice early in the season. In what will likely become a regular shuttle bus route between BMO Field and The Ontario Soccer Centre, The Big Reds have sent forward Jordan Hamilton, midfielders Manny Aparicio, Jay Chapman, Chris Mannella, defender Ashtone Morgan, goalkeepers Quillan Roberts and Alex Bono down/up to The II. Phew.

The only minor double-take on that list is Ashtone Morgan who, despite lack of playing time over the last two seasons, has been a mainstay with TFC. However, if the player’s ego can handle the temporary demotion, getting his legs – and perhaps confidence – back up to a high-level could be invaluable to both him and the organization.

Overall, moves like today’s en masse loaning are one of the best uses of having an associated “B” club. No longer are TFC’s younger prospects left to stagnate at the whims of a lacklustre reserve league but instead are able to hone their craft against established sides in a competitive league where winning means something. Viewing this from Wunderland AFC’s (Yes, another TFC II nickname) point of view, it is a competitive shot in the arm for Jason Bent’s squad who will depend on the kindness of Vanneys in order to field a side that can challenge the more veteran-laden sides of USL such as Charleston.

Was that all II much TFC II info for you II take in IIday? “II bad!” says the club. The II kept the hits coming after big brother’s loan announcement by making a couple of announcements of their own. First, the club anointed Chris Mannella as its first captain which if TFC history serves us right means he gets automatic entry onto the TFC II Wall of Honour and inexplicable employment with the club long after retirement. Kudos!

With “Cap’n II-bing” in place, The II then announced a raft of other signings that along with the loans and the TFC signings of last week should fill out the squad nicely for now. The latest signed to USL contracts are:

D – NIKOLA STAKIC, another TFC Academy grad who without knowing any better sounds like a hulking bruiser from a mid-90’s Croatian national side. He’s probably not. NICKNAME: “Stacks”

M – MASSIMO MIRABELLI, the most professional of the new signings, he appeared in 27 matches over the last two seasons with FC Edmonton of the NASL. The 23-year-old ball-playing winger also played semi-professionally in Finland and has featured in the Canadian U20 program. NICKNAME: “Belly”

M – ADAM BOUCHARD, a 19-year-old who has played for TFC Academy as well as a spell in the youth ranks of Uruguayan club Defensor. NICKNAME: “The Mighty Bouch”

M – MARK SERJEANT, is arguably the biggest unknown of today’s new crop emerging from a school called Grand Canyon University which may very well be a series of tents at the bottom of the actual Grand Canyon accessible only by donkey. Now that’s football analysis. NICKNAME: “Canyonero”; “Sarge”

So there you have it, more meat on your Tee Eff Cee Too for 2015. So fans, in true TFC II fashion, hold two scarves up high and tune into YouTube where the majority of USL matches will be streamed live. The II open the season Saturday night at 7:30 PM ET in Charleston. The future of Toronto FC is only a decent Internet connection – after you press “Skip Ad” – away.