Home » Analysis & Opinion » Jo-zy can you see? TFC just keep on getting more and more ‘Murica.

Jo-zy can you see? TFC just keep on getting more and more ‘Murica. 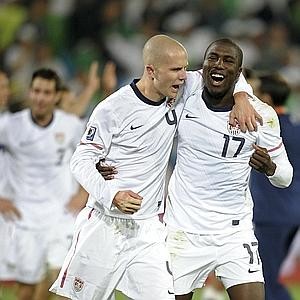 Altidore and Bradley model TFC’s new 3rd kit. I like no sponsor, but the badge needs some work.

It’s not official yet. The necessary winks and nods have to be exchanged and the rules massaged in Uncle Don’s Rub ‘n’ Tug Parlour until the desired happy ending is arrived at in an explainable fashion (Hold on, according to this update from Gareth Wheeler, MLS tried all that sort of thing to get Altidore to New York, but TFC chastely resisted, running horrified from the back room of what they assumed to be a legitimate and honourable Spa. Seriously, for some reason TFC have figured out how to stop MLS from just doing whatever they want. We’re a rule unto ourselves inside a league that’s a rule unto itself, this is scary), but eventually Jozy Altidore will be unveiled as a Toronto FC player. Depending on the terms of his contract and just what other moves happen between now and the end of the season (defenders? please? any time now) I think this could be a move that works out well. It’s also another big step down the QEW to America. We’ve reached Fort Erie and are now impatiently honking our horn in the line, waiting to cross the border at this point.

Despite the tone of that last sentence, this isn’t an anti-American article, it’s not really about the USA over Canada (though I’ll briefly get into that later on in the article), it’s more about the style of play and type of player that TFC seem to be embracing, I’m using ‘American’ as a synonym for athletic, fact, physical, all that sort of thing.

Back in 2012 when Kevin Payne came on board, he talked about the necessity of looking to South and Central America to bring in skilled players who can make an impact on a smaller budget. That was put into action with the arrival of Matias Laba and Max Urruti, with a deal to bring in another player part of one of those deals.

It’s hardly revolutionary stuff, more and more MLS teams are turning towards South and Central America to find the skilled players to build a team around; Diego Valeri, Javier Morales, Pedro Morales, Federico Higuain etc etc ad infinitum, MLS is shifting away from it’s beginnings and it’s reputation as a physical league for athletes and evolving into a more technical league where skill is valued more and more.

Then of course after Tim Leiweke came on board, there was that big difference in philosophy and Payne was out, and Tim Bezbatchenko was in. Immediately Urruti was transferred to Portland, mainly for Bright Dike, skill transferred for ‘carnage’, a good indication of the new priorities.

After that, almost all the signings and trades followed that route to a more physical style (thought not all, Gilberto certainly doesn’t fit this argument, though it looks like he may well be on the way out). Michael Bradley is certainly a skillful player, you could make a nice article looking at gifs of his best passes, Matthew Doyle of MLSSoccer.com recently did just that, but what most people rave about is his energy, the tackling and interceptions, remember at the World Cup when he was the player who ran more miles than anybody else.  He brings a lot more than your average ‘American’ but that’s his main attribute. Jermain Defoe, again brings more finishing ability than your average speedy striker, but speed is his big thing. Dominic Oduro’s pretty much only speed, a much different player to Alvaro Rey, Jackson has a certain wiliness to him, but his game in general is more ‘American’ than Brazilian. Robbie Findlay’s about as ‘American’ as they come, hard work and speed are his two main selling points, it’s hardly a surprise that Real Salt Lake let him go to the waiver draft where TFC picked him up at his previous, probably too high, wage. Now we have Altidore, the traditional physical centre forward to augment all that pace, the rich man’s Bright Dike if you will. Pace and power seem to be the order of the day here, Skill’s a nice extra for sure, but not really the first priority it seems.

It’s not necessarily a bad thing, especially when built around better than MLS average players such as Bradley and Altidore. The two of them have linked up well with the USMNT and TFC’s tendencies towards long ball play and a lot of crosses into the box probably aren’t going to disappear so Altidore’s a good player to have on the end of those crosses, or fighting to win long balls, hold up play and maintain possession.  Also, frankly any plan that everyone’s on board with and the players fit in with has got to be better than the dysfunctional mess running in different directions we’ve grown used to seeing.  I’m not thrilled with the direction, but I’m willing to give it a shot, it’ll probably be enough to get us to the mediocre goal of the playoffs.

Where this does actually become about Americans is the fact that they went so hard, and so expensively for Altidore. Given his recent struggles, there are few people outside of MLS or US fans who would look at him as a prize asset, nowhere else would he draw such a big transfer fee, or such big wages. That pay cheque (whether it is as big as the rumoured $6m a year or not) is all about his status as a USMNT starter certainly not his playing record. I can certainly see why MLS or the USSF might be interested in overpaying to bring Americans back to help grow the league and the game as a hole in the US, or even to help out the US squad (though Jurgen Klinsmann seems to disagree with that part of it), but why should a Canadian team be bothered about that.

New York reportedly were willing to pay $7.5m to TFC if they’d stepped aside from their position higher up the allocation rankings. With that amount of cash for a transfer fee, combined with the wages they’re prepared to give to Altidore, a better player could surely have been found. If that doesn’t help the game in the US, frankly who cares, get the best player you can, forget about nationality.  If Leiweke, Bezbatchenko, Vanney, Bradley and co, the all American brain trust making the decisions genuinely feel that Altidore is more valuable than whatever they might have got with that cash, that’s a little worrying but I’ll give them the benefit of the doubt. If patriotism is getting the best of them and inspiring them to overpay, that’s very alarming, especially patriotism for a foreign country.