Y’all ready for fluff? It’s time again for two of the football world’s finest purveyors of plush to do battle in the one and only – Mascot Hysteria!

He may have had the most frightening face and smoothest crotch of any Mascot Hysteria challenger but the Brazilian beast known as Tigrao was no match for the USL’s mad marsupial Kickeroo! In one of this competition’s biggest blowouts, the reigning champ (representing Richmond Kickers) crushed Tigrao with an aggregate 79% vote. Kickeroo continues with his eye and pouch on a record-breaking third win in a row.

No time for Kickeroo to rest on his giant Australian-Virginian haunches though as the competition moves into another round and introduces a new challenger. As always, it’s you the Vocal Minority reader who decides the winner so think fluffy thoughts and vote! Simply do one of the following: put the name of your winner in the comments section (Comments always welcome!); vote in the handy poll below; or, send the name of your winner to @vocalminorityCA on Twitter with the hashtag #MascotHysteria 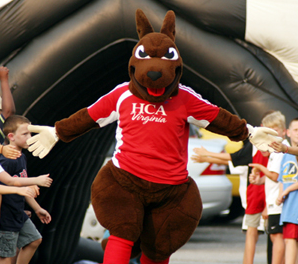 BIOGRAPHY: Fans of Mascot Hysteria are familiar with the twists and turns of this ex-pat pouch-packing powerhouse by now. The reigning champ has proven that a lower division North American mascot can tussle with the best of them from more traditional footballing nations. What you may not know is that Kickeroo almost called it quits before this USL season in a move that would have seen him not eligible for this competition.

On a cold, blustery night last January, Kickeroo was meeting a “friend” at a D.C. airport hotel bar when suddenly the guest band struck up a familiar tune. They were only into the first few notes of “Never Tear Us Apart” when Kickeroo realized that his childroo heroes INXS were on stage! Immediately Kickeroo jumped up and dropkicked the latest Michael Hutchence-replacement through a window and began belting out the hits with the Australian supergroup. Despite a great gig and his willingness to “drop this mascot rubbish like a hot shrimp on the barbie” the remaining members of INXS informed him that they wouldn’t be hiring him as the new lead singer due to Kickeroo’s Australian-Virginian-Roo accent and his party animal reputation. “Not again…” one of INXS was rumoured to have muttered “not again.”

Kickeroo returned to Kickers for pre-season with no mention of this flirtation with rock n’ roll.

CATCHPHRASE: “I’ll give you a Vegemite sandwich – and a punch to the throat!”

BIOGRAPHY: Just beyond the delicious smells of fried food on the pier and the pumping bass emanating from Essex lads’ cars cruising the streets of Southend-on-Sea is the Thames Estuary and spiritual home of Southend United mascot Sammy the Shrimp. Emerging from the coastal tides of the Essex Riviera, Sammy left behind his mischievous youth as “your average Essex boy/decapod” to become a valued part of the seaside community.

While Sammy still enjoys the nightlife and E-list celebrity status that deep Essex provides he concentrates on two things now – supporting Southend United and fighting what he claims is “the greatest evil of the modern world” – sushi restaurants. Now a respected member of the community, Sammy has been approached to run for local office but his minor-celebrity past as a backup dancer for Essex group The Prodigy and a string of high-profile break-ups with soap opera actresses leaves him open to attack from the “pro-sushi brigade” and their “sashimi agenda”.

Sammy is currently preparing to spearhead a major campaign against MLS club Toronto FC for their insistence in using the phrase “Southend Supporters” in their misguided publicity campaigns.

CATCHPHRASE: “I’ve got the brains AND the prawn!”