Posted By Duncan Fletcher on Jun 2, 2015 in News, Uncategorized | 3 comments 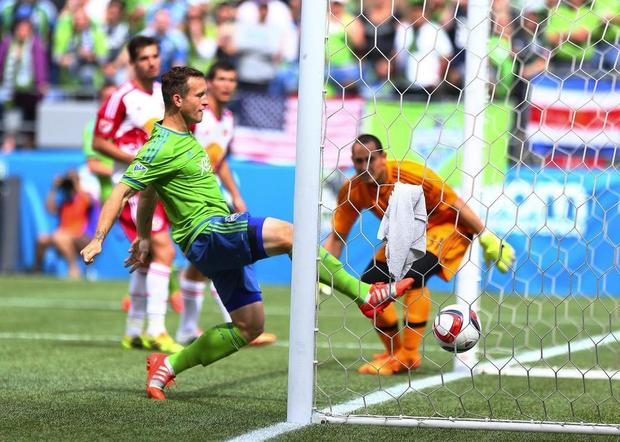 As always you can catch this without all the links and videos and with terrible impersonations as part of the Vocal Minority Podcast, coming out later this week.

The big winners this week were the Seattle Sounders. They beat Colorado midweek then took on the Red Bulls on Sunday. They trailed 1-0 before Marco Pappa equalised, and then with the game tied 1-1 in the 89th minute, enter the Chad, and what an impact he had, scoring the winner with an incredible long distance shot.  That took Seattle up to 26 points, leading the Supporters Shield race.

Portland also won twice, beating DC midweek as Will Johnson made an immediate difference, and then Colorado on Saturday, A spectacular Sam Cronin volley equalised in injury time before Jack Jewsbury got the winner. Caleb Porter described it thusly “Jack, the old salty dog, finding the goal at the end of the game….”.  Pablo Mastroeni wasn’t going to be outquoted though, saying “Before football and tactics the game of soccer runs parallel to life: it’s confidence and it’s momentum,”. Dude.

Those results mean the Rapids are firmly bottom of the West with 13 points, while Portland are now into the playoff spots with 19.

That loss in Portland was DC’s 3rd straight winless game amid of a bit of an injury crisis, but they got back in to the swing of things with a come from behind win over Philadelphia, though their injury woes got worse when left back Taylor Kemp left with a groin strain. They’re now 4 points clear in the East on 25 points.

Back in the West and FC Dallas are doing their traditional mid season slump, winless in 3 now after getting hammered 4-0 by the Sporks, also having defender Zach Loyd sent off. Graham Zusi returned to the starting lineup after missing some games with a concussion with a goal and 2 assists and Kansas are now tied for 3nd with Dallas in the west.

That’s behind Vancouver who beat Real Salt Lake 2-1 on the brand new BC Place turf, and the highlights of this are well worth checking out. Gershon Koffie put one in the top corner from 30 yards out in his 100th MLS game, then Javier Morales equalised with a bending free kick, again from 30 yards before Cristian Techera got the winner with the best of the lot. A harmless ball in the box was chested down by Elias Vazquez for Nick Rimando to pick up. Rimando hesitated and Techera nipped in between them to score. Comedy gold. Jeff Cassar wasn’t happy “Their second goal is another gifted goal. If you’re gifting goals in this league, it’s not going to be good. If teams are going to earn it, OK, hats off to them. But we can’t gift goals.”

Houston and New York City tied 1-1, Owen Coyle not happy with the penalty given to City for a handball, and New York now riding an 11 game winless run, with just 8 points from 13 games.

Columbus and Orlando tied 2-2, the Crew with 2 more goals from crosses, which has been very much their thing this year while Orlando got an 89th minute equaliser from Pedro Ribeiro. Crew had Michael Parkhurst sent off and also got 5 yellows and weren’t happy with Silviu Petrescu at all, Ethan Finley calling the refereeing ‘honestly absurd” and Gregg Berhalter saying the red card ruined the match.

Chicago hammered Montreal 3-0 at a very wet and rainy Toyota Park, Kennedy Igboananike getting his first goal for the club and Harry Shipp getting another very good goal, the goals of the week competition very much worthy of the name this week. When asked what went wrong with the defence, Frank Klopas said “We give up three goals, What do you want me to say? We were playing shorthanded for the whole game. The overall team performance was poor.”

Finally, the week ended with a rematch of last years final, LA Galaxy heading to to Foxy Foxborough, where heavy rain on the turf led to a chaotic game.  The first half ended 2-2, Diego Fagundez scoring a nice goal direct from a free kick, and both Jose Villareal and Jermaine Jones leaving with injuries.

There were no more goals in the 2nd half, but both Alan Gordon and Dan Gargan had to be subbed off with injuries. Arena complaining post game about the turf causing lots of injuries this year.

In other news, Orlando City are buying into the big crowds that their inaugural season’s producing and are upping capacity at their new ground from 19,000 to 25-28,000. No news on if there’s an increase in lion statues or not.