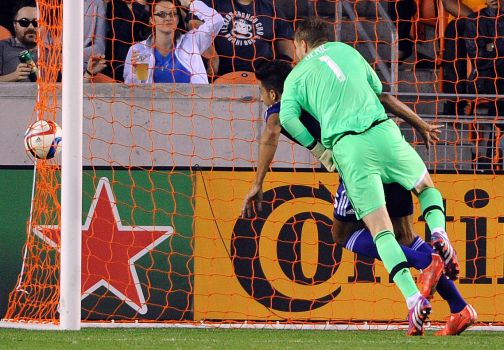 Want this in your ears, without all this reading and link clicking, but with a lot of interruptions and digressions? Sure you do. Then you should be listening to the Vocal Minority Podcast. This week’s episode will be out later this week, but for now, woof, just look at the archives.

Yes, last week was the opening weekend for the league, but this week, this week was when MLS really got it’s MLS on. Some entertaining matches, some high quality moments, plenty of sloppiness and some refereeing controversies. Everything you’d expect from a good MLS weekend.

It started with Houston taking on Orlando, and after a surprise and somewhat undeserved win over Columbus last week, Houston were once again pretty ineffective, 6 shots, 0 on target, against an expansion team. Last week their hero was goalie Tyler Deric, this week, not so much. He miscontrolled a backpass that allowed Pedro Ribeiro to block his clearance and as the ball bounced towards the goal, he basically bearhugged Ribeiro to the ground while simultaneously punching the ball into his own net. Top class stuff.  It finished 1-0 and that leaves Orlando joint top of the East with 4 points, even though they haven’t actually scored a goal of their own yet.  There was mild controversy when Kaka was subbed off in the 82nd minute, he didn’t look happy and took his captains armband to the bench with him. Adrian Heath  explained it thusly:  “I just thought we needed some fresh legs out there, but Ricky can be very pleased with his shift.” which is probably the faintest, most patronising praise ever given to Kaka.

The other team they’re joint top with, that’d be this week’s big winners New York City FC. 43, 507 saw them make their debut at what for some reason the commentators were calling ‘the house that Ruth built’. On the super narrow pitch it was a very eventful game, with David Villa looking fantastic and New York won 2-0. The Revolution missed a boatload of great chances, and haven’t scored in their opening games, now on 0 points and a -5 goal difference, bottom of the entire league.

The other big losers still with 0 points are Chicago who looked awful in losing to Vancouver, Sean Maloney certainly not living up to the world class label last week’s commentators bestowed on him.

The big winners in the West were FC Dallas who are the only team with maximum points after 2 games. They beat Sporting Kansas City 3-1, including one goal that had 4 or 5 players clearly offside but not given. Peter Vermes wasn’t happy, saying “How you can miss four or five guys being offside, I have no idea, I really don’t. I don’t get it.”

“It’s a difficult thing to swallow,” he said. “As I’ve said in the past, the problem is that you work with your team in the preseason, week after week, and you institute very specific situational training in regards to certain plays within a game. What transpires is that you go to your guys and you tell them to do this at this moment, and they do it.

“I have absolutely no understanding how the referee can’t see it – and with that many guys offside. That’s what I don’t get.”

Dom Dwyer later had a penalty saved to cap off the frustrating evening, The Sporks are now winless in 6 going back to last year and with only 1 point from their first 2 games, sit bottom of the western conference.

Surprise winners of the week were San Jose. They were riding a 16 game winless streak dating back to last season, into Seattle who looked really good last week, surely this would be a massacre. Seattle scored within 20 seconds, but then San Jose fought back with a lot of help from Sounders Captain and recently converted centre back Brad Evans who gifted two chances that Chris Wondolowski buried.  San Jose later had a player sent off, not much controvesy there after a clumsy Victor Bernardez challenge, but they survived to win 3-2. Monkey off their back, just in time for their first game at the new stadium next week. As for Evans, coach for the day Brian Schmetzer, filling in for Sigi Schmid who was off demolishing the buffet at his son’s wedding said when asked about maybe subbing him off “It did cross my mind to be honest with you, but you give veteran guys a little bit of leeway. … Brad is a great soccer player, and my gut said, ‘Let’s keep him in there.’”  I think that’s the problem, why Seattle lost, it’s one thing to try and fill Sigi Schmid’s shoes, and match his tactical mind, but if coaching Seattle is about using your gut, there’s no way you’re going to replace that.

The week ended with LA visiting Portland. Portland scored a gorgeous team goal, and looked to have won the game with a late goal from Fernando Adi just before the end of the 90 minutes. But, as Timber Joey was still busy sawing a log off, Alan Gordon scored in injury time. Almost as predictable a way of being denied a win as getting shut out by Nick Rimando the week before.  That’s now already 4 points dropped at home for Portland despite playing well, which has got to have them nervously thinking about last year’s terrible start.

I’ll end with the most entertaining game, as Real Salt lake and Philadelphia tied 3-3 in a game that really reached peak MLS status.  Javier Morales scored a nice free kick over a pretty shoddily constructed wall, Philly’s 3 goals came from a crazy deflection that Nick Rimando just stopped from being an own goal but allowed a simple header into an empty net for Fernando Aristiguieta, a foul throw, and then an actual own goal from Jamison Olave, after he’d previously scored the equaliser to bring it to 2-2. Entertaining, skillful, sloppy and weird, all we needed was controversy and up stepped the ref, calling a soft soft penalty for a ‘foul’ on Luke Mulholland. Mulholland’s comments:  “Was it a penalty?” “In my book, no. The defender caught me with a straight leg on my shin, knocked me off balance and I just tried to regain the ball again. Thought we won a corner or a throw-in or whatever, but the referee gave us a penalty. So, I’ll take that.” Philly manager Jim Curtin was a little bit less ‘c’est la vie’ about it. “I don’t think we get a lot of respect,” Curtin said. “I have a bunch of men on my team that fought hard and deserved three points tonight. I think they got let down at the end of the game.” The Sons of Ben took it a notch further, and with rather hilarious earnestness sent an open letter to Don Garber decrying the reffing standards and demanding some kind of acknowledgement. ” What are our expectations? We expect MLS to acknowledge, for the second straight week, that the officiating has cost our club, the Philadelphia Union, two points.  Our owners, coaches, players and fans deserve an apology. At this juncture, anything less than that is unacceptable. We look forward to your immediate response.” Adorable. I’m sure he’ll be right on that. Bravo MLS. Now you’re really back.

Edit: I’m disappointed in myself for missing this.  Kyle Bekker got on to the pitch for Dallas! Then he got angry