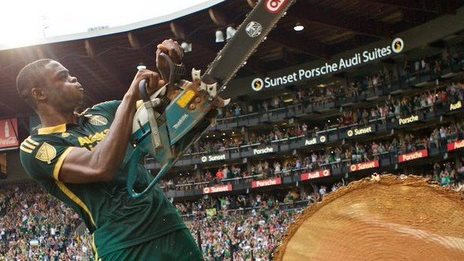 Picking up a chainsaw for your celebration? Not a yellow card apparently!

As always, get this review with the usual smart arse interruptions and the actual sound clips for the interviews (Sigi Schmid, so rude, always eating while he talks) by listening to this week’s Vocal Minority Podcast, out Wednesday some time.

Grrrrrrrr. This week was Heineken rivalry week in MLS. take away the lame, sponsored branding of it and I really like the basic idea of having a lot of derby games played on the same weekend and it definitely lived up to it’s potential this week.

There was the historic first ever ‘Heineken rivalry week New York New York game at Yankee stadium’ on Sunday, with Frank Lampard and Andrea Pirlo both in attendance, and the City fans greeting their opponents with a ‘Jersey Boys’ themed tifo. They went up 1-0 early on but then in the second half it was all red bulls, who ended up winning 3-1, their 2nd win of the week after a long losing streak, Matt Miazga celebrating his goal with a cheeky home run hitting celebration.

Good week for the red bulls, bad week for the Sounders, who lost in midweek and then on Sunday went to Portland for another Heineken rivalry week Cascadia derby game, greeted by a very elaborate ‘Timbers Wonderland’ tifo. 3 late goals from Portland, including 2 in a minute from Fanendo Adi who used Timber Joey’s chainsaw in his celebration, meant it ended 4-1, Seattle getting 0 points from the 3 games that modern day folk hero Clint Dempsey missed due to his suspension.  Sigi Schmid’s not happy with his team: “We just made silly errors at the end. We just weren’t alert enough. So they deserved to win. To me, the scoreline was a little bit deceiving. But it’s our fault. In this particular case, we didn’t have the character and we allowed ourselves to get deflated at 2-1.”

After 5 winless games on the road, FC Dallas returned home for their Heineken rivalry week game and beat Houston 2-0 to clinch El Capitan for another season. This was all about Fabian Castillo, Oscar Pareja saying: “I think we have to give the credit to Fabian, I don’t think it was weakness from the opposition. I thought it was something that is sometimes unstoppable. Fabian, when he takes people on, it’s dangerous. That’s what he is.”

The last of the Heineken rivalry week games was the Galaxy, freed from their awkward Chivas connection, and riding consecutive 5 goals games, versus San Jose. Juninho scored a cracker, but San Jose came back to win 3-1 and have now lost just one of their last 9 games, in Toronto. On top of that, they added Quincy Amarika in a TO reject for TO reject trade, sending Ty Harden to Chicago  LA slightly top that with the news that Steven Gerrard will officially be unveiled on July 4th, but still haven’t won on the road this season, and Bruce Arena was particularly grumpy post game, here’s a few verbatim quotes, entire answers he gave to various questions:

“We got out played.”

“Yeah, whatever. I’m not real thoughtful about that at the moment.”

“We were bad in the second half. What can you say? Whatever the reasons are. We got out played. Very poor performance on our part.”

“We were crappy. You can come up with all your theories but we stunk in the second half. You can use all your theories that you want. You have no clue; we just couldn’t do anything simple and right. From giving away the ball that led to their first goal, from that point on, we were no good.”

“They were alright. We stunk what can I say?

“We’ve only got ourselves to blame, and hopefully, this is a kick up the backside because maybe we were getting carried away with ourselves scoring a lot of goals. We just weren’t at the races tonight. It was a performance where were lacking a bit of oomph if you like”

In other dull, boring, unimportant non Heineken rivalry games, Vancouver are loving the World Cup, they’ve played 3 away games as BC Place is busy and won them all and are now 3 points clear at the top of the West. The latest win was 2-1 over the tea terrorists who hadn’t lost at home in 17 games, but have now lost 3 straight, Teal Bunbury’s quoting from the big book of happy clappy sports cliches though:“You can’t put your head down, and obviously guys are going to be disappointed now. Everybody here hates to lose, but everybody here wants to work for each other and wants the best for each other, and we are going to continue to have banter and we will continue to have fun and enjoy playing because at the end of the day we all love playing this sport and that’s what we have to continue to do. As soon as we start bickering at each other and getting down on each other, that is when things can get even worse.”

Jack Mack and Ernie all got revenge on the booing Philadelphia fans by scoring a goal in Montreal’s 2-2 tie there, and Columbus and RSL also tied 2-2, one of RSL’s goals coming from a fancy free kick routine that worked to perfection despite including a Joao Plata header in it.

Finally Kristian Nemeth got his 7th shot on goal of the season. Big deal, but also his 7th goal, which is a record and that helped the Sporks beat Colorado 2-0, along with a Sam Cronin own goal. That leaves Colorado bottom of the west with only 12 goals from 17 games, and they’re getting frustrated, Luis Solignac saying “It seems like everything is against us right now. We’re trying so hard; fighting, shooting, doing everything. It seems like nothing will go in. We’re really frustrated.”

Add in Atlanta announcing their name as the very uninspired Atlanta United FC (AUFC, sound it out, aw fuck. excellent. Supporters Group? The A.U.Guys) and that’s your MLS Wins and Losses for the week.