Posted By Kristin Knowles on Jan 7, 2015 in News, Uncategorized | 8 comments 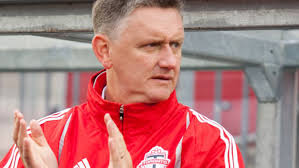 A round of applause indeed.

Another prodigal son has returned home.  In a somewhat surprising move, Toronto FC announced yesterday that former Academy director Stuart Neely was back in the fold.  Neely returns to coach the Senior Academy team and assist Jason Bent in coaching TFC’s USL Pro side after leaving the team three years ago.  Considering the circumstances under which Neely left – he resigned/was fired/was pushed out to make way for Thomas Rongen as part of that whole Aron Winter thing –  his return has to be seen as a positive sign for TFC’s reputation; that perhaps the damage done throughout many local football circles is slowly being repaired.  Many would look at the DeRo signing as the first indicator of this and certainly that was a surprise last season – although it remains to be seen how successful that move has been –  however Neely’s departure in 2011 did a lot of damage within the local community, much of which still resonates today.

Neely first joined Toronto FC back in 2008 as Director of the new academy and coach of the Jr team.  Three years later he would leave under acrimonious circumstances and join the Vancouver Whitecaps as head of their player development before joining New Zealand (another Ryan Nelsen connection? Nah…) Football as their head of development.  However it’s Neely’s pre-Academy days that made (and make) him such a valuable addition as past roles with the OSA and the CSA – both in player development roles – were and are valuable connections to be harnessed by Toronto FC if they are serious about building from within and helping to grow Canadian soccer.

He also responded – or so it seemed – to every single person that tweeted congratulations to him for his return, going far above and beyond what mere optics or being a good soldier would dictate.

He genuinely appears to be looking forward to his new position and contributing to TFC’s future; so refreshing to see this level of positivity and yes, a bridge rebuilt.  It feels odd to be talking about Toronto FC in a positive manner (cynicism is hard to leave at the door with TFC), but there is everything to like about him coming back to Toronto FC in general, but more specifically to the Academy.  His long history in player development but also his connections to Ontario and Canadian soccer circles cannot be underscored enough as TFC seek to build from within – Neely working with both the Academy and Bent on the USL Pro team should be steps in the right direction.  Welcome back Stuart – you know the nightmare that you left, hopefully this time around things go much smoother.