Posted By Duncan Fletcher on Jan 7, 2015 in News, Uncategorized | 1 comment 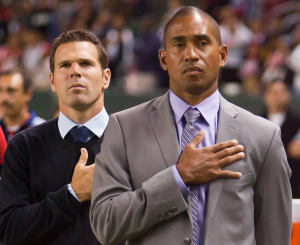 Do you solemnly swear to work well together and not backstab each other until one of you needs to be replaced?

Big day yesterday in TFC world. We got the actual news of Stuart Neely returning to the club in the academy, which is a good sign of things improving, though not something that will have an immediate impact. There was also rumours of the club going after Damien Perquis, which may or may not happen, and may or may not be a good thing if it does, but hey, rumours are fun.

But probably the biggest news was an as yet unconfirmed report of a change that could well have an immediate impact on the first team, and looks to be a very positive move. Kristian Dyer of Big Apple Soccer.com reported that New York Red Bulls assistant coach Robin Fraser was set to leave the club and join Toronto on a 3 year term.

EDIT:  as per this article, published Wednesday January 7….”Toronto FC announced Thursday that the club has hired Robin Fraser as an assistant coach.”

Getting one cynical argument out of the way early, yes this is the Robin Fraser that was the head coach at Chivas USA the same time Greg Vanney was the assistant, so it is just one more nepotistic piece of that Chivas gang being brought back together, which surely can’t sound like a good idea.  To which I’ll somewhat agree but let’s face it, coaches hiring people they know and trust and know they can work with is something that happens everywhere in every sport. Also, it would be really unfair to hold failure at Chivas against anyone, it really would.

Getting beyond that argument, is Fraser a good hire? Yes, absolutely. The lack of experience in Ryan Nelsen’s assistant coach team last season was only beaten by the lack of experience in Greg Vanney’s, Fraser helps that a lot.  Aside from, and more impressive than his time as head coach at Chivas, he also spent 3 years as assistant to Jason Kreis at Real Salt Lake, a time that saw them dramatically improve from struggling expansion team to MLS Cup winning, consistently good MLS team. After his time at Chivas he’s spent the last 2 years in New Jersey under Mike Petke, a time that saw a historically underachieving team win it’s first ever trophy in the 2013 Supporters Shield and then almost make the MLS Cup final in 2014.

From the sounds of it, Fraser wasn’t just those teams versions of Jimmy B, but instead was a huge influence on the tactical behind the scenes stuff, as mentioned for example here, or in this tweet from a Soccer by Ives reporter.

As if having to come up with a style without Henry wasn’t hard enough, Petke might now have to do so without the brains of his operation.

So there’s 2 different bits of history that show what he can do, which is flourish as the brains behind an inexperienced coach who has the personality and connection to a club to be the inspirational leader. Obviously that might well be where this plan falls down a bit as Greg Vanney has no real long connection with TFC as Kreis and Petke did at their respective clubs, and judging harshly by what we saw last season seems to be about as inspirational as a dead fish.

Also, of course this is TFC, and there’s no-one better at taking a few seperate good things, players, coaches etc, and dicking them around within their corporate culture until they’re massively less than the sum of their parts  They’re the opposite of the feel good movie about a ragtag bunch of misfits coming together and achieving the impossible.

Also, there’s the obvious appearance that this is TFC putting into place their next plan B if Vanney fails. Not necessarily a bad thing but something that in the past has seemed to lead to conflicts necessitating that plan B conveniently becomes plan A, ie Mariner replacing Winter, Vanney replacing Nelsen. The one way that this hire is different though is that Vanney knows Fraser, has worked with him, and was thus involved in his hiring, so hopefully they’ll work much better together, and for the common good rather than their own ambitions.

History suggest we should be wary, and we won’t know for a while if the usual dysfunction will rear it’s head, but for now that’s besides the point. We’ve added someone with a good track record of success as an assistant, as a tactics guy, and that’s actually the job he’s apparently being hired to do, so there’s no way this can’t be seen as good news. The staff behind Greg vanney will be undeniably better that it was 2015 is off to an unsettlingly good start with the managerial/coaching stuff.