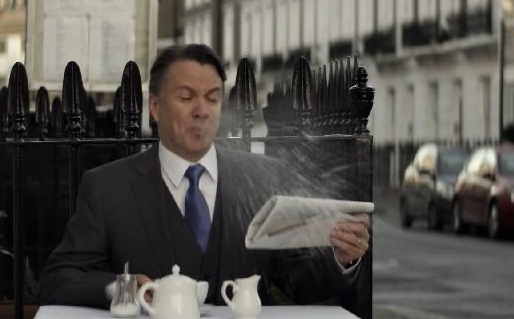 And it’s getting more and more absurd.

Why can’t we talk it over?

Oh it seems to me

That sorry seems to be the hardest word.

Just when you thought it was safe to thread again; the red thread that was meant to connect us all under Kevin Payne is back. No word on the fate of those inukshuks. This time around however, the now “frayed” thread is the last bit of rope as football’s eternal almost-apologists hang on the edge of a promotional precipice.

As most of you have seen by now, Toronto FC’s pre-season advertising campaign was released this week and from a pure strategic marketing angle, it is a patronizing piece of brilliance that deserves accolade. Again, that’s from a demographic-strengthening, market-share point of view. A year on from the bold, brash “why can’t we be great” bloody big campaign, TFC has gone into a prone “we’re sorry (sorta)” position towards their long-suffering supporters.

From the adoption of the John Newman song “Love Me Again” – an ode to jilted lovers everywhere; already used by other sports teams who failed to deliver (see: Toronto Blue Jays) – to the latest television spot, The Reds have gone into full mea culpa mode. Well, almost.

You see, the genius of the ad is that the club has galvanized their fanbase against a common foe – or Defoe as it were. It took a particularly evil genius marketing-type to turn the lights off the double-decker bus then namelessly drive it back and forth over the departed striker. Throw in the derisive head-shaking of stationary bike enthusiast/ new captain Michael Bradley, cast as the hard-working anti-Defoe, and you’ve got movie magic.  Churlish? A touch. Effective? Absolutely.

This part of the campaign is of course the giant TFC asterisk. “We are (kinda, sorta, maybe) sorry guys, but you see – it wasn’t really all our fault – it was that greedy meanie from England who done us – and you – wrong! Forgive us – even though it wasn’t really us.” Brilliant. It’s not hard to eat up. The sour taste over Defoe’s departure (admittedly in my own mouth as well) makes any TFC fan desperate for a 2014 mouthwash and this is what this campaign promises. Just ignore the part about the club failing to do their due diligence about Defoe’s personality last year because this time they got it right.

Admitting of course that the infamous red thread has indeed been frayed is a decent naval-gazing first step. Despite deflecting some of the fault on the departed London-lothario Defoe, taking part of the blame and having the self-awareness to understand things haven’t been sunshine and rainbows at BMO Field is a positive. Of course this isn’t TFC’s first foray into apologetic damage-control. The club still hasn’t been able to raise ticket prices in a meaningful way since the shocking “2007 rollback” price slash of a few seasons ago. That move was an absolute necessity in one of the club’s darkest hours, and while this latest campaign isn’t quite as costly, it may be the last gasp at retaining the trust of long-term supporters. The problem arises when and if this season is yet another false dawn.

So what happens if this club, that still has a lot of question marks hanging over its head, fails to deliver in 2015? The club surely couldn’t try to sell you on another year of extended devotion simply by apologizing again. Even if one of the current “real men” DP’s were to follow a Defoe-esque path, throwing another player under the bus to preserve the club’s image wouldn’t be swallowed by even the most rose-coloured of TFC optimists. This is it for the marketing department really, they have played their final apology and any more will be met by large numbers with the welcome offered to the boy who cried wolf.

From the club-selling standpoint, winning this year (on the pitch – not off) is crucial. The next off-season won’t be an easy sell. By then TFC fans will have awoken to the cold, hard fact that BMO Field is now home to the Toronto Argonauts and their many pounds of grass-destroying players. Some fans will buy into 2016 in the far-fetched hope that TFC will spend their way out of having a pitch that is eaten alive after the first week of CFL-sharing, but that is unlikely and many know this. If TFC does not manage to win in 2015 then all of the “sorrys” an advertising firm can twist may not be enough for some who will pre-emptively remove themselves  (and their eyes), from having to see the inevitable football on gridiron lines. Selling a floppy canopy and new bathrooms won’t mask this.

Winning solves a lot of problems, but TFC has never been able to offer that as a solution. The Reds are of course the masters of sizzle over steak; and are the champions of many an off-season, but the Apology Cup hath runneth dry. The ad campaign, as with much fluff, is overall a harmless bit of a sideshow in the grand scheme of things, but looking ahead to how this club may or may not be able to sell itself in the future is interesting.

“Sorry-ish” is a nice and welcomed touch to people who deserve many apologies but as quickly as it’s out there, it’s also done. The time for sorry ends on March 7th and from that point on it’s “just win, baby!” If the frayed red threads aren’t reinforced with the stitching that only wins can bring – marketing this team a year from now will be a tough task with little inspiration to draw from.

Without the bare minimum of a playoff appearance – and possibly more in many eyes – TFC will go from the ones handing out half-hearted apologies to receiving them. As in “I’m sorry but I won’t be renewing my season tickets.” The only difference will be when those people say “it’s not me, it’s you” – it will be the truth.