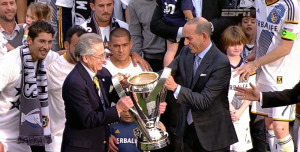 Don Garber handing the MLS Cup to not a player

Only in North America can you have a summer game’s title match in December. Thankfully, or unfortunately (depending in your levels of schadenfreude), that game is taking place in Los Angeles. Today, the MLS Cup final pits New England against the Galaxy and I almost don’t care except I openly hopped on the Lee Nguyen bandwagon and would like him to win. Also, the Landon Donovan narrative is annoying, tired and overblown. I’m still predicting his heel return to footie when he joins the new Spartak Los Angeles Wanderers Town.

New England have caught absolute fire since August and or since the blind draw that stole Jermaine Jones from Chicago and placed him in Foxborough. They’re playing some nice footy and the goals are coming from everywhere. Including the boot of son of Canadian legend Alex Bunbury. He’s upsettingly became lethal in the post season. Fuck that guy.

45′ – YELLOW – Donovan goes into a tackle and nails Sardes in the back with a knee.

Half Time mood : poor finishing but back and forth. Not bad.

50′ – in a no-Nguyen situation (you’re welcome) , Lee is in front of goal and gets hauled down in the box to no call. Hard to tell if he had a legit claim.

51′ – GOAL – Zardes takes a cross, side steps a tackle at the right post then buries it
GALAXY 1, REVOLUTION 0

79′ – GOAL – Mullins cuts a deep ball back into the box, Tierney beats a defender and nutmegs the keeper. Game on.
GALAXY 1, REVOLUTION 1

90′ – SUB – Gordon and Gargan in for… Someone. Doesn’t matter. Now there’s two ex-TFC players in the game.

92′ – YELLOW – Keane booked for a tackle from behind on Jones.

110 – GOAL – Keane wide open for a looping ball over the top, no one marking him, slips it past Shuttleworth
GALAXY 2, REVOLUTION 1

120+3 – Jay Heaps goes in to try and save a goal kick and collides with the keeper. Then while the keeper fakes it up on the goal line, Heaps picks up the injured keeper to get him to his feet, then pushes him over front ways. Classic stuff. No PickleSlam, but I love it.

Man of the Match : Keane was fun, if only for his over-exuberance

Goat of the Game : the narratives.

If you PVR’d It : start at the beginning of the second half and let it roll

The game was far from terrible, but far from great.  The second half did open up a bit more and New England were let off from a few defensive gaffes by near misses.  The right team won the cup, as in effort on the pitch.  Genuinely disappointed for New England’s loss but revel that the son of a Canadian Legend didn’t win so there’s that conundrum.

MLS is far from a perfect league.  Forget promotion and relegation dreams.  Toss away multi-million dollar transfers targets.  I’m not even suggesting that the owner’s puppet, Garber, is the problem because someone has to be the target of supporter ire.  My problem is the contrasting messages of what the league wants and they ideals that they refuse to move from.  It’s much like having your boss giving you a deadline of tomorrow on a brand new 2 week minimum project because they screwed up.  You cannot have it both ways, but someone has to try.  We want to foster fan support at local levels yet scratch their head why next to no one in San Antonio watched it.  Because tribalism isn’t inclusionism.  Because civic pride only extends as far as regionalism allows.  Because it is tough enough to endure the local poo-show without wondering what everyone else is up to* (unique Toronto problem)

MLS’ appeal, for me, is the supporters culture.  It’s the fostering of tribalism.  It’s the us-against-the-world attitude “ultras”.  It’s the flares, the scarves, the songs, the tifos, it’s the sense of belonging to something unique in sport.  Well, English North America, anyways.  When the game is on, standing at the stadium, I get to forget that this ‘soccer’ isn’t the ‘football’ I hope for, because it looks the same.  In the throes of singing, yelling, waving, jumping, it feels authentic enough.

If I was a supporter, being cultivated to feel a sense of belonging, correlating pride with love of soccer to elicit that “this is my team, this is my city, so I must love my team and my city” sensation, and my team and my city just won the league’s championship, then I want to see the leader on the pitch to be the first to receive the championship trophy.

I’ll happily overlook that the cup is named after a living person, as cheesy and ass-kissey as it is (I’m fully aware that he owned most of the league at one point and saved the league from failure), but there aren’t many fans excited by seeing an owner receive the cup, only to pass it on to the player.  I never want to see a suit lift the sporting trophy.  If the owner’s ego is that big, why own a sports team at all.  Take out an advertisement.  Start your own TV show.  But jumping in front of the people your customers paid to see because of entitlement?  Tasteless.  It’s hard for true fans to say to casuals “give it another chance” when you struggle to find reasons enough to like it.

MLS wants all the spectacle and passion of worldwide club soccer yet can’t understand why it can’t even capture the imagination of most soccer fans domestically.  Maybe it is the lack of connection with their communities (fun fact, Los Angeles plays not in Los Angeles, but in Carson? How about Carson Galaxy?). Perhaps it’s the attempts to squash crowd reactions to goal kicks from the front office? Or maybe, you just handed the prize possession that every player who fights for it to someone who doesn’t play.

If you can’t even mimmick the little obvious things, then good luck with that.