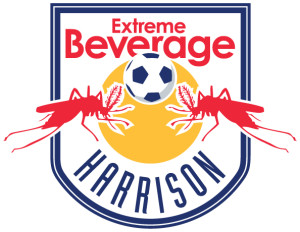 The Part I Write Before The Match :
South Couch again? Yeah, there are reasons, they should be overcomeable but for whatever reason, I seem to have lost the idea that going down to BMO Field rather than watching on tv is something that I HAVE to do. Shocking drop off in standards, or welcome sign of growing maturity? Who knows?

Anyway, the game. The first leg, despite not being entertaining enough for Damien Cox, was a good performance by TFC, very smart tactics carried out very well, at least when they had 11 fit players out there. And the win, and the 2 away goals is a hell of a result to come away with.

This is by no means a foregone conclusion, New Jersey remain a dangerous team, and they’ll cause problems for TFC again, as they did in the first leg and the league game a few weeks back where TFC eventually won 4-2, but it was very dodgy for a while. With a bit of luck, or better finishing, there are definitely goals in this for the red bulls, I’ll predict that our eff cees will have to score at least once if they want to advance.

The good news is that the injury concerns came to nothing and both Drew Moor and Victor Vazquez are fit and in the starting lineup, which is exactly the same as last week. Other good news for those that actually went, it’s warm as advertised, but not rainy and thundery as advertised, let’s hope that holds up.

Second verse, same as the first

and here’s the red bulls lineup

10′ – Strong start from the red bulls without anything dangerous really coming from it.  First decent chance for TFC, Altidore down right, show low to the far post, rolled just wide.

13′ – Vazquez cross, low across the face of goal, almost falls to Giovinco, but Lawrence just gets a touch to knock it away.

15′ – TFC try a quick free kick, Altidore runs right into the elbow of Long, and is down holding his face for quite a while.

23′ – Some nice passing gets Giovinco into the box, where he goes shoulder to shoulder with some defender and gets knocked over, but no penalty given.

Yellow cards: 33′ – Giovinco and Adams clash, Seba gets up as if he’s going to confront him. Altidore barrels in and separates them (saving Seba from suspension?)  and spends a long time arguing with Adams, then gets into it with Klejstan, who pushes him over, though Altidore drops easily. Only a yellow for Klejstan, and one for Altidore as well. They continue bickering, Klejstan accusing Altidore of diving.  Fun.

45′ – Some fucking lovely passing from Vazquez and Giovinco sets Seba running in to the box, he runs a bit too close to Robles, then pokes the ball past him and just wide of the far post.  Then Altidore gets tripped just outside the box, ref decides it’s not a foul.  He’s very floppy today is Jozy.

45+2′ – After a bit of Jersey pressure, TFC break through Delgado down the right, with Seba in a lot of space down the left. The ball doesn’t get passed to Seba, who is very much not happy about that fact. Anyway, it’s half time.

Yellow Card: Michael Bradley does some concentrated yelling at the ref as the teams walk off, gets a yellow card for his troubles.

Halftime mood:  Scrappy first half, lot of dullness, bits of feistiness, ref with a fairly high bar for what’s considered a foul. It’s not ridiculous, but TFC not all that happy with it.  More discipline in 2nd half please. Jersey having most of the play, and Drew Moor not looking all that comfortable again, but most good chances have gone Toronto’s way. Anyway, 0-0 is just fine right now, Jersey’s going to have to get more desperate and you’d think that’s lead to counter attack opportunities.  Reports of tunnel scuffling at half time. Vanney and Marsch having to be pulled apart. Putting on a show for the tunnel club!

And the TV shows it’s raining at BMO Field. Justification!

Red Cards: Altidore and Klejstan both sent off at half time.  For violent conduct in the tunnel. So that’s 10 v 10 today, and Altidore suspended for 1st leg v Columbus.

52 – Giovinco, all alone up front, gets the ball about 40 yards out and decides fuck it, there’s no one else I’m just going to shoot from here. It doesn’t go well.

Goal 54′ – Royer takes a shot from about 50 yards out. Harmless, but just outside the box it hits Wright Phillips, and deflects over to the other post, past Bono and in. Toronto 1:0 Jersey. 2:2 aggregate

Sub 55′ – Hagglund in for Mavinga who picked up a knock at some point apparently.

62′ Wright Phillips gets in behind the defence, gets a shot off, Bono had come out to meet him and managed to block it with his foot. Huge stop. This isn’t looking good at all right now.

Subs: 63 – Hasler for Beitashour. Also Davis on for Murillo.

Sub: 66′ – Osorio on for Zavaleta, moving to 4 in midfield, trying to get a bit of control back into the game.

Yellow Card: 70′ – Wright Phillips goes up for a header with Drew Moor, and absolutely flattens him, including an elbow to the face. Only yellow though.

72′ Vazquez gets into it with Adams now after a foul. What the fuck TFC? Calm the fuck down. Aren’t they/Bradley supposed to be all composed and determined and leadershippy? Nothing comes from the free kick.

77′ Seba flops, doesn’t fool ref, then Hagglund fouls Veron, who makes a big meal of it, much to Vanney’s disgust from the bench.

78′ Giovinco gets a chance, dribbles, then puts a cross to the back post, Osorio and Adams go up for it, the ball bobbles into the net off Adams, the post and Robles, but ref calls a very very very soft foul on Osorio. Crowd getting righteously angry with a ‘ref you suck’ chant. Now TSN tells us it was actually for offside, replays show it doesn’t really look offside at all.

80′- Seba goes down, ref doesn’t call foul. Giovinco then gets himself a yellow for dissent, so he’ll be suspended IF we get to the next round. Crap gets thrown at the ref from the crowd.

82′ -Seba, getting a lot more space now as red bulls push up more, goes down, ref calls a foul. Crowd gives huge ironic cheer. 30 yards out, very similar to position he scored against Atlanta, but instead Vazquez take it and floats one in to the back post, but it’s over everyone and straight out.

88′ – Lovely play from Vazquez. Seba dives again and is again ignored by the ref.

Yellow Card: 90′ – TFC playing keepaway by the corner flag, and Seba wins a free kick. Vazquez takes it quick, and scores. Ref calls it back as taken too quick. Vazquez not happy at all, barges into the ref, gets right into his face, Bradley also gets in there but they manage to avoid yellows somehow. Felipe gets one though. Some lovely play, and then TFC win another free kick.

One last attack for red bulls, TFC clear then win another free kick. Down the other end, TFC may have got a penalty but didn’t, but hey, it’s full time. TFC survive.

Full Time: Toronto 0:1 Jersey Aggreagte 2:2, TFC wins on away goals.  Well, that escalated quickly. Commentators were saying that Jesse Marsch wanted the red bulls to make it chaotic and throw TFC off their game.  Not a terrible strategy when you’r playing a better team, and fuck, they certainly did that. What a shitshow of a game that was, especially half time and the 2nd half. The overall winners might well be Columbus who now get to play TFC without Altidore or Giovinco, and with Bradley and probably some others on one yellow card.  Wasn’t pretty (what will Damien Cox think?) at all and for a good portion of that 2nd half after the goal, I’d have put money on jersey scoring again, Bono’s  save was huge, and then after that, despite the effort and the scrappiness, Jersey didn’t really have more good chances, and eventually TFC got control back for the last 10 minutes or so, Osorio was good for that.

Now to go look at the stats as I’m sure I missed some bookings in all that (I didn’t!)

Man of the Match : Too scrappy for anyone to really stand out, I’ll give it to Bono. If Frei can win mls cup mvp for one save, so can Bono. .

Goat of the Game : Altidore was super floppy, super chippy and got himself sent off and suspended. I know everyone’s supposed to be nice to Jozy right now, but nope. Dumbass.

Ref Rating : 3 out of 5.  He was absolutely in the middle of everything, but I have a hard time blaming him, the players were absolutely asking for cards, and I’ve no problem with all the flops and dives he didn’t call fouls on.

I Am Not The Gaffer, But… : Can’t complain about the starting lineup, and the game was just too messy to really try and read tactics into it. Could he have kept his cool more, and got the players to keep their cool more. You’d hope so. But all in all, over two ugly intense games, just about got the job done against a very dangerous opponent.

In Case You PVR’d It : Watch the whole thing, not for an exciting exhibition but for the tension and the feistiness and the slow meltdown into chaos. Fascinating stuff really.