Home » Analysis & Opinion » Strike? Will The Players Be Walking The Picket Line Or Kicking A Ball In Two Days?

Strike? Will The Players Be Walking The Picket Line Or Kicking A Ball In Two Days? 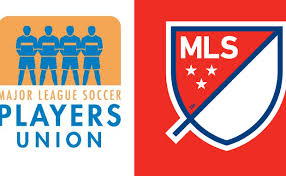 So close and yet so far.  The 2015 MLS season is supposed to start on Friday and yet, with each passing minute the probability of that happening seems to get further away.  Will the season start on time?

The collective bargaining agreement between the league and the players union ended at the conclusion of the 2014 season and as the months have gone on we’ve come to this point; where we’re days away from the season starting and no clear idea as to what’s going to happen.   If you spend any time at all on social media you know how quickly the mood has been shifting – literally 180 degree changes from hour to hour on the progress and outcome of the talks.  Earlier this morning things were bleak; this evening, things may be looking up!  On the positive is that players for the teams playing on Friday have left to join their teams and the Chicago Fire flew out today as scheduled.  Not so positive – they’re still negotiating.  *We don’t even know if they’ve voted on anything yet.

Now none of this is at all surprising; labour negotiations are fractious, tiring, often irrational and drawn out things. There’s rarely any ease to them as emotion cannot be removed from the equation – because people are involved and so too are their lives. Of course we can look at the numbers and issues being thrown about and scoff because for the most part none of those have any part in the reality that most of us live.  No one is going to give us millions of dollars a year to do our job, or let us choose where we want to work after a certain number of years.  But that is the nature of sports contracts and we have to step back from it and look at it as a separate world.  And in that world there are issues.

Free Agency is what has been thrown about the most during the negotiations – being a single entity league where the players are actually owned by the league and not the teams, free agency is something that’s been stayed far away from.  But it’s been 20 years and things change – things should change – and as the league grows and improves the players can’t help but want a little more security as is given in other leagues (soccer and other) around the world as well as North America.  I’m not going to get into the numbers because again, they change constantly.  If you want to stay up to the minute there’s a plethora of people to follow: @aaronstol, @SoccerInsider, @YesThatBrooke, @sgevans, @LWOSAlec, @24thminute and @JeffreyCarlisle (I know I’m missing many others) but these guys have been on the scene, often late into the night, trying to keep us up to date.  They are your best resource, along with the rolling update from @thegoalkeeper to stay up to the minute about the latest rumoured offers about the free agency terms.

But free agency isn’t the only issue on the table; it may be the sexiest and getting most of the attention but the wage disparity between the lower tier of players and the middle tier (the DPs and such can almost be removed from this), is something that gets more problematic as the years pass.  We’ve all heard the stories of younger players, less well regarded players, bench guys etc, taking food home from training in order to have money for rent.  Seriously.  I know more than one of us have looked at the salary list and realised that we make more than a fair number of players.  We called him poor Mark Bloom for a reason….Regardless, a raising of the minimum pay will not only give some of the young guys living in big (and expensive) cities a better wage but also means that they don’t start looking elsewhere to get a paycheque; paying them more is healthy for the league.

Ultimately that’s what all of this should be about; the health and growth of the league.  The league and the owners resisting any and all change is foolish and will eventually do harm to the league’s progression but also to its desire to be a top league within the next decade.  Taylor Twellman really nails it here:

Other things putting pressure on the league to make a deal – because it is the players that are going to walk, the owners have shown no sign of locking them out, at least not yet – include the success of the Montreal Impact and DC United in the Concacaf Champions League, the two newest franchises that don’t want to lose out on ‘new team buzz’ and high profile players both current and former (thanks LD), speaking out to get the deal done.

Should a deal fail to get done tonight or tomorrow, should the players strike?  And if they do will it have a lasting effect on the season and the fans and their attendance?  Personally I’m firmly in the corner of the Players’ Union – they’re not asking for outrageous things and I think it’s important that they get some measure of concessions that will improve things for all levels of players.   Do I hope that they get it done and still play this weekend?  Of course I do, I’ve been dying to see my team in action as well as the other MLS teams finally play after what has felt like a really long off season.

But what if they do strike?  Will it affect my attendance?  No.  And doubtful that it will affect the attendance of the other core fans that have been with their teams since the beginning; those of us that reup for our tickets every year, even if our team has yet to taste any kind of success – sorry, digressing.  A long term strike will affect the casuals though; those fans that the league and the owners covet and want to convert to season seat holders will not return as easily.  And that is hopefully uppermost in the minds of the owners as well as the players.  The former as a reminder of what they could lose immediately, nevermind the long term; and the latter as a point on which to hang their negotiations.

There is much to lose in this CBA, but so much to gain.  I plan to be watching Toronto FC this Saturday with the VMP crew; but if I can’t I won’t begrudge the players and hopefully neither will you.  Will you return if the players strike?  Let us know in the comments.

*As this was being posted it seems that the players are indeed voting on an offer – fingers crossed people!*