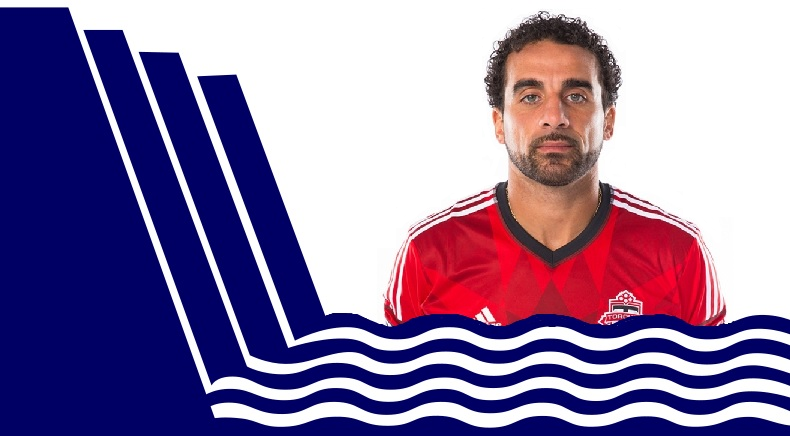 – The National Anthem of Scarborough

The long and winding road back to Scarborough (Toronto’s eastern inner suburb for our international readers) has finally come to its final curve. While the sun never sets on The 416’s righteous right-side, dusk has fallen on the storied career of the hood’s native son and one of Canada’s greatest all-time footballers, Dwayne De Rosario. Love him or hate him, and we know there are both ’round these parts, you have to respect the mark that De Ro has left on North American and in particular Canadian football.

Despite two stops playing for his hometown MLS side – Toronto FC – De Ro never managed to find the elusive success that many at BMO Field have sought. After championships with San Jose and Houston, De Ro’s homecoming was supposed to herald the same for The Reds but a whole wad of ineptitudes on the club’s part – and some wounded pride on De Ro’s part – never allowed this to come to fruition. Either way, bygones have indeed become bygones and the club is set to say goodbye to its one-time talisman with a first-ever Testimonial Match on Saturday.

For reasons we’re not too sure of, the match will be played at 3PM (a whopping 4 hours before kickoff of TFC v NYCFC) so attendance will be a challenge but there are good reasons to show up early. A host of ex-TFC players will take part alongside an array of De Ro’s personal selections. Also: a reality TV star. While the match will mostly be a glorified kickabout/skills competition for the over-35 set, The Vocal Minority wouldn’t be doing our job if we didn’t give you a scouting report on the announced squad…

DAVID MONSALVE: The ex-TFC goalkeeper and North York native comes back to where it all started before bigger and better things in er… North York, Edmonton, Finland and Colombia’s B League. May suffer from onset BMO Field PTSD.

PAUL DOLAN: “Dolie The Goalie” will be keen to show his ex-teammate De Ro he can still make those acrobatic saves he was once famous for. Will be accepting donations for a new hip post-match.

KENNY STAMATOPOLOUS: Opa! The Vocal Minority’s Duncan Fletcher’s favourite Canadian ‘keeper is sure to keep things safe in the back.

ROBBIE ARISTODEMO: Etobicoke-native and former Toronto Lynx midfielder Aristodemo has an incredible 70 career goals… indoor. So watch out for Robbie if it rains and the match is played in the Tunnel Club.

DANLEY JOHNSON: An original member of the Toronto Lynx. At 36 years old will be one of the youth members of the team.

DARRYL GOMEZ: Former Saint Kitts and Nevis International (!!!) who has seemingly played for every semi-pro Toronto-area team ever. Likely to leave with a TFC contract.

LYNDON HOOPER: Veteran Canadian International Hooper will bring tons of experience to the squad… and hopefully a full bag of Aleve pills and Voltaren gel.

RICK TITUS: TFC folk legend promises to have one of his best-ever appearances on the BMO Field pitch. Potential MVP.

JON CONWAY: Before there was a Kaveman Konopka at TFC there was King Kongway. One-time giant of the BMO Field goal and current Reds’ goalkeeping coach, he will most probably win the prestigious “Player Most Likely To Join Nickleback” trophy.

TOSAINT RICKETTS: Not the Ricketts we were expecting at this thing.

ADRIAN SERIOUX: One of our all-time favourite TFC defenders and another Scronx-native, Serioux brings some much-needed red-card potential to the match. Sadly, the rumoured David Beckham appearance never materialized.

SIMEON JACKSON: The one-time rising star of the Canadian program will leave many in the stands asking “How do we not have him here instead of Luke Moore?”

JULIAN DE GUZMAN: Oh the irony! The man who got the DP contract that De Ro had been Mo-promised rolls the Lambo through The Ex once again for his fellow Scarberian’s send-off. Handy for bail if the after-party gets out of hand.

DAVID EDGAR: Can he just sign here once and for all? We all know it’s going to happen one day in some over-priced contract. Do we have to wait til he’s 33?

JAIME MORENO: Is it wrong to boo a guy at a Testimonial? The MLS’ Bolivian legend brings some Major League star power to the match. We still don’t have to like him.

PAUL STALTERI: One of your London EPL club’s two all-time Canadians finally trots onto the BMO Field grass as a player. Always expected him to follow Jim Brennan here at some point but the closest we got was his looky-likey Logan Emory.

JUNIOR HOILETT: Hey remember this guy? The can’t miss prospect too big for Canada is back – this time in meaningless match form! Not much to do while QPR desperately tries to unload your fat contract, eh Junior?

ALI GERBA: Serious disappointment. Listen… if you’re gonna ask one of TFC’s two famous fat dudes to a match you gotta go with Collin Samuel. The shirt should be fun though.

AMADO GUEVARA: Alright! Now we’re cooking with dodgy Central American gasoline! “El Lobo” returns to BMO Field where fans will finally get the chance to give him the send-off Preki took away from us. He may have had the tendency to disappear in matches from time to time but the former Pro Honduran basketball star is one from the “good ol’ days”. We expect 10 goals.

KEI KAMARA: Is it too late to write in a new MLS rule that if a player plays in a Testimonial Match he then becomes property of that city’s club? Sounds legit.

JUAN PABLO GALAVIS: We have no idea what the connection between this Venezuelan football journeyman-turned-The Bachelor and De Ro is but we will not be giving him a halftime rose. May ask for Jon Conway’s hand in marriage at the after party.

BRIAN CHING: Again, is it wrong to boo? This guy hurt TFC so many times over the years but I guess Testimonials are like Hollywood Roasts – you do one and you have to do them all. Will score in the 89th minute.

DANNY KOEVERMANS: Mamas lock up your pancakes – Koef is back! The big man returns to the site of his late-career heroics which were sadly stunted by injury. Raise your hand if you really want him to call this “probably the worst Testimonial Match in the world”.

DANNY DICHIO: Aside from the guest of honour – this is the man the fans will come to see. Legend of all TFC legends, we all want to see Danny score one more at BMO Field. Anyone who didn’t toss their seat cushion back in 2007 – do the right thing and bring it on Saturday.

And of course, last but not least – the man himself- De Ro.  Our dream is that he wears wigs to represent all of his former hairstyles during the match but most of us – especially those of us under the Scarberian influence – will be happy to see him Shake ‘N Bake one last time. Yes, De Ro polarized opinion in TFC circles but suck it up and say goodbye to the kind of Canadian player that will only come around once a generation. Good, bad or ugly – admit it – you couldn’t take your eye off him.