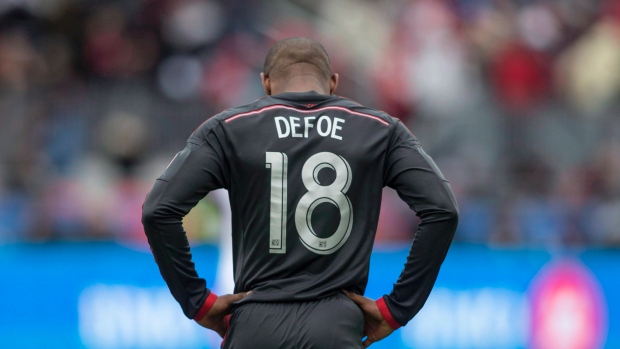 So it’s official.  Well almost official – Toronto FC and Sunderland have yet to make official statements but from TSN’s report last night (and other subsequent reports), Defoe is out the door and trading one black cat for another.   The question of whether or not Jozy Altidore comes here is just an MLS rule bend away and TFC appear to have recouped the money (and maybe more) that they splashed out on Defoe just a year ago.  A year – it has really only been a year since this all officially began.

It started with a fairly clever – although very annoying by the end – marketing campaign; the ‘Big Bloody Deal’ spittake ads were meant to be a cheeky way of bringing a little Brit to the Canucks.  And if you missed those than you probably saw the giant red double decker bus, or the ads in the paper (and on bus shelters, in the subway and so on).  But it kind of was a big deal – now it’s not as though Lionel Messi or Sergio Agüero were coming here – but still, Defoe was playing well for Tottenham and scoring consistently in Europa League.  He wasn’t scoring in EPL much (at that point) because he wasn’t playing much – but leading the competition with goals scored is nothing to sneeze at.  He was one of the marquee players in english football and the buzz was to a degree, deserved.

I’ll be honest here, I was excited about him coming here and joining TFC.  Yes, I was a fan of his to a certain degree, but also it seemed like a big signing that fit what Toronto needed – they needed a goal scorer, one that was in form and playing at or above the MLS level.  Defoe checked off all those boxes.  Was he known as a bit selfish?  Yes, like many strikers they often look for the main chance instead of their teammates; however was he capable of scoring lots of goals?  Absolutely.  So again, I was excited.  For too long Toronto had been without a proper goal scorer – other than Danny Koevermans of course – but still, Koef wasn’t here long enough to make the impact that was needed – coming back from his injury just never happened.  So now here we had a proven threat, someone that should be able to run around MLS defenders a bit and give someone for TFC to get the ball to and wait for the magic to happen.

And for a while that worked – you can’t tell me that those two goals he scored in Seattle didn’t make you cheer, that you weren’t somewhat mollified (if not a fan of Defoe) by the immediate demonstration of his skills.  And then he followed up on that first game by scoring the winning (and only) goal in the home opener.   In fact he scored eleven goals in the first thirteen games that he started.  Eleven in thirteen.  And finished the season with eleven in nineteen – who’s going to turn their nose up at production like that?  How can you complain?  In fact TFC never lost a game in which Defoe scored a goal, not one.  And yet, there were troubles.

Trouble started before the injury – or before the injury got to the point that he had to stop playing.  There were issues with the physicality of the MLS game, with opposition defenders getting their licks in on him and honestly with the refs not giving him a lot of calls.  I am one of the loudest opponents of ‘star player’ (or the NBA rule of calling fouls) treatment in games but boy did it ever seem as though Defoe rarely got the calls.  And in the beginning they were legitimate calls – before the petulance took over and he started to work for them – refs did not seem to view him as a player that needed protection.  Which of course is ridiculous, MLS is a league that loves to protect its DPs and star players – but this isn’t about the refereeing, that would take an entire series of articles!

Then Defoe was left off of England’s World Cup squad; a very surprising move by Roy Hodgson and in the end a poor one as England was starved for goals in Brazil.  They certainly could have used an in form and motivated striker to get them further in the competition.  That snub and increasing issues with his hamstring (eventually becoming a groin issue) had a huge impact on Defoe.  Already there’d been moments on the pitch where he wasn’t engaged with the rest of the team, the strolling about the pitch, the hands on hips and of course the almost brawl with Gilberto in the now infamous New York game – all of that was adding up to unhappy and unhappy strikers are rarely productive.

The groin injury sidelined him for most of the back half of the season and this is where the wheels truly fell off.  Players get injured, we as fans understand that and we hope they get better and come back to help our team.  The issue with Defoe wasn’t that he was injured; it was how he (and presumably his management) and TFC all dealt with it.  And that’s by suddenly going silent.  So little communication about Defoe’s status – and whereabouts – was given that it is impossible not to understand the ire and confusion of the fans.  Even if Defoe is not the most media savvy of players – and observational evidence would say that he’s not (although would you want cameras shoved in your face as you come out of the shower?) – someone on his team should have stepped up and used his twitter account to at least soothe the TFC fans.  But it was weird, the team didn’t seem to know what was happening with him – or had even talked to him – no press conferences, no interviews, no updates.  All it did was point to a player that seemed to have checked out and wanted out.

And then he came back – whether it was because he truly wanted to be back or because the deal with QPR was quashed we may never know.  But in a presser in which he quite frankly fled at the end, Defoe vowed his commitment to the team and helping them make the playoffs.  Well, we all know how that ended.  Like every TFC season and every experiment or attempt to change this team, it ended with a whimper instead of a bang.  By the end the team seemed quite content to throw Jermain Defoe firmly under that double decker bus – Tim Leiweke made several mentions of not wanting him around,  Bez and Vanney were less than expansive in their comments and stories circulated in the media about Defoe’s mother, about his lack of commitment to his new team and city, and so on.  The big bloody deal became a big bloody blame game.

So who is to blame?  Is it Defoe for not enthusiastically embracing being TFC’s biggest, shiniest, DP ever?  For not speaking up and out more about his condition and what he was thinking?  Is it TFC for not supporting their player more, but also for not communicating with the fans (or insisting that Defoe speak up) about his condition and what their plans were.  Is it TFC for not putting a better supporting cast in place instead of trying to work around two big players and hope for the best?  The answer is yes. To all of these.  As disappointed as I am in Defoe and what happened – this isn’t all to be laid on his doorstep – he’s not a Judas, he didn’t betray the team.  Really, he didn’t.  He walked/ran/sprinted away given the chance but there is plenty of fault to be shared in this.

It’s too bad because there was potential for this to be kind of good.  For Toronto to have their cake and eat it too.  If relations could have been smoothed over and Defoe had returned (which in a weird way I secretly wanted) while Vanney and Bez looked to upgrade the rest of the team, well then who knows.  But it’s over now and Jermain is off to the bright lights of Sunderland and looming relegation.  Really though; this should have worked and it will stand out as one of the bigger mistakes made by Toronto FC in their eight years of failure.  On to the next and hopes that this time, maybe this time they won’t screw it up.