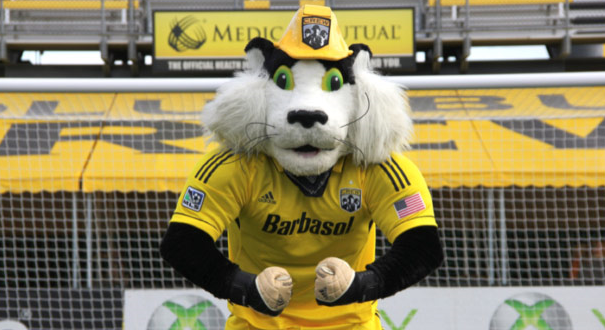 From time to time we realize that you, our devoted readership get a little tired of our hard-hitting style of investigative journalism. So, once in a while we invite a guest columnist to sit-in for TFC match coverage.

Since tonight is the universally awaited second leg of the 2016 Trillium Cup, we aimed high to bring you an analyst with in-depth knowledge of this infamous rivalry and one who has seen its drama up close like few others. Ladies and gentleman, the Intercontinental Soccer-Football Mascot Symposium 2006 “Mascot of the Year” (Third runner-up), USA Mascot This Week’s “Mascot Most Likely to Give You a Rash” 1999, 2001, 2002, 2004, 2007, 2009-2012, and successful defendant of three separate civil lawsuits… from his private (litter) box at Crew Stadium, tonight’s reporter ex-Columbus Crew mascot “Crew Cat”!!!

FIRST HALF:
KICK OFF – “Yo how’s it hanging Toronto. You ready for my anal gland jelly? You mangiacats still in “re-building” mode? Yeah thought so. Let’s get this sh*t on the road – I gots two Siamese waiting for me at my motel.”
1′ – “We’re Trillium Cup Champions!”… said no one ever without irony. Seriously, there’s like five of them laying around here… Tony Tchani puts my kibble in one. I use the 2008 one as a bong.”
8′ – “You guys got rid of that Damien Perquis? He was about as useful as a Scottish Fold in a whorehouse.” (Cat Trivia: Scottish Folds have terrible libidos. Trust me.)
15′ – “I went to Toronto once, it’s no Columbus but I had a crazy night at the Toronto Humane Society. Cages full of honies – and they go full fur in Canada. Props.”
21′ – “Sorry the Toronto FC but your defence is exactly like a dog… useless on so many levels.”
23′ – “You know who’s a Class-A douchebag? Timber Joey. Pervert.”
30′ – “TFC chasing the ball like me vs. rolled up tin foil.”
35′ – “Your goalkeeper from U2 is hilarious!”
40′ – GRRP. GRRP. GRRP. GRRP. GRRP. YEEACHHHHHKK!!!
41′ – Sorry dudes, hairball.
44′ – “So why did you guys get rid of Paul Mariner? Partied with that wildman a few times after matches. Couldn’t understand a word he said. Swear he gave me ringworm.”
45′ – “Halftime. Going for a um… nap. Don’t come looking for me.”

SECOND HALF:
Severe rain delay? Lightning? F*ck this jazz, I blew seven lives on STD’s – you’re on your own hosers! Bye Feline-icia!

CREW CAT’S TFC MAN OF THE MATCH:
“Alex Bono for teh LOLZ”

THE (CAT) BATH:
“Look hosers, we’re never gonna be cuddle buddies. I might spray you out of pity but that’s about it. That being said, how you crazy f*ckers still follow his team is something. If my owner saw me in that much pain he best be getting me euthanized.

Don’t sweat it though Toronto, if Crew Cat knows anything about science, you only have two more lives to go and the thing dies once and for all. So lay back, lick your undercarriage and it will all be over in 2018

Gotta jet, I’m gonna go drop a deuce in the 2013 Trillium Cup. Meow suckers.”
The views expressed by Crew Cat were Crew Cat’s alone and not necessarily those of The Vocal Minority or Columbus Crew. Well we’re guessing about the Crew and we actually think he made some decent arguments.

*The game of course ended 1-1 on a ugly goal from Afful and a sublime one from Jordan Hamilton. We had hoped that this match report might lead to a redemption of sorts for Crew Cat, but alas.*