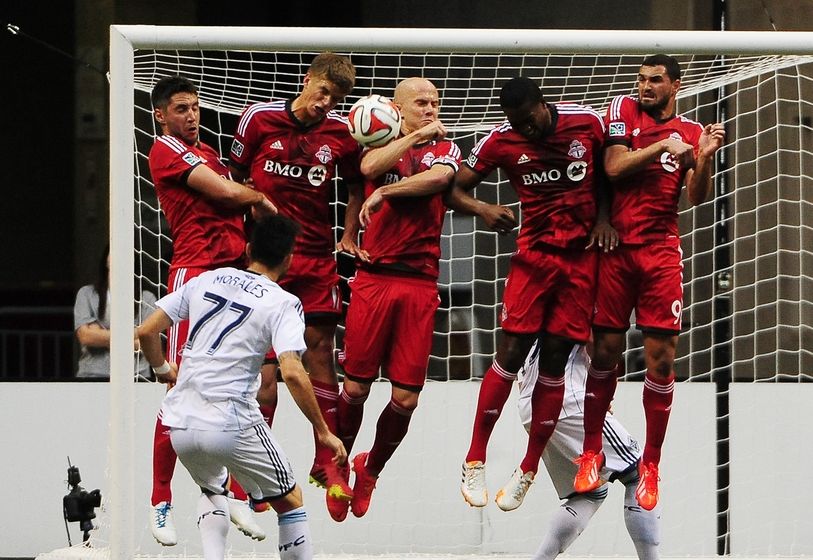 Morales kick is so powerful that most of these players are gone.

It’s been a long cold winter and I don’t know about the rest of you, but I am more than ready to once again watch Toronto FC every week.  Amazing how long four months feels without your team to watch.  It is a relief to be through with all of the off season madness and just have a game to look forward to.  And what better way to start the season than a seven game road trip?  Even better, lets start that road trip in Vancouver; you know that site of so much success for TFC…

In what seems to be now be tradition with three of the last five (including this year) season openers coming against Vancouver, our Reds will once again go up against the Whitecaps in their first game of the new season.  This is a cause for some trepidation as Toronto’s record against Vancouver (Voyageurs Cup notwithstanding), is less than stellar during MLS play, and they’ve yet to win when starting the season at BC Place; hell they’ve yet to win there period.  Fun!

Neither Toronto or Vancouver covered themselves in glory last season; TFC of course imploded during the last 10 games of the season going from third to seventh and finishing the season with a mere forty-one points, while Vancouver limped into fifth place and the knockout round of the playoffs (losing to Mark Hinkley’s FC Dallas), and finishing with fifty points.  While Toronto did manage to set a club record (try not to laugh) for wins with eleven last season, it is hardly something to laud and really only looks significant in comparison to the nightmare of the previous years.  So huzzah for some level of improvement (and yes, they were better last year), but let’s be realistic about where they ended up.   The other big red flag from last season for Toronto is goals allowed – fifty-four – only four other teams let in more goals.  Sure teams like the New York Red Bulls allowed fifty goals, but they also scored fifty-five while TFC only managed forty-four.

As is Toronto FC tradition there have been a significant number of changes in the off season, a slew of players departed: Dwayne DeRosario, Jermain Defoe, Jeremy Hall, Andrew Wiedeman, Kyle Bekker, Doneil Henry, Dominic Oduro and *sigh* Gilberto.  Coming in to fill some of those vacancies are: Jozy Altidore, Sebastian Giovinco, Damien Perquis, Benoit Cheyrou, Marky Delgado, Robbie Findley, Eriq Zavaleta and Jay Chapman.  The annual teardown and rebuilding of the squad is a tradition that I could do without, however there are some definite improvements in the first team players, specifically those that are in the presumptive starting eleven so I have some hope for positive results this season and perhaps even in this game, although only a little.

Assuming that Greg Vanney sticks with his most recent eleven we should see: Joe Bendik, Warren Creavalle, Steven Caldwell, Damien Perquis, Justin Morrow, Michael Bradley, Benoit Cheyrou, Jonathan Osorio, Sebastian Giovinco, Robbie Findley, and Jozy Altidore.  That’s not a bad team to put out, is a definite improvement over last year, and one that for the most part I’d be more than happy to see on any given day – on paper that is.  Preseason brought its fair share of concerns and questions; team chemistry, would Jozy or Seba find the net and how would Michael Bradley look in the midfield?  Their last game against the U23 Costa Rican team was the game where we were finally able to see a bit of light at the end of the tunnel – but still, more questions.

The main things from that game of course were Altidore and Giovinco scoring, the master class on ankle-breaking by Cheyrou (so much fun to watch) and the potentially concerning trend to have the outside backs bombing up in the attack while Bradley and Cheyrou drop very deep to defend and collect the ball.  And it’s that last part that is potentially frightening going into the match against Vancouver.  TFC’s defense are not exactly fleet of foot; Vancouver’s attacking players are – see the problem?  If Toronto are playing the high press all it takes is for Manneh or Morales or…and so forth to have a ball sent in for them to easily get in behind the defense and cause all kinds of trouble.  Did I mention new striker, Uruguayan Octavio Rivero?

Add to this – as always – is the ex-Red effect; this year’s contingent not only has Matias Laba (SIGH – and no I will not let it go!), but now has the added punch of Robert Earnshaw.  Yes the Zambian Prince himself has been trialling with the Whitecaps and as far as we know he’s still with the team; which of course means that he’ll get subbed on late in the game to score the winning goal.  Vancouver has their fair share of weapons and have had very little turnover from last year with twenty-two players returning, twenty-two!  That kind of familiarity cannot be underscored enough; long an issue at Toronto they again are starting the season with a raft of new players and that could see them stumble to start the season.

Things of note for this game:

I am very excited about this game – because we finally get to see our team in action.  Preseason gives you so little to work with, players don’t go all out, there’s more of a willingness to try new things that you wouldn’t necessarily in a game that mattered.  On paper this is a much better starting team than Toronto has fielded in some time – the depth is still a big question mark and several of the starters have much to prove.  But really, I just want a decent game, I want them to compete, to not get blown out and to not get injured.  Most of all I’m just really looking forward to watching the game with my friends and the VMP crew – because really when it comes to TFC, after eight years of futility its more about who you watch the game with than the game itself – maybe this is the year they change that.  Come On You Reds!