Toronto 6, Columbus 3. It could happen again. 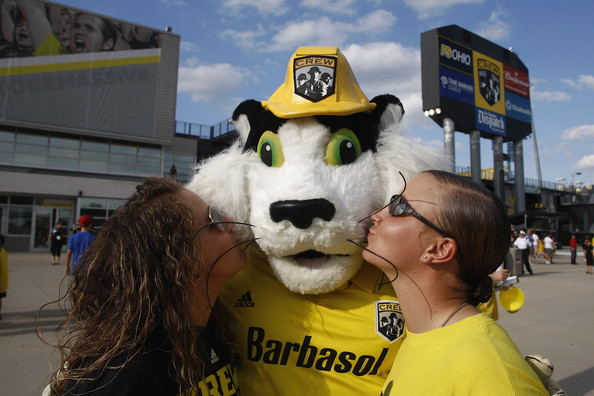 Both these ladies now have incurable Feline Aids.

Hello there T, F and C fans, how are you feeling? Happy, maybe a bit confused after that whole playoff clinching thing?  Not to worry, MLSE are here to bring you back to reality. Less than 48 hours they gave us before the playoff pricing and 2016 season ticket renewal pricing was dropped.  Depending on where you sit, your increase could be over 40% (what’s that, that’s where my seats are, oh good.) though some areas are more reasonable.  As for playoff tickets, I know light grey is $35 which isn’t terrible really, presumably other areas of the stadium are increased by similar levels. Again not outrageous, the fun part of it is that if you want one, you have to commit to buying two, and what’s the deadline? October 22nd. Also known as; before we even know if there’ll be one home game never mind two.  It’s standard sports team stuff really, I’d have a hard time getting properly outraged about it, though it does nicely expose the lie that they were dropping prices the last few years out of appreciation, or loyalty as opposed to desperation. Also will I pay that for next year? Sure, I guess so, but you’d best really hope that the Argos thing isn’t a fiasco cos I doubt I’d be paying that much for the full on shared stadium ripped up pitch full of football lines experience.

Anyway, this is supposed to be a preview piece isn’t it? Not to worry readers, it does all tie in. Remember how I mentioned we won’t know if we even have one playoff game before we’re forced to pay for 2? Well that could all change with the right result here. Win and the worst TFC could do would be 4th place which would be a home wild card game. A tie would probably be enough for that, it would mean a lot of results have to go against TFC to deny them. These are heady times folks.

Is that win possible? I’d hesitate to predict anything really at this stage. TFC have been relentlessly haphazard against good teams this year, giving up all sorts of good chances, but then against New York they played a much more circumspect game that gave Chris Konopka a very quiet night. perhaps that was just a case of Greg Vanney having to react to not having his star players available and thus making do with playing defence. With Bradley back in the lineup and Giovinco starting, will he be tempted to once again try and beat them on the attack and thus leave all sorts of holes to be taken advantage of? It’d make for an entertaining game, but I’d love to see him do the opposite, maintain the defensive focus, let’s have another dull first half, at some point Giovinco will get the chance to do something good no matter the tactics. Jozy Altidore’s definitely out after being a very naughty boy on Wednesday, Damien Perquis is reportedly out as well, and there’s a chance Jonathan Osorio might be out suffering the effects of a Herculez Gomez free kick to the face. There may or may not be word of Robbie Findley still being injured or not, but it’s Findley, so I’m damned if I’m going to search that down. It’ll be an interesting line up announcement. Might Ashtone Morgan get another start in midfield? It didn’t quite work on wednesday, some runs and passes were on the disjointed side, though surely that’s a chemistry kind of thing that would improve with practice.

It’s also a fools game to predict anything from Columbus, they’re as weird and roller coastery as TFC, the reds are 1st in goals scored, and 3rd in goals conceded (1 goal behind both Orlando and New York after Friday’s game, though TFC have a game in hand), the Crew 4th and 4th.  They went winless in their first 9 away games, then won 5 of their last 7.   The last time these teams played? Columbus won the first half 3-0, then lost the second half 3-0. So your guess is as good as mine really. Toronto just beat Columbus 6-3 in hockey, with these defences, that’s not entirely out of the question tomorrow as well.

The first game this season was a 2-0 win for the Crew that saw them repeatedly take advantage of TFC’s defensive weaknesses, with plenty of breakaways, and attacking down the wings behind the hapless Warren Creavalle at right back, or overloading down one side before a switch to a wide open player on the other side, usually Justin Meram against the woefully unsupported hapless Warren Creavalle. That’d be a good idea of what not to let happen, and to be fair we certainly didn’t see that against New York did we?

The other thing to watch for is of course Kei Kamara goals, he scored in both games so far this season, I could see that happening again, and given that he was on twitter cheering on the Royals tonight, I wouldn’t be surprised to see him co-opt the whole stir the pot celebration when he does.  Kamara vs Giovinco is the obvious subplot for this game given that both of them currently have 22 goals at the top of the golden boot race.  Given the respective defences, you could see both of them having multi goal games to keep the 27 goal all time record within reach going into the last game.

What else? Oh yeah, it’s going to be bloody cold. Forecast of 6, and maybe snow. I guess we’re a playoff team now, got to continue the training for some November games. Fun.