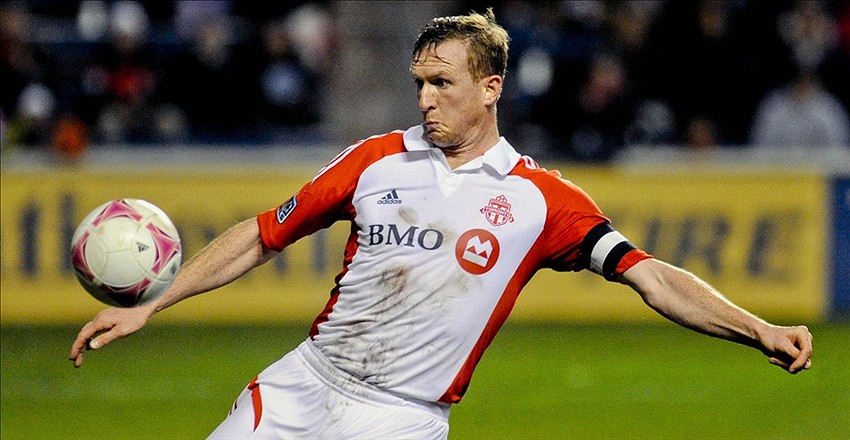 I’ll give you my armband when you pry it from my cold flailing arm!

We all knew this was coming. Michael Bradley seemed like the obvious successor to Steven Caldwell as club captain, as much due to his pricetag and reputation as to his (inconsistently last year) inspirational play on the pitch. There’d been chatter of his opinion being very valuable to Tim Bezbatchenko last season, and this off season it seems like the decision was made to really play up just how influential he’d become. Bezbatchenko, Greg Vanney, Tim Leiweke all lined up to sing his praises and boast of the input he’d had in the new arrivals this off season, that he’d restructured his contract (though we have no details of what exactly that means), this was ‘Bradley’s team’.

Naturally enough, all that Bradley fawning led to the question of just who’d be captain this year being asked and in January Greg Vanney completely flubbed the question saying that it wasn’t decided, he’d be talking to the team and announcing it later.  That made it obvious that it would be changing, no need to announce anything if it’s just staying the same, and added on top of the question of why change, the question of ‘why the hell are you doing it this way’?

We than had another Leiwekeleaks episode as on a totally organic supporter inspired bus ride with the executives and mascots to the airport to meet Giovinco, Leiweke confirmed to a fan that Bradley would be taking over, and revealed the extent of Bradley’s input (a lot apparently).

Anyway, with the team back in Toronto between trips to Florida, it got made official. Both TSN and Sportsnet putting out articles confirming that the captain’s armband would indeed go to Bradley with official confirmation from the club expected later today (apparently Caldwell got the news from Vanney over the phone!).

There’s a couple of obvious questions here. First, if everyone knows this is Bradley’s team, why not make it official? Second, does it really matter? Players can be leaders with and without the armband and the official title, there’s no guarantee this will lead to bad things, why make a mountain out of a molehill?

To answer the first question, yes, it’s clearly Bradley’s team and he was clearly the future captain, why did this need to be done at all? Who knows how the situation came about, did Bradley ask to be made captain, or did management bring it up with him? Either way, he would have at the very least be consulted and agreed to the change, which is really the part of it that made me think this might not happen. I don’t fault any player for having ambition, but just in terms of dressing room politics, this seems a very dumb and unnecessary thing. Steven Caldwell is going to be a big part of the team this year, there’s not a lot of depth defensively, and we all saw what happened when he was injured last year. He’s made it obvious he enjoys being captain and would like to continue, why put his nose out of joint like this?

Does it matter? You’d hope not, you’d hope that these are all professionals, that Bradley and Caldwell can continue leading in their own ways like they did last year without the official title making a difference, and the rest of the team will happily, or at least professionally adapt to any changes that come from this. But that’s massively optimistic.

In any dressing room at any club in any sport, get a group of players this large together and different friendships, groups, cliques will develop, that’s just a fact, human nature. Multiply that by a factor of MLS, and it’s particular eccentricities, the huge wage disparities, the lack of contract security, any festering resentment that might come out of the CBA talks, and players going up and down between the big team and Wunderland AFC. Now multiply that by a factor of TFC, with their long and proud history of drama, cliques, backstabbings and power struggles.  There’s going to be issues that come up during the season, guaranteed.

It’s fair to say that among the players that have been at TFC for a while (by TFC standards of course) Caldwell is probably someone who has their respect after his year and a half as captain. Some of them would view him as a leader, someone they can talk to about issues, or vent to trusting that it wouldn’t get back to management. Why not allow him to keep that role for the sake of dressing room harmony. Given how management has talked Bradley’s influence up, and how much or a role he now has in player moves, he obviously has a cosy relationship there, would you as a player trust him to have your back with potential personal issues or problems with management, playing time for example?

Maybe that’s the plan here, that they want everyone to be absolutely on the same page so the symbolism is very much that this is Michael Bradley’s team, it’s his way or the highway, they don’t want to encourage seperate groups and cliques to develop, thus the symbolic kneecapping of a potential leader other than Bradley. Sounds good to have everyone going in the same direction, after all TFC have had plenty of issues with internal conflict before, but that would be a very dangerous path to take. It’s crazily optimistic to think that all will run smoothly in this new direction and there won’t be any issues at all, having a trusted captain less closely tied to management to act as a release valve for any frustrations would be a valuable thing

There’s a lot at stake for TFC this season, a lot of money has been spent, expectations are high again, and really there’s no excuse for not clearing the low bar of 6th in the east to get that playoff spot. The squad seems improved but there’s definitely plenty of ways things could go wrong. Once again the salary cap is top heavy. I’d guess that Benoit Cheyrou and Damien Perquis are on high non dp salaries, probably close to what Steven Caldwell’s making, so those 3 plus the 3 DP’s will be taking up close to $2m of the salary cap. That’s worrying as we’re going to need depth as the season goes on. Cheyrou is 33 now, Perquis has had a lot of injuries recently, Caldwell’s also getting on, there’s a lot of injury potential there. Cheyrou, Perquis and Giovinco are all new to MLS and it’s particular challenges, plenty in their position have failed in the past. Bradley and Jozy Altidore will miss a few games for the Gold cup. We have a very inexperienced coach and GM at the head of all this. There’s potentially a new president of MLSE coming in this year, who knows what ideas he might have? Not to mention a 7 game road trip to make it difficult to get off to a good start. With all that, why add one more potential problem to the mix?

IF TFC didn’t have it’s history of dysfunction, of treating players badly, or having power struggles repeatedly torpedo seasons, if there wasn’t the pressure of that past, combined with the pressure of expectations made by this off season’s wild splurging, if they didn’t have an inexperienced management team without the accrued respect necessary to keep a lid on any problems, I’d agree that this is a bit of a non story, and I’d be confident that nothing bad would arise out of it.

But they do have all those things. Why after a seemingly impressive couple of months (off season champs some might say) would you create this issue? There’s no guarantee that there will be any problem of course, this article could end up looking very silly, but this year’s dysfunction and drama is now set up and ready to happen. Never change TFC, never change.