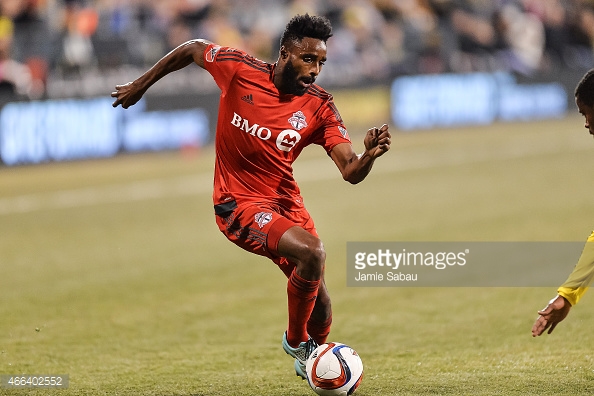 Warren Creavalle, happily not trying to defend at that moment.

Did Justin Morrow get the ball? Yes he did. Did he also get the man? Yes he did. Did he get the man first? It was close, but yes, yes he did. Was it a foul? Personally I think it was a good tackle, but I’m an old man with standards that are much more lenient that what generally gets called these days, so it doesn’t surprise me that it was called. A bit harsh, but not absolutely outrageous.

Did Damien Perquis (after giving the ball away to Ethan Finley in the first place) kind of give up on the play, thus ensuring that Morrow was absolutely the last man? Yes, he did. Did Morrow’s tackle knock the ball out of Finley’s path if Finley hadn’t been knocked down? No, not at all, he’d have been in great position to shoot. If it’s adjudged a foul, should it have been a red card for denial of an obvious goalscoring opportunity? Absolutely.  Giving the card to Perquis initially was an absolute joke, yes, but the rest of it falls well within the boundaries of normal (for better or worse) refereeing, so i think the witch-hunt, accusations of bias and demands that Dave Gantar should never referee another TFC game again are all a bit much really. We see worse calls every week in MLS and every league in the world.

But I can understand the outrage, the call was certainly in the ‘debatable’ category (didn’t surprise me it was called, also wouldn’t surprise me if the red card gets rescinded on appeal), and hey it’s what football supporters of all teams do, a handy whipping boy rarely goes unwhipped, a scapegoat un, erm, scaped. But the idea that that call is what cost TFC the game? Let’s move past that shall we, teams survive that sort of thing all the time and do well with ten men, see San Jose against Seattle this week, there were plenty of other issues it’d be much more relevant to focus on here.  To be fair to Toronto, once you move past the juiciest quotes picked out by the media to stoke the controversy/distract from the issues, and watch their interviews/read the full quote sheet, both Greg Vanney and Michael Bradley take a disappointed but reasonable tone to the decision and acknowledge that the defeat was still down to how the team played in the 2nd half, which is refreshing to read. I’ll copy paste them into the comments section rather than clogging things up here.

So, what were the issues? Well firstly unlike last week, the best players weren’t the best players. Sebastian Giovinco got a few chances in the first half, but poor shots saw them go to waste, or in one instance an overly delayed pass/cross to Robbie Findley mean the opportunity to put him in behind the defence was lost. There were again flashes of skill and promise, but the end product was definitely missing this week, and for a player the attack is suppossed to be run through, only 38 touches is pretty weak, compare to 71 for Federico Higuain. Talking of missing, Jozy Altidore was pretty pretty anonymous in this one. He had a decent game last week and there’s plenty he brings to the team, he definitely did his bit to help out the defending, but if you want an alarming stat, he now has 3 shots in 2 games, that’s attempted shots, not shots on goal, one of them was the penalty, that doesn’t suggest we should be expecting too many 2 goal games from him.

Moving on from the fancy forwards to the fancy midfielders, Michael Bradley had a lot of giveaways in that first half and has yet to put in a particularly impressive performance, the full backs advancing and centre backs going wide meaning he’s playing a very defensive role so far.  In this game so was Benoit Cheyrou, as Columbus attacked down TFC’s left side a lot (as illustrated in the average positions map below, and by Matthew Doyle over at MLSSoccer.com)  dragging the defence over to the left before before putting crosses in for Justin Meram coming off their right wing, or switching play earlier over to the right whenever the Warren Creavalle sized holes were available.

Columbus on the left, TFC on right. Via whoscored.com

Two things really stand out from that, firstly just how forward Columbus’ full backs were able to get, I definitely think they’re very much the prototype of what Greg Vanney eventually wants to turn TFC into, and a good advert for it as well. Then there’s how much further forward Findley, Osorio and Creavalle are on the right than Altidore, Cheyrou and Morrow on the left, whether that’s by Vanney’s design, the players own decisions or merely reacting to what Columbus did, is up for debate.  Anyway Cheyrou and Bradley were rarely able to have much offensive influence on the game, and there were a few notable mistakes (the 2nd goal, the Morrow sending off for 2 high profile examples) from Damien Perquis as well, so those who shined last week didn’t really follow it up.

Another problem, Warren Creavalle. I don’t think he’s as bad as people make him out to be, and he wasn’t caught out of position as much this week as last, and often him being out of position is really him following orders. This week though he was very noticeably there, but ineffective at crucial times. Justin Meram beating him to the header for the first goal wasn’t a coincidence, that was the 3rd time a cross from their right had found Meram outjumping Creavalle. Often that was right in the middle of the box, a testament to Kei Kamara’s unselfish movement pulling Steven Caldwell out of the middle. Now Creavalle did some good things as well, and as I’ve said before if you’re going to have your full back be a midfielder, might as well have him actually be a midfielder, but defensively he really stuck out this week.

Has Creavalle done good things going forward? Sure, and Columbus very much showed the value in full backs getting forward, but for now this is very much a work in progress for TFC. It might be for the best to stabilise things a little as we go through the growing pains of the team getting to know their tendencies, when to press or when to drop back all that sort of thing amidst a 7 game road trip. That might mean adapting his role, telling Creavalle to think more as a full back and less as a midfielder, or simply bringing in Mark Bloom to bring his naturally more defensive full back instincts to the same role, but something needs to change.

Creavalle’s inclusion so far is a symptom of something that is affecting the whole team, which is that Greg Vanney seems to be just a wee bit too optimistic at the moment. He’s talked about wanting to control games and not be as reactive as TFC have been in the past, but so far through 4 halves of football, there’s been one good half. That half came when TFC took a much more circumspect attitude and controlled the game by not trying to aggressively force themselves on it. More of that attitude would have been helpful in the second half here as TFC adapted to Morrow’s red card. When teams go down to ten men and lose a goalie or defender in the process, more often than not the outfield player sacrificed to restore the defence is an attacker, but not here, Vanney choosing to leave Robbie Findley on and instead weaken the midfield numbers by removing Osorio. It didn’t work (obviously the injury to Steven Caldwell didn’t help matters) despite having the advantage of a full half time to figure that out, a luxury teams don’t often get, usually having to adapt on the fly. Rather than focusing first on solidifying defensively and then going from there, that decision allowed Columbus to run riot in the second half to the point where the 3 attackers barely had a chance to do anything more than try their best to help out the overmanned defence.

Playing a positive, assertive style is all well and good, there’s definitely potential for these tactics to work well given the necessary tweaks and modifications that will be required through the season. Once it all gels properly and the correct balance is found, add in the talent that’s there and TFC could become a very good team.  Right now though that balance isn’t there and until it’s found, good teams are going to have a field day as we’ve seen twice now. Obviously this was one game against a good team in trying circumstances, writing anyone off after that would be as foolish as planning the parade based on the opening day win, but currently, the second half against Vancouver aside, Vanney’s optimism is seeming more like naivete, and making it way too easy for the opposition.