Home » Match Previews & Reports » Toronto FC vs Colorado Rapids: Can TFC Bounce Back From A Frustrating Game At SKC?

Toronto FC vs Colorado Rapids: Can TFC Bounce Back From A Frustrating Game At SKC? 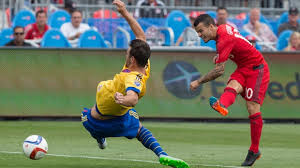 Can Toronto FC get higher – up the standings!  I’m not suggesting anything else, really – but can our Reds take advantage of a less than settle Colorado side? Playing the Rapids during this part of the road trip is really a pretty good thing; one of those games you made note of when looking at the schedule for this season.  Colorado is one of the few teams that TFC have a winning record against (although of course not on the road), the two teams have the same record (Toronto with more goals) and of the two teams our Reds are actually the most settled.  Toronto beat Colorado in their only meeting last season (at BMO Field) and while yes this is a road game, could well do the same tonight.

The Rapids seem to be in the midst of an overhaul this season with a number of off-season moves that can be seen as Paolo Mastroeni looking to the future.   The team signed talented problem child Jermaine Jones (suspended for two more weeks), Marco Pappa (from the Sounders for GAM), Albanian DP Shkëlzen Gashi, and most recently their (soon to be) DP keeper Tim Howard – all after trading Clint Irwin to Toronto, as well as letting Drew Moor go (also to TFC), not to mention trading Marcelo Sarvas to DC United – several key pieces gone with their newer pieces still gelling.  So a team with some uncertainty to and now also missing Kevin Doyle who was injured during international play – google it if you want, but be warned it was a nasty injury.

Of that list of players Marco Pappa is the one that Toronto need to be really mindful of; Pappa’s been in good form to start the season, scoring one and assisting on the second of the Rapids’ goals thus far.  He’s linked up well with Dillon Powers (also scored and assisted) and they appear to be forming a good partnership.  Gashi’s yet to make an impact and was carrying a knock from the Albanian camp but he’s not to be discounted.  But this is not a team that is fully formed as of yet so there are plenty of areas to exploit for Toronto.

The other story at Dick’s Sporting Goods Park – or The Dick as they call it (snigger at will) – is the altitude.  Is it really an issue?  Well, it has to have some effect as they are playing at a higher altitude (approx 5,200 feet above sea level), but is it more psychological than physical?  According to Drew Moor and Clint Irwin the latter is more the case, although clearly fitness plays into this and may have been more an issue in earlier days.  This could be a factor for TFC with a couple players coming back from injury and one that is still getting their fitness back.

So speaking of TFC players; this is the first match of the season where Greg Vanney has everyone available for selection.  Dan Lovitz and Jonathan Osorio are both available after being out injured, Jozy Altidore continues to work himself into form and the players away for international play have returned. Of all the players Altidore is the one you’d expect the most time to be given by Vanney as he needs to work him back into the team; especially to give the Reds more scoring options once their road trip comes to an end.  Familiarity is needed for any team to be successful.  But like Michael Bradley and Will Johnson, Altidore played during the international break and Vanney will likely want to be careful with him.  Will we perhaps see Cheyrou start again?  Maybe with Oso and Marky Delgado out there to support?  There are options for this game and you can’t help but feel that a result is more than a possibility.

This is a game in which TFC should come away with a result; the teams are more than evenly matched and Toronto have the edge in available quality and team cohesion at the moment.  This should be an entertaining game, even with Toronto’s focus on defense while they slog their way through the road trip.  I’m going out on a limb and saying 2-1 TFC.

*The below video is a little extra from the SKC game.  Given what transpired in the NE/NYRB game last night, when do you think teams should put the ball out, if ever?  Although the issue with Davis was that his team was going to stop play and he decided to play on.  Either way, let us know your thoughts in the comments*