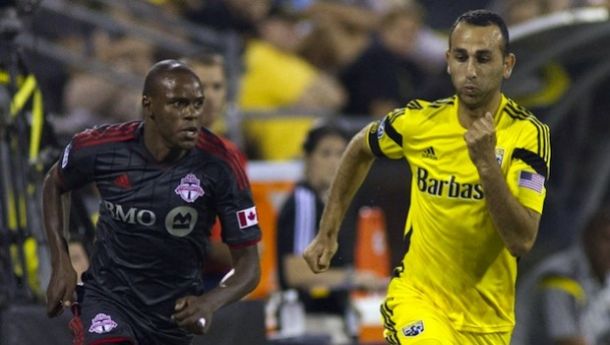 Now that everyone has settled down after last weekend’s surprise win over the Whitecaps it’s time to turn our attentions to a tougher test and look ahead to the match against our Eastern Conference rivals, the new (new name, new badge, new mascot!) Columbus Crew SC.  I’m delighted that TFC managed a decisive win last week – especially after that first half of awfulness – but this game in Columbus is no walk in the park.  There’s no need to delve deeper into the rivalry between the two teams – at least not until the second game of the season – after the extensive look at TFC rivalries we did earlier this week, but the team itself warrants discussion.

The Crew have been tapped by many (including VMP’s own Duncan Fletcher) to win the Supporter’s Shield this season on the strength of a solid year in 2014 under Gregg Berhalter that saw them finish 3rd in the East and set several team records.  The team that has returned under Berhalter has seen a number of changes but familiar (and problematic) faces have returned for another season in the yellow – sorry, gold – kits of the Crew.  Chief among them is Frederico Higuain; that long-time thorn in Toronto’s side.  Although TFC managed to contain him through most of the three games they played against one another last season he is a constant threat on the attack and during set pieces – never mind the danger he poses in one on one situations – neutralising Higuain will be key in this game.

Joining him this season is yet another long time TFC pest, Kei Kamara who signed with the Crew in the off season after a couple years in England in the Championship.  Kamara is still a top player and will likely cause all sorts of problems for many teams this season, using his not inconsiderable speed to harass opposition defenses – remember that high line from last week?  The easiness in which the right side was opened up?  And now picture that with Kamara paired up with Higuain?  Ugh.

There’s much more to the Crew of course – they’ve got Will (It’s A) Trapp, former Red Tony Tchani, Justin Meram, Chris Klute is now with the team and their captain Michael Parkhurst are all players to be wary of for any team.  Meram (who scored two goals against TFC last year) is just back from suspension so will bolster an attack that sent 18 shots against the Dynamo last weekend and will also help to offset Tchani’s absence due to suspension from a rash challenge in the Houston match.  And again – last week’s result notwithstanding – this is TFC on the road, a frightening prospect no matter what year it is.  Everyone excited?

There are positives for this game – all is not doom and gloom, honest!  Toronto are of course coming off of that stunning win against Vancouver last weekend and will be coming into Columbus with a bit of confidence from overcoming one of the worst halves of football they’ve ever played with one of the best.  Jozy Altidore had a great first game, Benoit Cheyrou continues to look like one of the best signings Toronto have managed and Sebastian Giovinco  had an impressive debut as well.

The big questions for TFC will be whether Warren Creavalle (Mark Bloom again not travelling with the team) and Steven Caldwell can rebound from a somewhat disastrous outing last week – neither acquitted themselves well with the first half tactics of Greg Vanney.  Whether that was unfamiliarity on Creavalle’s part, fatigue on Caldwell’s or just style of play – hopefully the back four is in better harmony today or Damien Perquis will need to compensate and Michael Bradley will again need to drop deep to supplement the back instead of working through the midfield.

Bradley and Cheyrou playing so deep was a bit discomfiting to watch in the Vancouver game (and during preseason); while it’s helpful when some of your best players can do multiple things, we’ve seen how Cheyrou (and Bradley) are able to create and set up the attack – for a team that is always starved for goals, having your midfielders (on a team without much width) having to play stay at home defender seems a waste.  Besides, wouldn’t you rather see this again:

This will likely be a scrappy match and having Dave Gantar as the ref has many filled with trepidation – you may remember him as the ref that negated Gil’s goal in that game against the Fire last year, the one that Bradley received a fine for the comments he made after that game.  Gantar’s been in the refereeing wasteland since that game and this will be only the second match he’s been in charge of since then – whee!

Honestly the best I’m hoping for is well played draw and signs that the team is continuing to gel.  This is a seven game road trip and there is little expectation that they’re going to set the league on fire during these games.  TFC do have a bye week next weekend so that may change how they throw themselves into this game given the extra rest and training time between now and their trip out to Utah at the end of the month.  But until then, Come On You Reds!