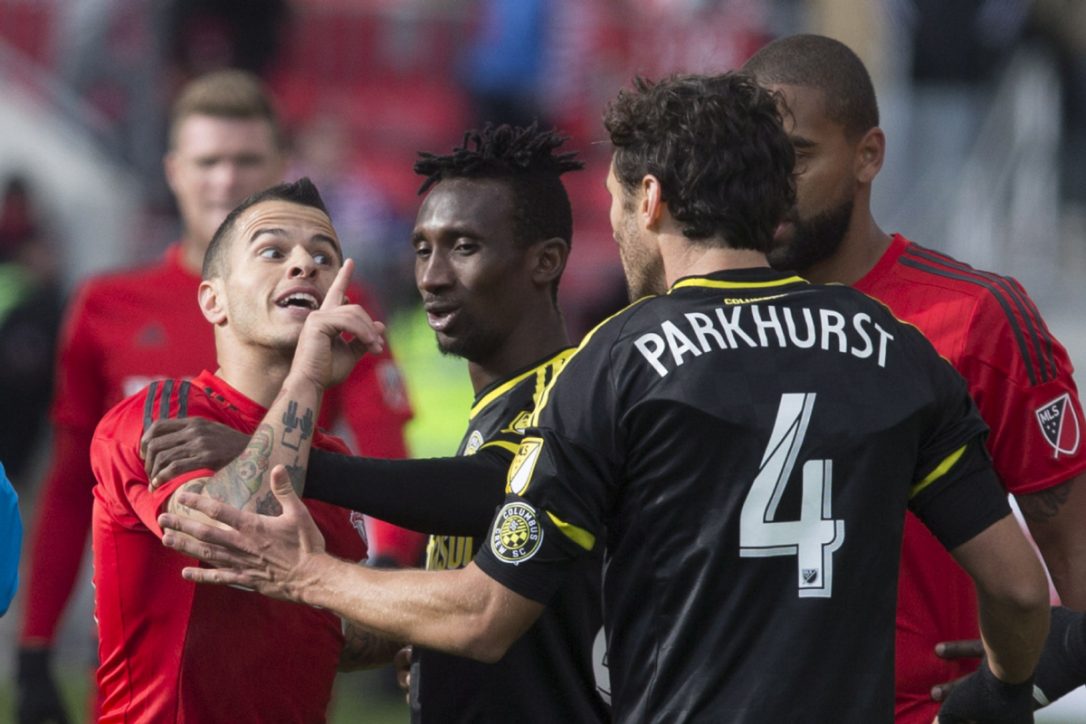 It is once again time for Toronto FC to face their most hated rival – no, not that one! Or that one! – it’s the Columbus Crew you guys!  Trillium Cup time; grrrr.   In the first of two games for our Reds this week they visit storied MAPFRE Stadium to face Kamara and Co.  This would be a more daunting prospect if the Kamara was Kei, if Higuain was healthy and well it was a different Crew team.

Out of the two matches this week for TFC this is the one that the team should be targeting for maximum points; Columbus doesn’t have a great home record, they’re reeling at the moment trying to find an identity without Kei Kamara and Frederico Higuain and relying on Ola Kamara as their sole source of goals – none of which is working particularly well.   In years past the Crew had our number and winning against the yellow football team was a rare occurrence; however fortunes have shifted slightly and there’s at least a better than average chance that TFC will win when the two teams meet.  Tonight’s game gives Toronto a good chance to move back up the standings and be on their way to winning the Trillium Cup! Squeee!  OK, I’m really not at all excited about the cup, but I’ll take the win. Anything for our Reds to strut triumphantly through Randy Savage International Airport.

TFC are in pretty good shape (all things considered) going into tonight’s game with the majority of the squad available for selection, including hometown boy Josh Williams who is back from suspension, and potentially Jozy Alitdore.  One player that is not available is Damien Perquis (stop laughing Duncan!), who is no longer with Toronto FC after he and club “mutually agreed to part ways” yesterday.  This is something we’ll talk about more at another time but really, who didn’t see this coming?  He’s barely played of late, his salary is huge and they’ve enough defenders to do the trick right now; once the transfer window opened that was pretty much it.  Au revoir Damien, thanks for the podcast fun and more than one rather good game (we won’t talk about the not so good ones, that’s our farewell gift).

As for who else makes up the Starting XI?  The midfield (other than current club MVP Benoit Cheyrou) is a bit of a toss-up at the moment, no one’s really distinguished themselves or disgraced themselves so Vanney has some choices.  I do expect that we’ll see Jordan Hamilton start – come on JayHams, take your chance! – up top with Seba (with Altidore coming on late in the game) and then the rest of the midfield really is a take your pick kind of situation.  Back four should be Beitashour, Williams, Moor and Morrow and since Q will never see the light of day of course Bono in net.

I’m hoping for a good game with TFC really looking to take it to the Crew and get some momentum going into the weekend.  Seba needs to find his scoring boots and I’m hopeful that this game will do that for him – San Jose is tough to beat at home so he’ll have more difficulty on the weekend.  Otherwise this is one of the last opportunities for some of the younger players to show themselves worthy of more playing time going forward.  I’ll stick with my podcast prediction of 2-1 TFC.