Home » Analysis & Opinion » Toronto FC vs DC United: Can TFC Put A Loss Behind Them And Get Back To Their Winning Ways?

Toronto FC vs DC United: Can TFC Put A Loss Behind Them And Get Back To Their Winning Ways? 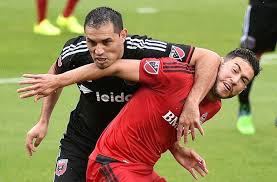 A break is  welcome when you’ve played a ton of games, travelled all over and started to come a bit unglued, so the past two weeks had to be welcome for most of Toronto FC’s squad.  Some had a chance to heal some knocks, some went on vacation and then a few were off playing with their national teams (luckily no one was injured), but now – for the next two weeks that is – the MLS season is back in full swing and TFC will have to stay sharp to remain atop the league.

Kicking off a very busy two weeks that include two Voyageurs Cup and three MLS matches, is a home match against the – currently – woeful DC United.  DCU are last in the East (though not wooden spoon holders just yet), staggering from disappointing result to disappointing result (poor Bill Hamid), and most telling, scorers of only TEN goals all season.  That’s right, just ten goals have the black & red managed to beat an opposition keeper (and only one in their last six games!); and really that’s their problem – it’s hard to win games without scoring, unless you keep a bunch out *checks GA*….sooo, that’s not working for them either.

DC have been struggling the entire season – they’ve been hard hit by injuries (Patrick Mullins, Nick DeLeon, Patrick Nyarko and Luciano Acosta) from some of their top players which certainly hasn’t helped.  And when they’ve been healthy (Acosta, looking at you), they’ve not been that effective.  Sebastien LeToux hasn’t been the spark they’d expected, Lloyd Sam hasn’t seemed dangerous…I could go on – even with a convincing win over Christos FC in the US Open Cup mid-week, they’re still not that dangerous looking – good news for Toronto FC!

TFC are coming off a very disappointing loss to the tea terrorists just before the break (not to mention that ugly loss to Ottawa), that snapped their eight game undefeated streak in MLS play.  This game is tailor made for them to reassert themselves as the top team in the league, keep their hold on the top spot and hold off the surging Chicago Fire.  With all the big guns available (read: Michael Bradley, Jozy Altidore and Sebastian Giovinco), Toronto should be in great position to take all three points today.

This game by no means should be a rout, even with DC United struggling. Toronto doesn’t have the best record against them historically (DCU handed TFC their last home loss – THAT GAME notwithstanding), and it has been a couple weeks since they played together, whereas DC have had some USOC games to at least gel.  Regardless of all that I expect that they’ll win.  They should win – that’s what top teams do, beat weaker opponents at home.  I think my podcast prediction was 3-1 for TFC so I’ll go with that.