Toronto FC vs DC United: Will TFC Capitalize And Steal A Win? 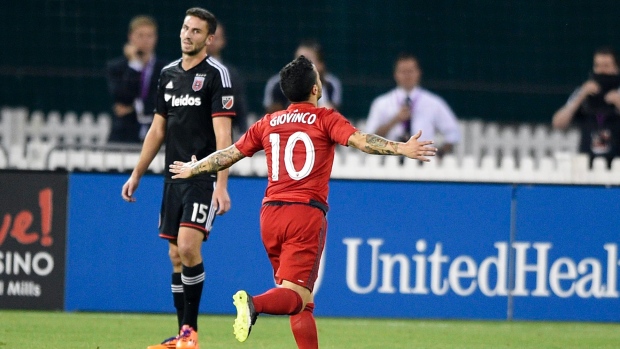 Everyone have a good week?  Enjoying the latest in refereeing controversies?  Hey what about this weather, pretty nice eh?  Alright, enough chit-chat, time to talk game.  This will be game six of TFC’s eight game season starting road trip and another against an Eastern Conference team.  That team of course is DC United – one of the original teams in MLS, generally a good team, and up until last weekend one of the few teams without a win.  However nothing like a visit from the Vancouver Whitecaps to cure what ailed them (and Espindola) apparently.  Whee, a team that’s finding their groove just as our Reds are coming to visit?  Excellent.  Nothing can go wrong.

Toronto FC are of course coming off their one all draw against the Tea Terrorists last weekend that has them at fives across the board; five games played, five points on the season, five goals for and against – just a fun bit of symmetry heading into today’s game. But there are positives in those numbers: TFC have been averaging a point a game which is never a bad thing on the road; they’re not leaking goals (the not scoring is a different issue), which is a great thing no matter where you are – especially if you’re TFC and have had years of defensive inadequacy.  They’ve not set the league on fire but neither have they gone up in flames; of course there’s still time for an implosion – what, you’re all thinking it!

Today’s game against DCU is a pretty evenly matched one – there are a lot of strong players on both sides, both teams have decent midfields and streaky strikers, and both have had some defensive changes (although I’d wager that Toronto are winning the goalkeeper contest).  Where DC United beat Toronto – on paper anyway – is that they’ve a veteran core that are coming into their third (or more) season together as a unit and a coach they’ve had for five years – that familiarity has helped them overcome player losses in Perry Kitchen, Chris Pontius and the still injured Bill Hamid.

Don’t think that the loss of those players means that they’re without weapons – Chris Rolfe was a standout last season and is always dangerous, Bobby Boswell keeps things tidy at the back and now Fabian Espindola has started scoring goals and looking like his old self – yay.

TFC have some player absences going into today’s game that may see Greg Vanney make some roster changes; Benoit Cheyrou and Tsubasa Endoh are both out injured, Nick Hagglund and Eriq Zavaleta have been loaned out to TFCII in advance of their home opener on Sunday – actually I think that’s it.  However that’s two oft starters and two that in the past had made the bench (although not of late), which with the presumptive Starting XI still not set in stone means we could see some differences.  On the positive Justin Morrow did not receive any extra punishment from the DisCo so he should be back at LB (which takes care of the Ashtone Morgan vs. Dan Lovitz talk that had sprung up, at least for now) and the rest of the defense seems set to start.

Who plays on the wing today and in what formation?  Well, it’s likely going to be the 4-4-2 again and given that no one is really shining on the wings right now it’s a toss up between Marky Delgado, Lovitz, Mo Babouli and Jonathan Osorio – Michael Bradley and Will Johnson being the only certain choices.  Do TFC have a chance to win today?  Of course they do – but it will take more than just Seba – Jozy Altidore and the midfield need to be more involved for this to happen.

This should be a good game; expect goals on both sides, expect it to be scrappy in the middle – which should equal some cards – and well, expect TFC to come away with at least a point, because why not.  My prediction from the podcast: 2-1 Toronto.