Home » Match Previews & Reports » Toronto FC vs LA Galaxy: We Were On A Break! Welcome Back MLS

Toronto FC vs LA Galaxy: We Were On A Break! Welcome Back MLS 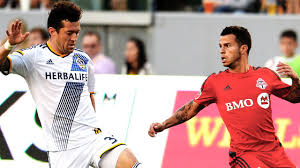 Hey there – yes you with glazed eyes from watching Euro matches by day and then Copa America matches by night – you know what you need?  More soccer to watch!  Well fear not as this weekend MLS returns to fill your late afternoons and evenings!   This of course means that Toronto FC are back at it and what better way to kick off the summer than to welcome Los Galácticos to BMO Field for the first time in three years.  You know what this means; get ready for a lot of red shirts, in the stands, that say Gerrard – yes today will be one of those days where kit spotting gets monotonous very quickly.

Today’s game is the first MLS match for TFC in three weeks after a woeful 3-0 loss to the NJ Energy Drinks that capped off a four game winless streak for our Reds.  Toronto of course hasn’t been idle these past weeks securing a spot in the Voyageurs Cup final after besting the Montreal Impact 4-2 over their two leg semi-final.  Strong performances from some of the younger players allowed Greg Vanney to rest some of his veterans and also allow injured players time to heal.  It was good to see the team perform well without their missing higher profile players as Michael Bradley is still away with the US national team, Jozy Altidore is still out injured and Sebastian Giovinco hasn’t scored in a month.

So of course it’s the LA Galaxy coming to town, the team that TFC haven’t beaten since 2008 – which was the last time they beat them at BMO Field (CCL matches at SkyDome don’t count in this) – with the Galaxy boasting a ten game winning streak against Toronto, five of them wins.  Whee!!  What’s that you say?  Robbie Keane and Gyasi Zardes are both away on international duty and that has to be good, right?  Well yes, those are good things.  However the team with one of the most potent offences in the league does not rely upon Keano and Zardes alone; Gio Dos Santos (who chose NOT to go play for Mexico at Copa) has scored six goals and notched five assists, while Mike McGee has five goals.  Both players have almost as many goals as Toronto has scored all season – that’s more than a bit terrifying.  Don’t forget that ex-Red Alan Gordon is always a threat, especially if LA finds themselves needing a goal late in the game.  This will be no walk in the park for TFC this evening – there’s not much in the way of a sterner test that they could face.

This will likely be a difficult game for Toronto FC; they’ve yet to make BMO Field any kind of fortress this year and while a good team their early promise from the road has faded.  LA are also in somewhat desperate need a of a strong performance having also gone into the break on a four game winless streak – they will be looking to reassert themselves and get back to the top tier of the Western Conference.  As much as I want to see TFC back on the positive side of things I’m sticking with my podcast prediction of a 2-0 loss.  Prove me wrong boys, prove me wrong!