Home » Analysis & Opinion » Toronto FC vs Montreal Impact: Two Solitudes Derby Time – Can TFC Get Out of the Basement?

Toronto FC vs Montreal Impact: Two Solitudes Derby Time – Can TFC Get Out of the Basement? 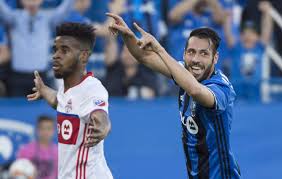 Normally the Two Solitudes Derby (what, not everyone uses that other derby name), is one of the games that everyone gets up for – they’re our closest rival, there’s an oft volatile relationship between the fans, and the games themselves are usually scrappy, wild affairs.  Coming off the heady high of advancing past Tigres in the CCL, TFC have to switch gears back to MLS play for a week (next week is a welcome international break), and take on the cheesemakers.

Hordes (I’m assuming) of Toronto FC fans have travelled to Montreal for today’s match – Montreal being a favourite away day, add to that the lure of St. Patrick’s Day and well, yeah lots of travelling support – so expect to see/hear a sea of red in one of the upper sections of the Big O.   That is today’s unfortunate location for this match; I say unfortunate as the cavernous confines of Stade Olympique, combined with the carpet that teams are expected to play on rarely makes for a really good footy experience.  The atmosphere gets sucked out of the place, you’re far from the pitch, and ugh that turf – it’s not good, there’s nothing else to say about it really.

However that turf, combined with the recent packed schedule and injuries to various TFC players will very likely see a much different starting XI.  Both Justin Morrow and Chris Mavinga left Tuesday night’s match against Tigres with injuries, and Victor Vazquez is still dealing with back issues – while Mavinga and Vazquez are basically cleared (Morrow is day to day), neither are 100% and the idea of risking them on the uncertain surface of the Big O seems unwise; especially with that bye week coming up.  Should the three of them not play (or play limited minutes), I think there’s a good chance that Ashtone Morgan gets a game, both Hagglund and Zavaleta lineup with Moor and Auro gets the right side (Van der Wiel is still adjusting to the game).  I’ve left Bono in (though wouldn’t be surprised to see Clint Irwin), and stuck Jordan Hamilton up top with Seba – though it could be Jozy (or Tos) instead.

The Impact of course snatched up Raheem Edwards in the off season – SIGH – and he’s had a pretty bright start with the cheesemakers.  Ex-red Dan Lovitz (he doesn’t stink?), is also with Montreal and seems to be doing well.  But really anyone that’s watching the Impact is paying attention to one player and that’s Ignacio Piatti (followed closely by Mancosu) – if Toronto can’t neutralize both players they could be in for a difficult afternoon.  The other interesting thing for this match is that neither team has won an MLS match as of yet; so this is the battle of the Eastern Conference basement, who will triumph?!  I can’t remember what my podcast prediction was (hey, 200th episodes take time), but I do think Toronto come out on top in this one – they’ve got a lot of confidence right now and are still carrying the disappointment of losing their home opener.  Let’s go with 2-1 TFC.