Home » Match Previews & Reports » Toronto FC vs New York City FC: Can TFC Hold On To Their Advantage and Advance?

Toronto FC vs New York City FC: Can TFC Hold On To Their Advantage and Advance?

So this is what it feels like to have a successful team – improved standings, vastly improved defence, winning their way into the playoffs and of course that wonderful playoff home win last weekend – this is what the other teams in MLS have enjoyed over the years, kind of fun isn’t it?  Of course this taste of success brings visions of the MLS Cup dancing in our heads – hey I’ll admit to similar thoughts, the ‘what if, what if they can do it this year?  What if the west results hold up and the Cup is played here in Toronto? WHAT IF?’

It’s weird this having of hope and not feeling like a crazy person for having this hope.  We hope; I hope – I hope that this is that time, that moment for Toronto.   But even if it isn’t – if they falter against the pizza rats (which I don’t think will happen), or don’t advance past the Eastern Conference final, this has been fun – jump up and down, hug your neighbour, celebrate like crazy fun.  It’ll be a very pleasant change to go into the off season not completely hating sports.

Toronto are in control going into today’s match against City-lite after their 2-0 win last weekend.  They don’t even have to win this afternoon to advance – though obviously that’s the most enjoyable way. 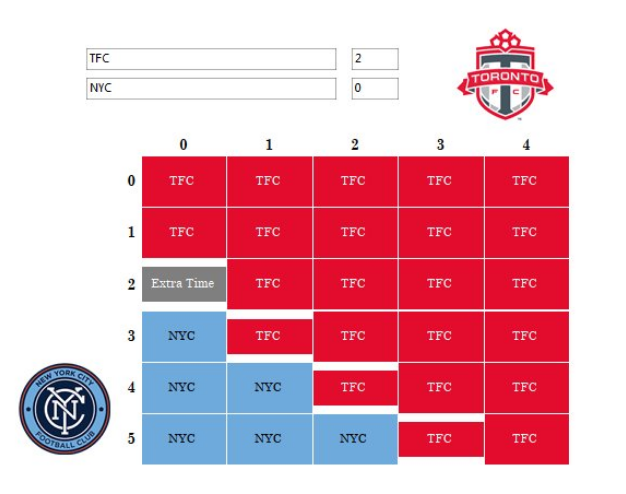 You can see the myriad ways that TFC advance (and the paltry few for the pizza rats).  That doesn’t mean that Toronto can go into the game quietly – they need to score to ensure that they are in control.  But any win or draw by TFC will mean they advance without causing heart palpitations for we the fans.

Playing on the teeny tiny pitch at Yankee Stadium is often ugly to watch and usually results in lots of goals, for both sides. And with the unsuspendable David Villa playing (hey is Pirlo fit now?) and Patrick Vieira likely going back to a more attacking lineup today, expect a lot more pressure and at least one goal from the home side.

But as I said, it’s Toronto that are in control of this game and luckily the majority of the squad are in good health.  I say the majority because it seems quite possible that Mark Bloom will be stepping into Steven Beitashour’s role at RB based on some reports from training.  Beitashour’s been knocked about a fair bit this season and Bloom’s improved each game he’s played so this wouldn’t be a terrible change, though Beitashour’s experience would be missed.  Everyone’s eyes (and expectations) however will be on TFC’s big 3: Michael Bradley, Sebastian Giovinco and Jozy Altidore – Toronto’s DPs will need to come up big today in order to propel the Reds on to the next round.  Bradley is coming off a fantastic performance in Sunday’s match, with Altidore scoring the game winning goal and Seba taking the brunt of NYC’s attention (and abuse).

The last game was a team effort (yay Tosaint scoring!) and as we said in our podcast this week, it was difficult to point at any one player and find fault in their game – they will need that same complete team effort in today’s game.  The narrow confines of the pitch make it a challenge for any visiting team, especially if you like to play a wide game – Toronto has been sticking with a 3-5-2 of late that has been fairly successful both in providing defensive cover but also in providing for the attacking players.  It’s been a lot of fun to watch and seems to have brought out the best in many of the players on the team.  It could serve them well today as it will help them quickly counteract NYC’s speed and more free-flowing play (again, there’s no way that Vieira is going back to the clutch and grab style they played last weekend).

I am expecting them to win today – not just advance into the Eastern Conference finals – but win.  They’re playing with confidence and trust in each other, they’ve a much better defence than the pizza rats and well, I want them to?  No really, I do expect to see them playing in the Conference Final in a couple of weeks – whether they go further than that I’ve no idea, but yeah let’s just enjoy this ride – come on boys get it done, we want another trip to BMO.