Toronto FC vs Orlando City SC: Can A Return Home Help Put Things Back On Track? 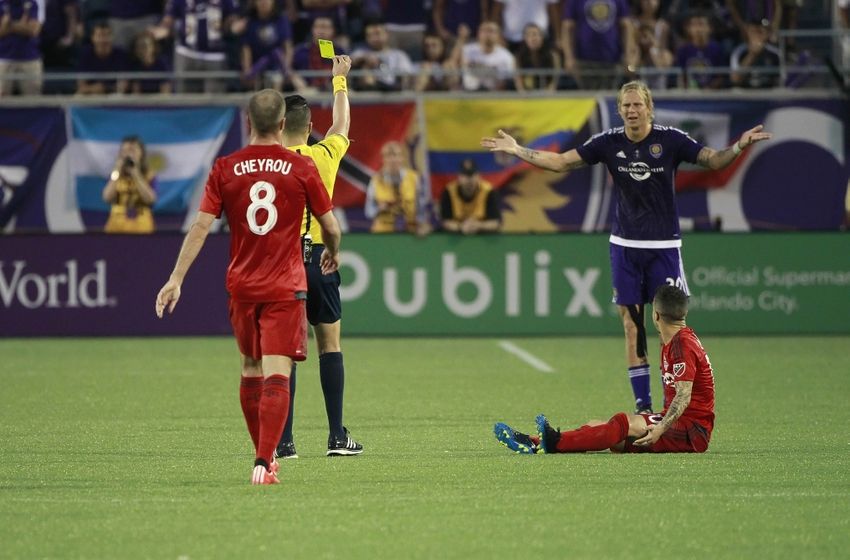 He talked smack about my hair! How is that a card?

In typical Toronto FC fashion this has been an up and down season – it doesn’t seem to matter who’s hurt, who’s suspended or if they’re playing at home or on the road – there’s been little consistency in the quality of their performances.  Their past two games have not been exactly things of beauty – regardless of three goal comebacks – and what’s been most noticeable is the bleeding of goals, the poor defending and a general lack of organisation.  TFC have only won once in the past five weeks (three times in the past two months), while conceding seventeen goals and scoring eleven.  The old adage ‘the best offence is a good defence’ has obviously never been uttered around Toronto FC; or if it has it’s locked in the same room as the ‘learn to defend set pieces’ notes.  We’ll see whether the focus they’ve apparently been paying to these deficiencies during practise this week is sinking in or not in tonight’s game (8pm, BMO Field, TSN).  Personally after almost nine years of inadequate set piece defending and a general inability to get their acts together, I remain sceptical.

I’ve said a number of times over the past month that one of the issues is whether or not Ashtone Morgan is playing – I steadfastly maintain that right now they are a better team with him in the lineup.  While not stellar every game, he has been more than solid and it allows the team to have two fairly good fullbacks each game as opposed to a spare part on the right.  Both his and Collen Warner’s return at holding winger will hopefully give the team the needed stability it needs to deal with Kaka, Cyle Larin and the rest of the purple people.  The Reds also need to see a more settled Damien Perquis and the Benoit Cheyrou from a month ago to keep things in line on the pitch.
Things You Need To Know:

1. Jozy Altidore is out due to stupidity and will not play.

2. Michael Bradley is out due to injury and will not play.

3. Ashtone Morgan is available and should play.

4. Collen Warner is back from suspension and will play.

5. Cyle ‘rookie of the year’ Larin is on a scoring tear – those of us that wanted to see him score goals, well we’re likely going to get our wish.

6. Some Brazilian guy – Ricky I think his name is – is pretty good and along with Larin is responsible for most of Orlando’s offence this season.

7. Aurellion Collin – everyone’s favourite (or in my case most hated) villain is back.  Expect him to be physical, dirty and get away with murder.

8. Eric Avila will probably come on and score as the game’s former TFC player rep.

9. Seba needs to get back to doing Seba things.

As with pretty much every game TFC play right now this one has implications for playoff and table position.  The mediocrity of parity that is the Eastern Conference hasn’t altered all that much – DC United are still the top team and that doesn’t seem likely to change any time soon.  The rest of the pack have to sharpen their games to stay above the red line and teams that Toronto FC may have considered beatable in the past are getting their acts together – our Reds have got to play with a lot more maturity and discipline in the coming weeks and make good on all the talk of a protracted home stand being what they need.  If Toronto can’t contain Larin and Kaka tonight or get Seba back into the offensive mix then it could get very ugly.  My prediction from the podcast: 3-2 to Orlando.