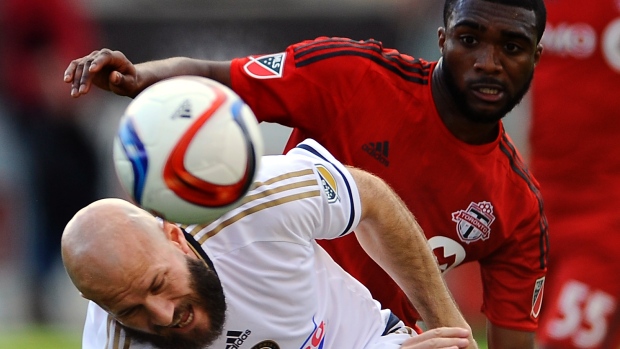 Today is Toronto’s only home game in July – BMO Field, 4pm, TSN – which means some sort of weather related disaster; what’s that?  It’s going to be the approximate temperature of the surface of the sun?  And it’s not a night game?  Sounds perfect.  Seriously though, it’s going to be hot. Damn hot. Which could actually affect the quality of today’s game against the Union.  Joyous.

It’s unfortunate if weather plays a part because TFC need a positive performance today; shipping four goals in each of their last two games and looking less than solid anywhere on the pitch for the full 90…well you could say they’re in a slump.  Whereas the Union have won three of their last four, most recently trouncing the Timbers 3-0.  Of course they’re coming here on a good run of form.  They’ve not been a good road team at all this season and have only won here twice – no we’re not talking about THAT game – so of course that means they’re going to win today, doesn’t it?

The Eastern Conference has a giant mushy middle with only first (DC United) and worst (Chicago Fire) so far away on either side of the equation that you don’t count them just yet when looking at results and so on.  The Union currently sit just below the red line but a win today would leapfrog them past TFC into a decent position. The race for sixth is still on!

1. Jozy Altidore is back: Is he fit?  Will he play, let alone start?

2. Ashtone Morgan is back: Huzzah!  Expect a more solid defensive effort today as the Nasty Left Back returns to the XI.

3. Jonathan Osorio is back: Likely will be starting and taking Michael Bradley’s spot in the midfield diamond which will shift everyone back to their normal spots – Cheyrou at the back, Warner to holding winger and sorry Jay Chapman, welcome back to the bench. You too Jackson.

4. Maurice Edu will not play: He is suspended due to yellow card accumulation.

5. It’s going to be a million degrees out: Wear a hat, and sunscreen, and drink lots of water.

6. Seba doing Seba things: He’s probably not going to score a hat trick today, but pass the ball to him anyway; if only because it is fun to watch him.

7. Nobody on the Union was born and raised in West Philadelphia.

8. Joe Bendik gets the start: Chris ‘Caveman’ Konopka is suspended for this game making Greg Vanney’s life much easier in getting Bendik back as his starter.

9. Conor Casey hasn’t played in over a month: He will likely come on and score the winner, just for shiggles.

11. CJ Sapong can still make you pay: pay attention to him

This is one of those games that Toronto should win; they should.  But a lineup that hasn’t been cohesive or coherent for a few weeks going up against a team (albeit missing their captain and a potent offensive weapon), on a pretty good run of form makes me a bit nervous.  However, good teams win these games and while TFC may not be a great team (they’re not), they are a good team.  Time for a statement game from TFC; I know that beating the Union just says that they’re among the best in that mushy middle, but again that’s what good teams do.  And if Toronto want to quell some of the negativity then today needs to see a much tighter effort, a lot more communication and someone other than Seba to score a goal.  Prediction: TFC 2-0 over the Union.