Home » Match Previews & Reports » Toronto FC vs Philadelphia Union: Will It Be Curtins For The Union In TFC’s First Ever Home Playoff Match?

Toronto FC vs Philadelphia Union: Will It Be Curtins For The Union In TFC’s First Ever Home Playoff Match? 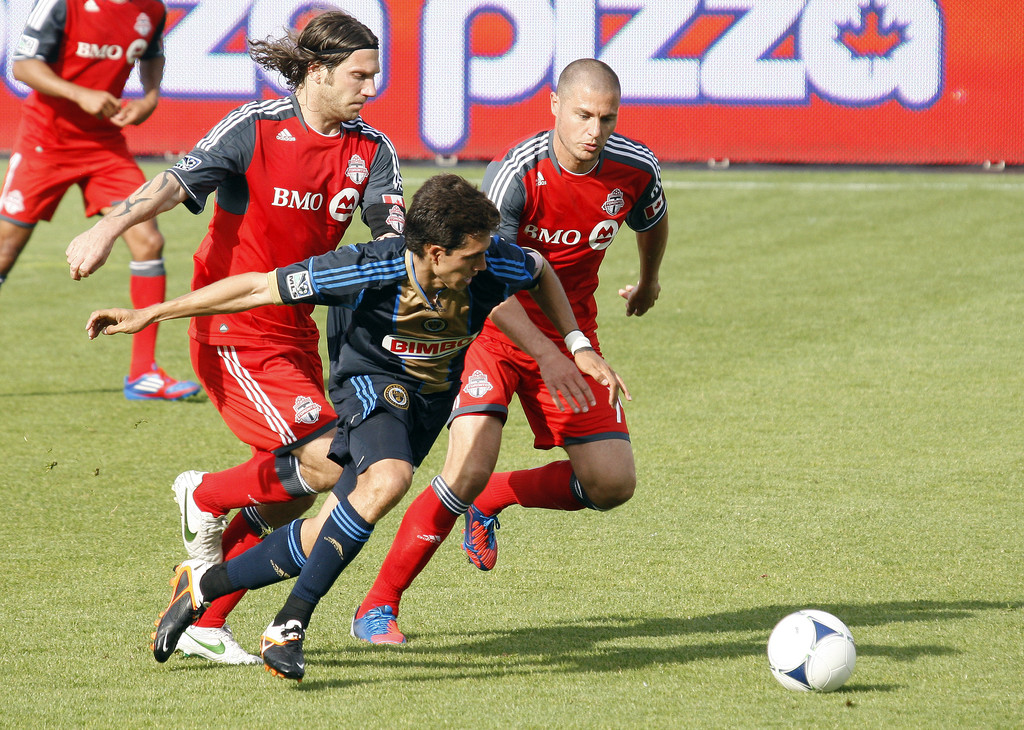 Wheee!!!  Here we go people, this is not a drill, Toronto FC have a home playoff (play-in?) game! Sweet! That’s right it is time for a little bit of TFC history tonight folks and I’ll admit to being rather excited – I’ll be more excited if we get to come back on Sunday – but today I’m pretty pumped about the whole thing.  Seriously guys this is a bit of a big deal – they win and it’s on to a two-legged affair for a trip to the Conference Finals.

A home playoff game (OK, play-in, wild card, whatever) is something that we’ve all wanted for as long suffering fans, fans that have watched our Reds either crash out at the last minute or get drummed out unceremoniously – but tonight we get to watch our team in a do or die situation at home.  It’s a mid-week game and as we all know it’s very last minute so we may have a smaller crowd than you’d want for such an occasion but should Toronto get past the Union, expect a full house this Sunday.  But for anyone that’s ever gone to a CCL match or a Voyageurs Cup match you know how much fun it can be to be in the stadium where everyone is hyped up and focused on the team – tonight will be one of those nights.

Playing the Philadelphia Union is pretty much the best scenario we could have asked for; sure playing the (Drogba-less) cheesemakers would have had a lot of satisfaction (and a bit of revenge for last season and so on), but this is about moving on to the next round, and hey it’s not like we don’t have history with the Union.

Philly have not had a good season and just crept their way into that playoff spot ahead of the tea terrorists; they bled goals (though they also scored their fair share) and they weren’t all that great on the road – yay for positives!  Other positives include Conor Casey no longer playing for the Union (bullet dodged there) and Maurice Edu being out injured – I’m not saying I’m glad he’s hurt, I’m not a monster! – just that it’s good for TFC not to have to face him.  On the flip side is the fact that Jim Curtin rested the vast majority of his starters on the weekend (the Union having locked up their playoff spot) so unlike TFC they’ll be well rested for the match.  They also have former DCU stalwart Chris Pontius (12 goals on the season so far), MLS Rookie of the Year contender Keegan Rosenberry, and of course there has to be an ex-Red so come on down Warren Creavalle!

TFC aren’t in bad shape though; yes they played on Sunday but no one got hurt, it was a home game so no travel involved, and possibly most importantly Sebastian Giovinco played the full 90 minutes in his second game back from injury.  Having Seba gelling with the team (and he looked much sharper on the weekend) is an important key to Toronto advancing in these playoffs – they need not only his goals (and assists) but also the distraction that he provides to opposition defences.   Toronto had three different goal scorers on the weekend (go on Justin Morrow!) which is important as they have too often relied upon Seba and Jozy Altidore to win them games.  Not that having two prolific scorers isn’t something a team should rely on, but oppositions work to shut them down leaving other players free to get open.

Greg Vanney has his entire first choice starting XI available to him for this game, which gives him options for the lineup as well as the formation.  Personally I’m a fan of the 3-5-2, but won’t be surprised to see a 4-4-2 – will he have Eriq Zavaleta at the back or give Nick Hagglund another shot?  And will it be Armando Cooper or Will Johnson?

This will be a hard fought game – there’s no return leg to plan for, no away goals – just win and move on.  Toronto have a lot of expectations weighing on them from fans – this year hasn’t yet been a rousing success and while finishing third and with their most points ever are both things to celebrate, we want more.  Now that they’ve shown us that they can be successful (remember those days in first place), we expect more from them – they are hitting my bare minimum for success this season with tonight’s home playoff game but I see the potential to at least get to the Conference Final.  I do expect TFC to win tonight and that will be a wonderful thing to experience.  Come on boys, let’s do this.