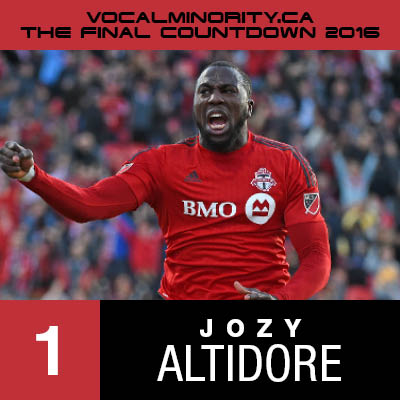 Mark: 1 – Quite the tale of two halves and I’m a sucker for a redemption story.

On May 15th, a game against Vancouver, the version of Jozy Altidore, the one that was brutal and had the “press” coming to his defense, hit a new low.  Perhaps even a bottom.  Goal drought, down by two, gets a penalty saved then pulls up lame and while he was off the pitch and Babouli waiting to be announced as his substitute, Toronto pulls one back.  The metaphor that he was such a liability, without him, down a man, was better off than when he was on the pitch, was cemented in that 4 minutes.

The irony wasn’t lost on me.  I was frustrated.  How could Jozy Altidore be this mediocre?  Even my wife was calling him out, and she doesn’t “sport” much.

It turned out he injured his hamstring.  Not the wonky one, the good one.  Welcome to the darkest times.

Somewhere along the way, there was rehab with heavy doses of struggle, pain and sweat. Probably an epic training montage with inspiring 80s rock in the background would sum it up nicely.

Then he came back.  He was fully rehabilitated.

He came back very confident.  Something I had noticed that was diminishing in the before time.  In the long long ago.

He came back stronger.  Bullying and terrifying defenders.  Back to goal laying off sweet passes.  Holding up until support arrived.  Making shots out of half-chances.

That’s not a comeback, that’s a full-on redemption.

And then there was the playoffs.  Played in all 6 matches, 5 goals and 3 assists.

This is the version of Jozy Altidore we’d been promised.  He’s here.  He’s real and he’s fantastic. #Seinfeld

The return of Jozy saw clever passes, bowling through multiple defenders, throwing himself at crosses high and low.  His positioning was much improved, pulling defenders out of position, awareness of where the ball was and where he needed to be.  And the finishing was often skillful.  Yes, I’m on the bandwagon.  And if you’re not at this point, I don’t know what could ever get you on it.

And I’m not even going to go into the details that is the wonderful, electrifying striker partnership between Jozy and Tosaint Ricketts that is known around the footballing world as #ALTITTS *hey*.  I get goosebumps when they’re on the pitch together.  It gets crazy, yo.

Mr. Altidore, congratulations on one hell of a season, story, comeback, recovery and journey.  We have been privileged to see it in person. And on TV for away games.

Kristin: 1 – I was surprised to put Jozy at No. 1; but then again, I could have flipped any of the top 4 and probably been good with it.  Similar to Michael Bradley – maybe even more so – I was unconvinced that Jozy was worth the time and certainly not the salary.  Occasional nice goals do not a DP make and I’d been unconvinced by anything else.  And then came post Copa America Jozy; goals, strong set-up play, seemingly boundless energy and just so impressive – especially in the playoffs.  This is the Jozy we were told we were getting.  Whether it lasts who knows, but without him down the stretch doubtful they make it as far.  More of this please.

Duncan: 3 – Meh for the first half of the season, but when he came back from Copa America played really well for a remarkably long period of time. We’ve seen flashes of AZ Altidore before but not for a half season plus playoffs stretch. Let’s hope we get more of that next year.

Duane: 1 – He’s the difference between a middling season, and being an inch from MLS Cup.

David: 2 – His contribution since coming back from injury and in the playoffs promoted him to #2 in my mind. This is the Jozy we’re paying to see!

Richard: 3 – Creates so much space for the shortarsed one.

Mel: 2 – Goals, goals, goals. The only thing that seemed to stop Jozy this year was Stephan Frei.

Jen: 2 – He is a beast and he is American and also he scored actual goals, including important ones, did you notice he was often where he needed to be at key moments, maybe you all needa pay more attention; this message paid for by Kurt Larson (just kidding).

Mark HSV: 1 – Maybe a bit controversial, but for me Jozy was the most important player for TFC, even if it only started about halfway through the season. When he got injured missing a PK mid-season it was pretty pathetic. But he came back with a vengeance and scored a ton of goals and looked so strong that he could power through other teams’ defences single-handedly. I think that inspired the rest of the team and he basically pulled TFC into the playoffs on his back. Had a great playoff run too. Really showed the kind of skill he has and hopefully has won over his doubters for good. I hope for more of the same next year. Thrilling to watch.

Steve: 2 – Justified his existence this year imo – last half at least.