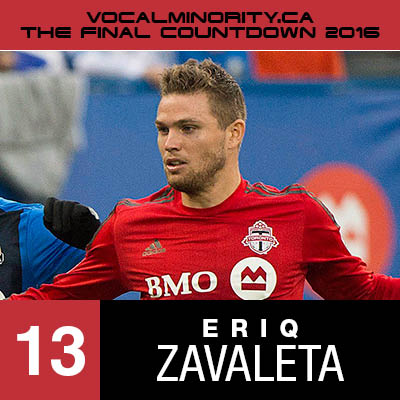 Duncan: 15 – Did a decent job at the back alongside Moor. Unspectacular, generally unmemorable, but those are both good things for defenders.

The nifty nephew (don’t call him that though) had himself a decent season really didn’t he? not at first obviously, but as the season wore on and after Perquis had left he got more and more playing time and ended up becoming an ever present alongside Moor and Hagglund in that back 3. There’s precious little I can remember from him really, there’s nothing outrageous that sticks in my head, and for a central defender you really can’t complain about that, even if it does make for a dull writeup of his season. He certainly did a good job keeping the American Jordan Morris, Jordan Morris, quiet in the cup final

Here’s a bit of what I wrote about him after the 2015 season:

“I imagine he’ll be back next season, and in the happy hypothetical world where TFC get themselves a very competent centre back and a good defensive midfielder, he could well do a good job as the second centre back. I’d  be even happier if he’s battling with Hagglund to be considered the first backup option behind two as yet unknown competent centre backs. I could see him sticking around at that ‘almost but not quite starter material’ level for plenty of years in MLS.”
Well, they got that one very competent centre back and it all worked out quite well really didn’t it? I’m pretty much at the same place now. I’d be fine with him as one of 3 centre backs if that formation continues, and it wouldn’t be the worst thing in the world if he was Moor’s partner in a 2 centre back lineup instead. But I wouldn’t be all that confident in that, I do think the defence looked better as a 4 man unit with Perquis than with Zavaleta, so ideally management will be able to sign another experienced but affordable defender and Zavaleta can battle with Hagglund for the 3rd option.
All in all it’s not bad, and apparently it’s good enough for El Salvador to try and call him up, quite a surprising detail to find out when searching for something to write about, good luck to him with that if he decides he wants it.

Tony: 13 – Not just family but a decent MLS defender. Prefer as depth but solid.

Kristin: 14 – The nifty nephew did better than I expected; looked solid in the back 3 – would still prefer an experienced CB next to Moor but good to see him develop over the season.

Mark: 12 – Found a role in the back along side Moor and benefited from his leadership.  Has done very well for himself.

Mark HSV: Really improved this season with Drew Moor beside him and became part of the surprisingly solid 3-man defense for the playoffs. Great to have a solid young defender starting for TFC.

Mel: Getting better each year

Jen: I remember him on the field and very little else about him

Richard: Improved but still learning. Wish he was more Pablo than Eriq 😉